Josef Newgarden landed the 13th pole of his IndyCar career and his third at Road America after sticking with the harder primary tyres in the final segment of qualifying.

Colton Herta was the first driver to get below 1m47s as the teams debated over whether to run used red soft tyres which were degrading rapidly, or the primary tyres which were capable of squeezing out three rapid laps, even if the ‘peak’ lap wasn’t necessarily higher.

Only Newgarden and engineer Gavin Ward, who had seen their #2 Penske clock fastest times on either kind of tyres in the previous practice session, had the courage of their convictions and stuck to the primaries, and their reward was pole by almost quarter second over Herta’s Andretti Autosport, turning a 1m46.0186s.

After qualifying Newgarden admitted he was surprised no one else had done the same.

Jack Harvey was an impressive third fastest for Meyer Shank Racing, and will start alongside Will Power who switched toward Newgarden’s set-up before qualifying.

Alex Palou’s car looked a handful on either tyre compound, but he will be the highest of the Chip Ganassi cars, ahead of Simon Pagenaud in a third Penske car who completed the top-six shootout.

In the Q2 session on the black tyres, Power, Pagenaud, Herta, Newgarden, Harvey and O’Ward made up the initial top six, Power’s best time being 1m46.5745s.

Palou’s first flier on reds was over four-tenths quicker than that, while Romain Grosjean for Dale Coyne Racing fell a tenth short of that, before nailing a 1m45.9s with his next effort.

However, he was by no means safe, and the times tumbled in the last three minutes, with Harvey nailing a brilliant 1m45.3612s to go 0.16s faster than team-mate Herta.

Behind him three Penske drivers and Alex Palou bumped Grosjean out of the top six spots, although he was faster than two more Andretti cars of Ryan Hunter-Reay and Alexander Rossi, meaning the former Formula 1 driver had to settle for seventh place. 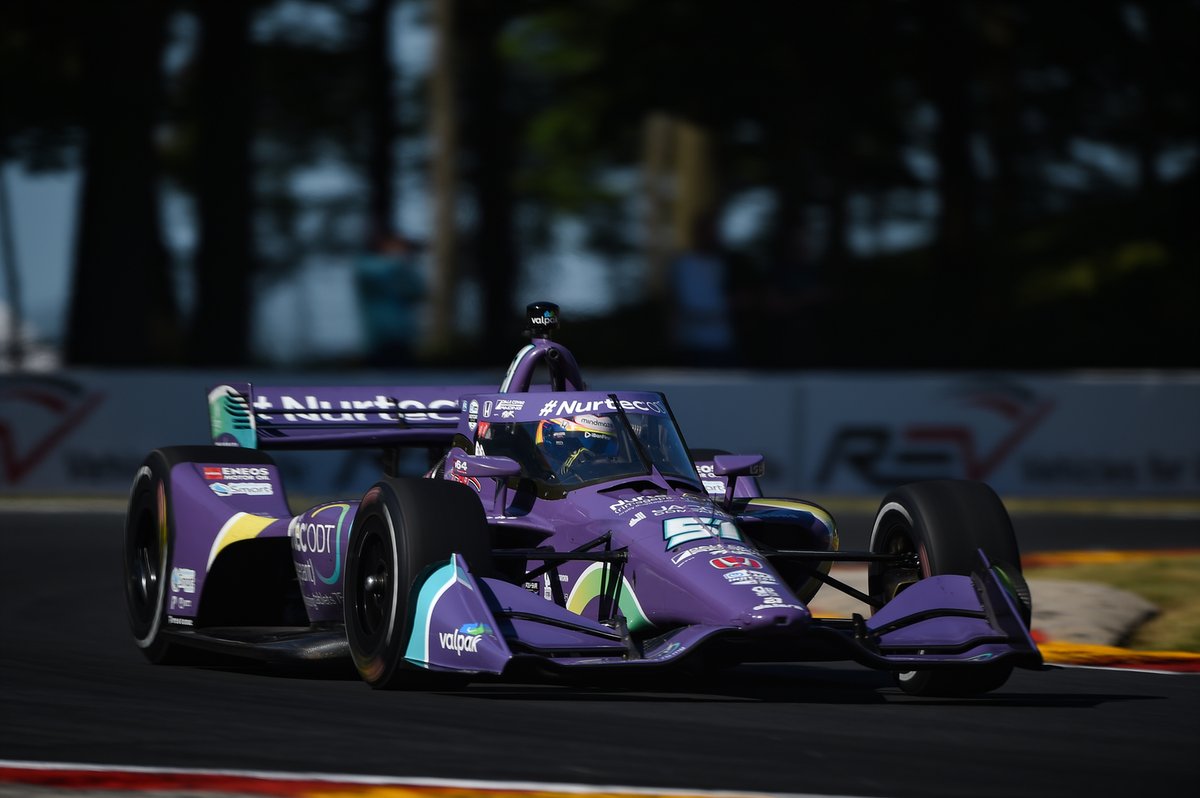 Championship leader Pato O’Ward could only claim 10th for Arrow McLaren SP ahead of Sebastien Bourdais and Ed Jones who completed the Q2 contenders.

Reigning IndyCar champion Scott Dixon was eliminated early in the Q1 qualifying group stage in seventh place, bumped out by a late improvement by Pagenaud in the first group, with Dixon limited on track time having only run one lap on reds this morning due to debris damaging his car’s underwing.

IndyCar debutant Kevin Magnussen was also eliminated at the same stage as Dixon, with the Danish driver substituting for Felix Rosenqvist in the #7 Arrow McLaren SP car this weekend. Magnussen ended his group qualifying 1.6s off the ultimate pace but ahead of Jimmie Johnson.