Josef Newgarden says he feels “pretty sad” to have led 67 of 70 laps in the second race of the Detroit Grand Prix and lose out to the charging Pato O’Ward.

The Team Penske driver set a scintillating pole position in the Sunday morning qualifying session and starting on primary tyres, he had to charge forward while he could, in order to shorten the stint on which he’d run the fragile alternate compound tyres.

A late restart while he was on his final stint on the soft tyres saw the two-time IndyCar champion pull away from his nearest pursuer Colton Herta by 1.1s before the yellow flew again. Although Newgarden again defended well from Herta, he had no answer for the pace of the charging O’Ward, as his own tyres started “falling off the cliff” in terms of grip.

Newgarden, who at least was able to hold off Alex Palou and Herta to the chequered flag to take second place described himself as “sad, just pretty sad.”

“It was a fun strategy, we were doing well. Just the caution killed us, my rear tyres were shot, we didn’t need that. We tried, we went for what we went for, it just didn’t fall our way at the end, so it’s pretty sad.

“Very happy for a Team Chevy 1-2, it’s a big thing here in Detroit and for Penske. Just disappointed. We felt like we had the car to do it.

“[O’Ward] was coming like a freight train – what are you going to do? I just couldn’t do anything. And Palou, to be honest, Alex was right behind me and about to pass me too. To be honest I was just trying to hold him. 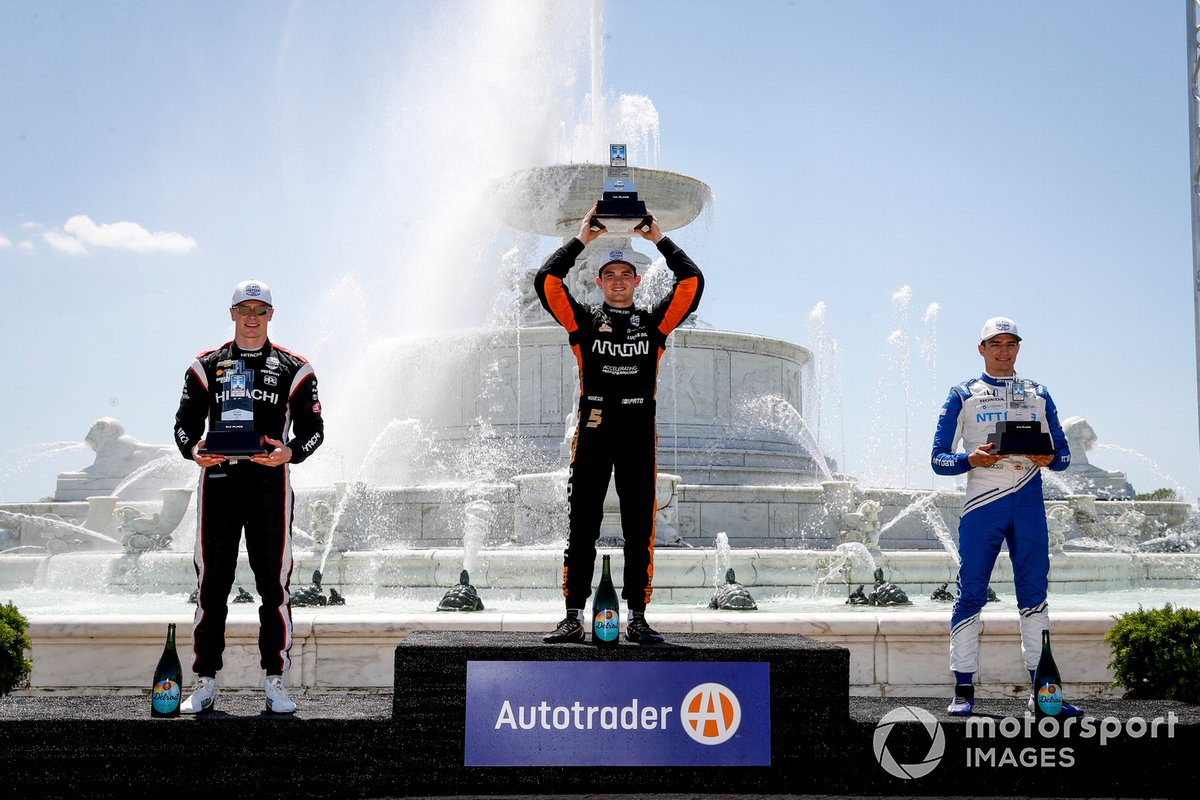 “I had so much wheelspin, my tyres were shot to death for the last 10 laps. Just trying to be aggressive in the resets on the restart, which kills you even more. None of it played into our favour. But especially on that first [pitstop], we had to stop [when Dalton Kellett’s car ground to a halt at pit exit] because we weren’t sure if they were going to full-course caution. If we don’t pit [and a caution] we get completely hosed.

Later, Newgarden was asked if he felt the team’s strategies were too risky, and he responded: “Nope, nope, I wouldn't change a thing.

“Look, you can't predict these races. You can look like a hero or a zero pretty easily in this sport, so yeah, I wouldn’t ask anyone to change anything. I think they're doing all the right stuff, it's just not worked out.”

Newgarden also shrugged off the contact he and O’Ward made on the 170mph back straight as the Arrow McLaren SP driver passed him.

“Definitely I think [it was] on the limit, but I think it was good hard racing,” he said. “There's a kink on the back straight so it's not perfectly straight, so to be fighting side by side, I think you probably get a little bit of contact like that. It's not completely abnormal down in that section of the track.

“But he was coming like a freight train. My tyres were cooked, and he was having great drive off the corner, as you saw. I think that's what kind of did us in. It almost did us in with Alex, too. Thankfully we were able to hold on to second, but yeah, just hard racing.”