Newgarden took the top spot with a 1m08.224s in the Fast Six shootout, with reigning champion Scott Dixon claiming second having missed out on pole when he caught Helio Castroneves around the street circuit in the final part of qualifying.

Castroneves' initial time of 1m08.482s was good enough for third, ahead of Simon Pagenaud, Felix Rosenqvist and Romain Grosjean.

Championship leader Palou will start on the fifth row after failing to make it through to the shootout with a 1m08.946s. The Spaniard,  who brushed the wall at Turn 4 in the first Q1 group, holds a 35-point lead over O'Ward and will start directly behind his rival for Sunday's race.

O'Ward was lucky to make it through to the second part of qualifying after his Arrow McLaren SP crew were called into action to repair a bent left-rear toelink after contact with the wall, as the session was headed by Newgarden.

O'Ward wasn't the only car that required repairs during the sessions, as Will Power was another to take damage when he collected the Meyer Shank Racing machine of Jack Harvey which had crashed at Turn 8, with the Penske machine sustaining left-rear suspension damage.

Practice pacesetter Colton Herta couldn't put his speed to good use in the second group of Q1, deciding not to use the faster red-walled Firestone tyre until late in the session before suffering a broken toelink, which left him languishing down in 14th on the grid. 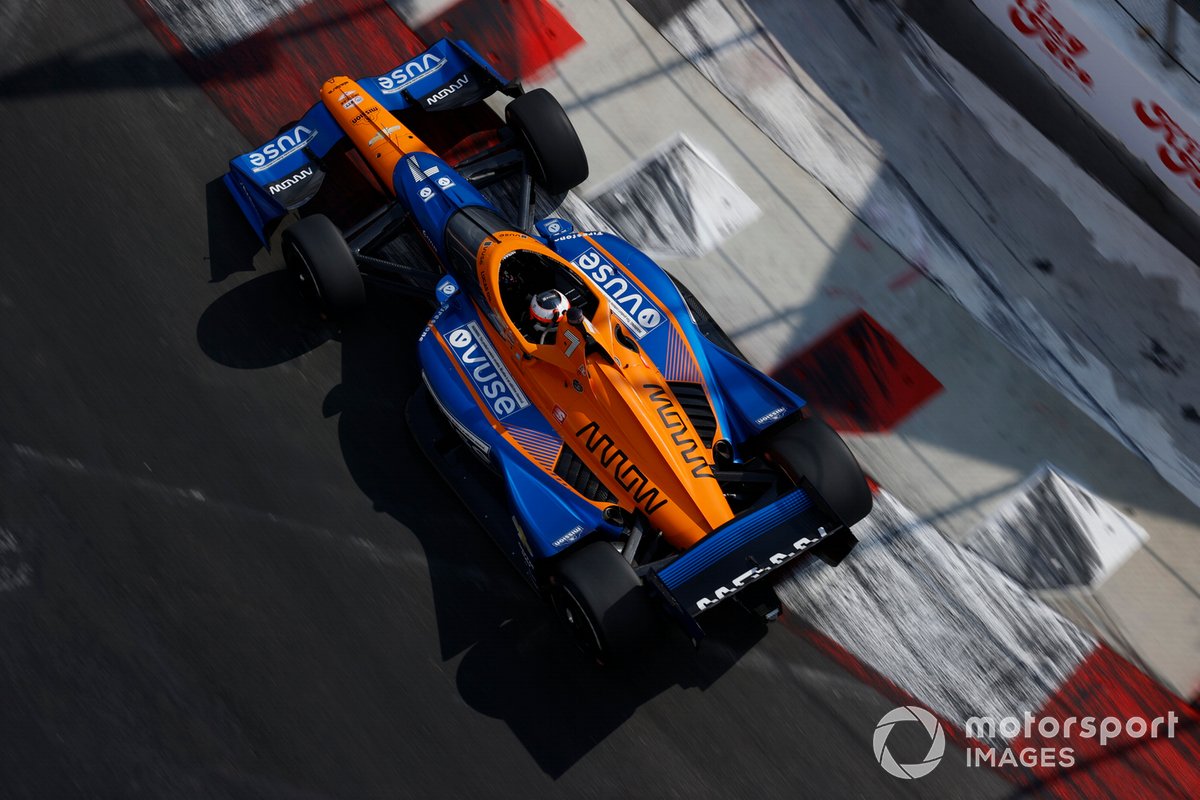 Rosenqvist topped the second Q1 group ahead of Pagenaud and Castroneves, but fourth-placed Grosjean was initially under investigation for an incident with Oliver Askew. However, it was Askew not Grosjean who was penalised with the loss of his two fastest laps.

There were further investigations in Q2 following Power's brush against the T9 wall, the Penske driver having struggled with gearshifts - likely a lasting legacy from his collision with Harvey earlier in qualifying.

With his car stopped at T10, local yellows were deployed and it appeared Dixon, Rosenqvist, James Hinchcliffe and Ed Jones had improved their times through the caution zone.

Their improvements knocked O'Ward out of the final part of qualifying with only Jones penalised.

Hinchcliffe's best time put him seventh, while Jones was demoted to ninth having lost his best time.

Ryan Hunter-Reay, who will end his 12-year stint with Andretti Autosport after the race, will start 11th ahead of Power, Scott McLaughlin and Herta.