Leading drivers: Indy 500 overtakes will be harder with new aeorkit

Track position will be crucial in the 2018 Indianapolis 500 because IndyCar's new aerokit will make overtaking more difficult to achieve, say drivers Scott Dixon and Marco Andretti

This year's race will be the first to feature the 2018 universal aerokit, which has reduced overall downforce and caused drivers to brake and lift off in corners on ovals.

After the first week of testing for the Indy 500, AJ Foyt Racing's Tony Kanaan admitted to being surprised by the acceleration onto the straights and how he had to "hang on" in the corners.

Andretti's Alexander Rossi previously told Autosport during the first week of testing that the feel of the car was "weird".

"You can definitely feel that there is less grip but that doesn't really take confidence away from what you are doing," he said.

Rossi and the IndyCar field had not conducted much in the way of traffic management or drafting during the first week of testing.

That has changed in the second week of practice, and both Dixon and Andretti believe they now have insight into the challenge of overtaking with the new aerokit.

"It's tougher, [the race] will be more about track position," said Andretti. "Scott and I were talking about this a little earlier.

"[But] I prefer it to be track position. Once you get to the front and you have a good car, you should be able to stay there instead of being a sitting duck. 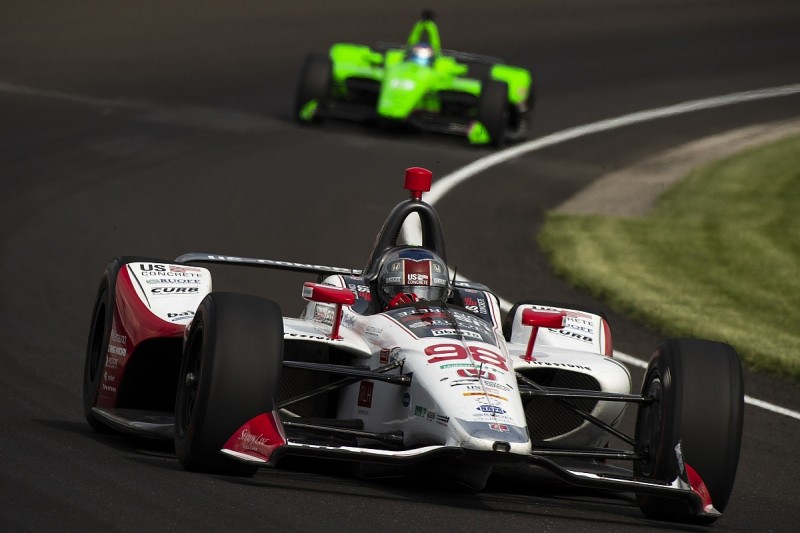 "However, if you're third or back in line, it's going to be very tough [to pass].

"It's going to take discipline to wait for the guy ahead to have a go and have a big wash-out, and then you get him."

Dixon agreed with Andretti but warned that it was only a first impression.

"It's early days," said Dixon. "I think we found some things that helped us, helped that issue specifically.

"The track temps are pretty high [on Wednesday afternoon]. That typically falls in that category [of making passing harder], too.

"But even if the guy gets a bit of a wash-out, but still has enough of a train in front of him, the acceleration [from the tow] is just insane.

"So it's really hard to pass that guy even if he does make a little bit of a mistake, whereas momentum seemed to be a bit of a key last year."