Tony Kanaan put AJ Foyt Racing at the top of the times during manufacturer testing at Indianapolis Motor Speedway, but the strong winds led to IndyCar teams packing up early

Chevrolet-powered Kanaan lapped the iconic 2.5-mile oval at an average of 226.680mph while running qualifying boost (1.4-bar), while Ed Carpenter was second with a 224.466mph best.

Gabby Chaves, at the track where he drove for the Harding Racing team on its debut last year, was third on 223.658mph.

SPM's general manager Piers Phillips, who also calls Wickens' strategy, told Autosport: "He was amazing for what was his first proper test day at IMS.

"He was confident, gives great feedback and he picks up on all the little things he should.

Charlie Kimball, who finished third at Indy in 2015 and led five laps last year for Ganassi, was fifth quickest for Carlin ahead of the second Foyt car of Matheus Leist. 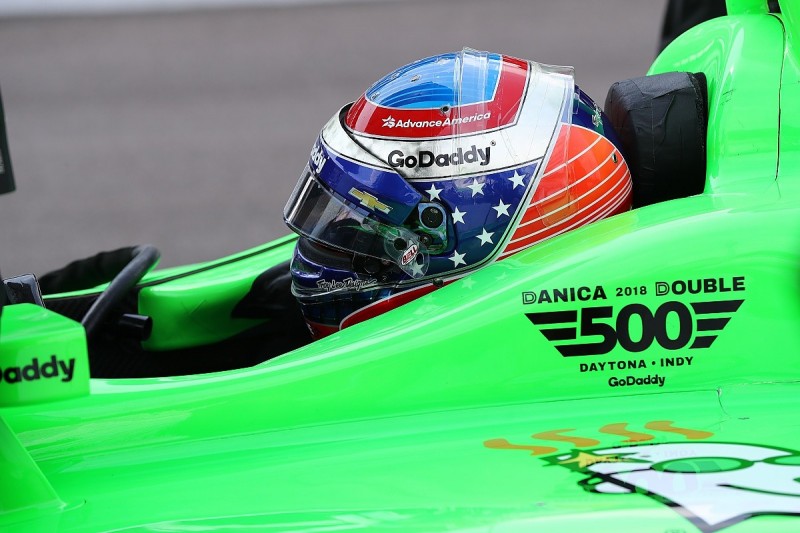 The Chip Ganassi Racing cars of Ed Jones and 2008 winner Scott Dixon were seventh and ninth, split by Danica Patrick in the second Carpenter machine.

"I was flat out...so everything has felt really good," said Patrick.

"It's just a matter of working on little feelings I have as well as trying things, because quite honestly it feels pretty planted so it's just small little changes and kind of feeling how the tires go over the course of the 20-some laps.

"There's no point in rushing. Even sitting on pit lane after doing 20-some laps, I was like 'Let's be mature. Let's go back, let's make sure everything is where we want it to be and be methodical and come back out here.' That's what we did.

"Today was about building confidence, not breaking it, so even if all I do is drive around with really nominal changes all day and just kind of keep feeling it and feeling it, that is a successful day today."

Patrick missed feeling 'relevant' in IndyCar while racing in NASCAR