Hinchcliffe made what appeared to be the decisive move for victory with 40 laps remaining of the 300, sweeping to the inside line to pass long-time race leader Josef Newgarden.

But Hinchcliffe had to make a race-deciding call in the final six laps when Ed Carpenter began to spin before Takuma Sato clattered into Carpenter and straightened him out, with the caution thrown for debris.

Hinchcliffe chose not to pit when the full-course caution was called, unlike nearest rival Newgarden, but the pace car took the field to the chequered flag before a restart could take place.

That meant Newgarden threw away a podium place, ending up fourth.

Hinchcliffe's deserved win came despite Newgarden dominating the majority of the race after deposing polesitting team-mate Will Power early on.

But Hinchcliffe built his platform for victory after a strong opening stint lifted him from 11th on the grid to fifth within the first 18 laps.

It took just under another 30 laps for him to join the battle up front, passing polesitter Power for second and following Newgarden.

Newgarden and Hinchcliffe were evenly matched on stints, able to complete 80 laps comfortably on both fuel and tyres, along with the highly impressive Spencer Pigot in his first IndyCar race at Iowa.

In the second phase of a three-stop strategy, it became increasingly clear that Hinchcliffe's SPM-run car became quicker late on in the stints and was better suited to the traffic the short Iowa lap is famous for.

That advantage paid off when he finally passed Newgarden for the lead and cantered comfortably clear of his rival before Carpenter's caution sealed Hinchcliffe's first win since Long Beach last year. 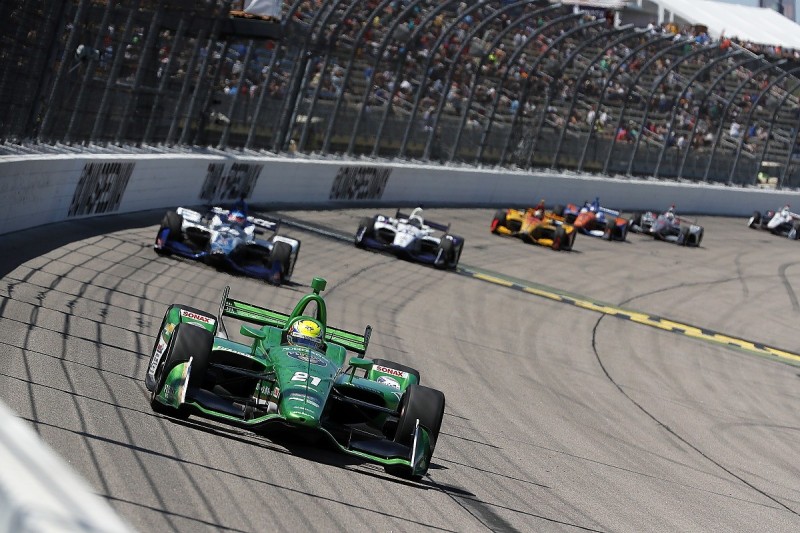 The late drama elevated Spencer Pigot to second place, his first IndyCar podium after largely matching the stint length of Hinchcliffe and Newgarden throughout.

Despite the collision with Carpenter, Sato maintained third to round out the podium positions ahead of Newgarden.

Hinchcliffe's team-mate Robert Wickens looked set for a podium place before he gambled on fresh tyres when Carpenter caused the caution, instead finishing fifth.

Penske's Power never recovered from losing the lead to Newgarden early on and took sixth.

Simon Pagenaud also failed to make up ground, falling from a starting position of fourth to eighth at the flag.

Alexander Rossi's hopes of fighting for the win ending when he stalled after exiting his pitbox following his first stop.

Having been initially classified 10th at the flag, Rossi was promoted to ninth ahead of Carpenter as the race results were determined from the positions on lap 298 of 300.

Sebastien Bourdais continually ran the longest stints of any driver to finish 11th, meaning he only made up four places from his grid slot.

Championship leader Scott Dixon had a difficult first stint in which he struggled to feel confidence in his Chip Ganassi Racing-run machine and finished 12th ahead of team-mate Ed Jones.

Serial Iowa winner Ryan Hunter-Reay had been a continual presence in the top five but suffered a broken toe-link that dropped him out of contention before he eventually retired late on with what Andretti called an "issue in the rear of his car".