Having unleashed his latent pace on the opening stint to rise from his starting berth of seventh, VeeKay had cycled out in a net fourth after the first round of stops were completed.

This became third when Jack Harvey – who had run the first portion of the race in second after diving past the front row-starting Josef Newgarden off the line – suffered a slow stop, compounded by a puncture which threw the Meyer Shank Racing driver out of contention.

Making his second stop a couple of laps before the majority of the field to pre-empt the pit window, VeeKay then used his warmer tyres to pounce on Alex Palou, who had been attempting to put a lap on Jimmie Johnson.

Grasping the opportunity of a double-tow into Turn 7, VeeKay threaded his car between the Chip Ganassi Racing pair and took second place in swashbuckling style.

When Grosjean made his own second stop, running a little deeper into the race, the Frenchman collected the harder compound tyres and exited the pitlane with just a slender advantage over VeeKay. 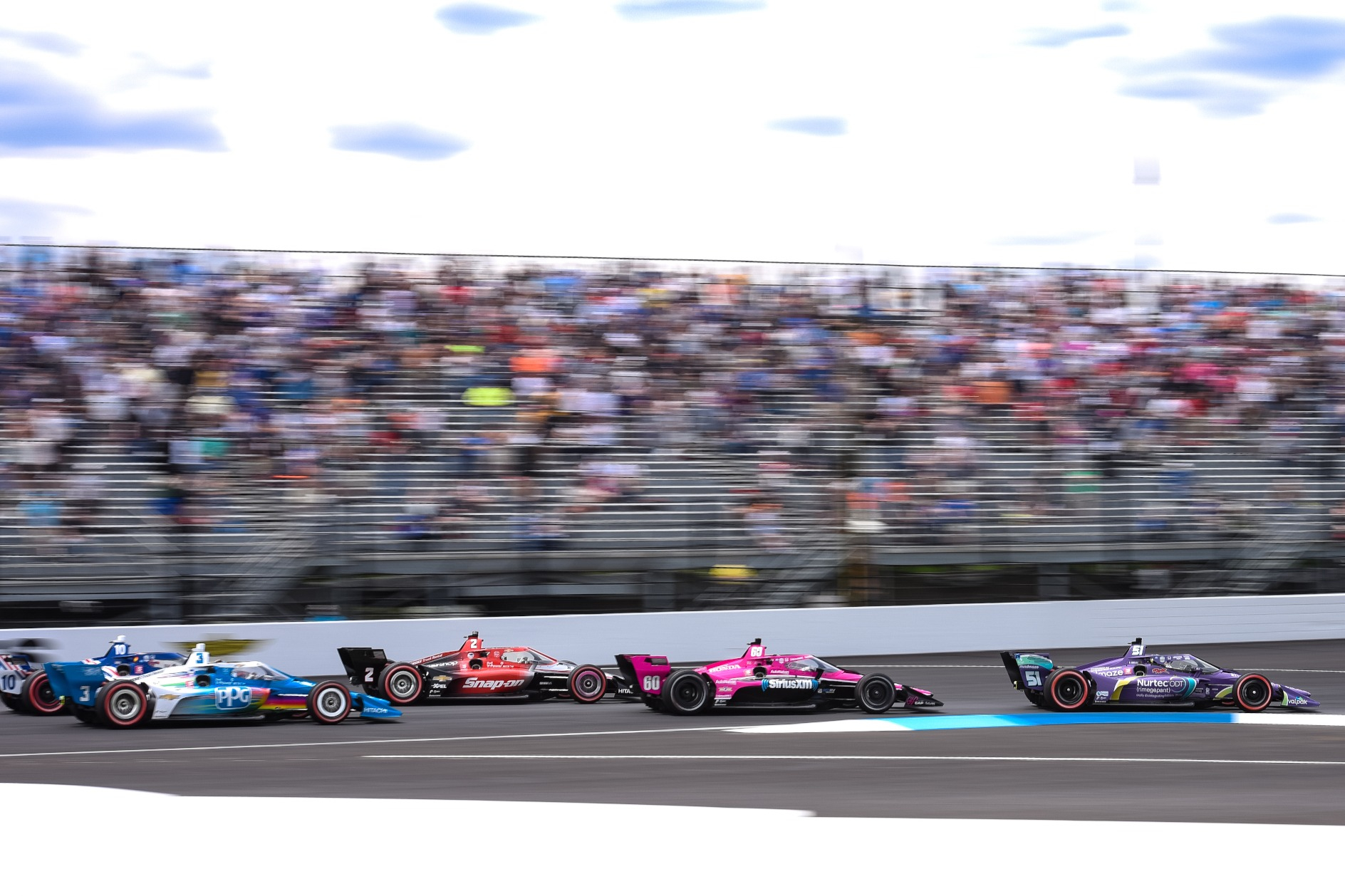 Grosjean leads into Turn 1 at the start

Dutchman VeeKay then immediately applied pressure to Grosjean, and although he managed to hold the lead into the oft-employed Turn 7 overtaking hotspot, VeeKay chased him through the following corners and dived past to claim the net lead of the race.

VeeKay was then left in clean air after the off-cycle Scott Dixon pitted, building a 3.5s gap over Grosjean before hitting traffic in the form of series returnee Juan Pablo Montoya.

Grosjean was able to wind the gap down, but Montoya soon became a problem for him instead as VeeKay took the chance to build a considerable buffer over the Dale Coyne Racing driver – helped by the lapped AJ Foyt machine of Sebastien Bourdais keeping his countryman caged in the final stint.

Although Grosjean then began to close the gap after eventually clearing Bourdais, VeeKay had enough fuel in the tank to become the first Dutch winner in an Indycar since Robert Doornbos’ 2007 Champ Car win at San Jose.

Palou finished in third, but suffered a prolonged final stop when his rear-right wheel was slow in going on.

Running the hard tyres, this left the Spanish driver at risk of being passed by Newgarden, but the Penske runner was unable to use his tyre advantage to keep Palou in his clutches – leaving the two-time IndyCar champion having to be content with fourth.

Graham Rahal put an ignominious start to the race behind him, finishing fifth having been a lap down under the first caution period – brought out for the stranded Conor Daly, who had been tagged at the start by Simon Pagenaud. 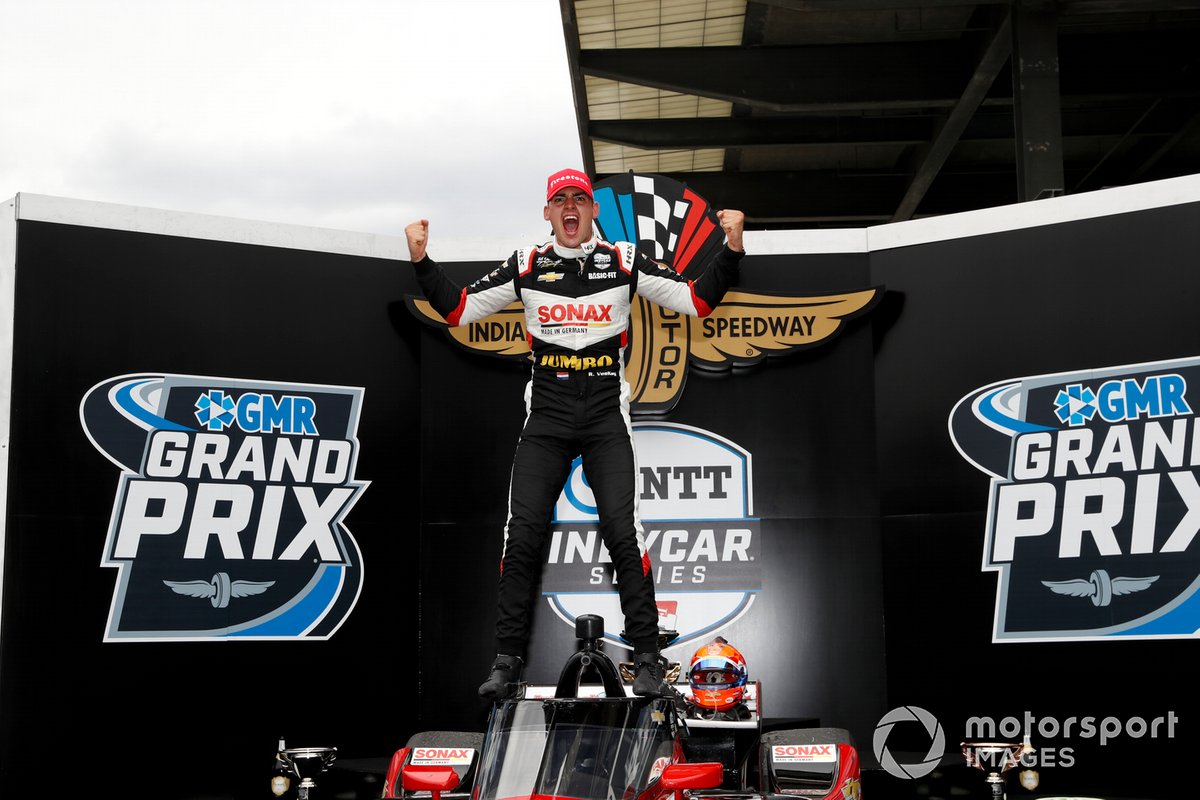 The Rahal Letterman Lanigan driver was notably exasperated over the radio following two successive stops on laps 2 and 3 to fix damage to his rear-left fender.

But Rahal expertly saved fuel throughout the race to help him leapfrog a great quantity of the field as a result as he got back on terms with pitstops, and just managed to hold station from Penske’s Pagenaud with a greater quantity of saved push to pass.

Alex Rossi managed to overcome engine issues, with which he was left down on power on the straights, to finish in seventh place – beating reigning Supercars champion Scott McLaughlin by 2.9s.

Dixon finished ninth after also stopping under the first caution; the 2020 champion had to take evasive action at the first corner after qualifying deep in the field and had to revert to an out-of-sync strategy to find his way back up the order.

His team-mate Marcus Ericsson completed the top 10, having been in touching distance of Dixon by the end of the race.

The Swedish driver had a dicey moment with Colton Herta at Turn 7 with 18 laps to go as the two coalesced in the middle of the corner, Herta having to escape to the grass which cost the St. Petersburg winner numerous positions.

Herta finished 13th, behind Will Power and Ryan Hunter-Reay, as Ed Jones was within a second of the Andretti driver by the close of the race.