The race was defined by a mix of two and three-stop strategies. As was the case in the opening race of the weekend, Hunter-Reay made an early first pitstop after starting 10th.

Polesitter Rossi led the race at this point, the two stop approach proving popular with the majority of the front-runners.

When the strategies converged after the final stops, Hunter-Reay emerged in second, 7.6 seconds behind Rossi.

He reeled in the race leader at over a second per lap and caught Rossi with 10 laps to go. Four laps later, Rossi locked-up in the heavy braking zone at Turn 3 and drove into the escape road, allowing Hunter-Reay through to win for the first time since Pocono 2015.

The 2012 series champion made up significant ground prior to his second pitstop, crucially overcutting Robert Wickens, who was also on a three-stop strategy after starting second.

Hunter-Reay recorded consecutive fastest laps, which put him in position to take advantage of clean air and overcut Penske's Will Power after his final stop.

Rossi, who entered the race as the championship leader and led the most laps, finished an unrepresentative 12th after returning to the pits with a puncture. 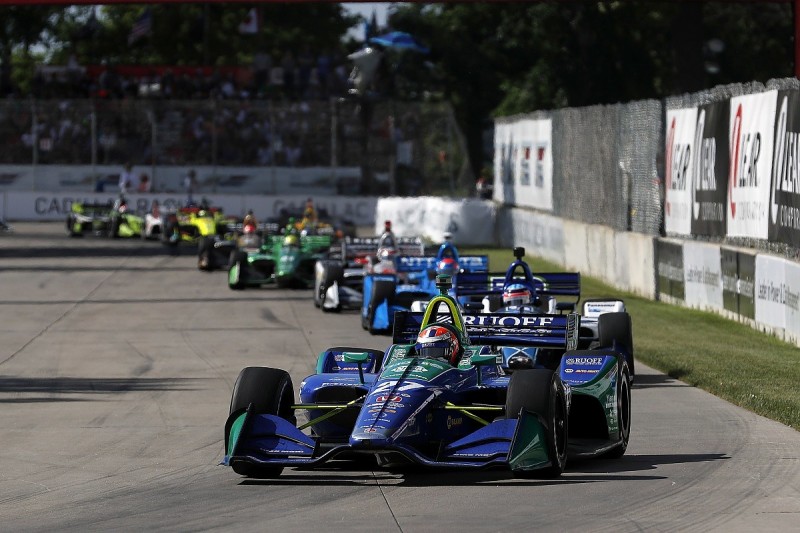 This allowed Power to inherit second and reclaim the championship lead. The Indianapolis 500 winner was the only Chevrolet-powered car in the top six.

Ed Jones equalled his best finish of the season in third, holding off his Chip Ganassi Racing team-mate Scott Dixon in the closing stages. Until a slow final pitstop, Jones had controlled a comfortable margin over Dixon.

Race one winner Dixon had battled with Sebastien Bourdais at mid-distance of the 70 lap race. However, the Dale Coyne Racing-prepared car spun out of contention with a left-rear tow link failure. He finished three laps down.

Last year's double-winner Graham Rahal made up for his race one DNF by finishing fifth, while Wickens finished sixth, unable to match Hunter-Reay's pace on the same strategy.

Tony Kanaan rose from 22nd on the grid to finish seventh for AJ Foyt Racing, after an opening lap pitstop when a caution was called for a spin by Spencer Pigot.

The race was delayed by nearly 40 minutes when the safety car spun into the wall at Turn 2 on the formation lap.

Both the driver, GM executive Mark Reuss, and IndyCar official Mike Sandy, who was the passenger, were unscathed.