Colton Herta said that his car did "exactly what you want it to do" en route to a dominant IndyCar victory at St. Petersburg, his fourth victory in the series.

Andretti Autosport's Herta led the second round of the season for 97 of the 100 laps, holding off a strong run from Team Penske-Chevrolet’s Josef Newgarden.

In the first stint, in which he was using Firestone’s softer alternate compound of tyres, Herta pulled a 2.5-second gap over Meyer Shank Racing's Jack Harvey - and then maintained it while saving fuel.

He was then able to respond when Newgarden took over second place from Harvey as the British driver's tyres faded.

When Herta and Newgarden were running scrubbed primary tyres during the second stint, Herta found even more performance, and by the time they both made their second and last pitstops at the end of Lap 68, Herta had pulled an 11s margin over the Penske driver.

“You know, I think you have a few times, maybe once or twice a year, where you have a car that dominant, where no matter what you're doing, it just does exactly what you want it to do," said Herta.

"You could be saving as much fuel as you want or going as hard as you want and it just produces the killer lap times.

“We had one of those days, and it was awesome.”

Herta added that he was sure of his car being able to perform following both qualifying – where he took pole by a quarter of a second – and in the morning warm-up session.

He was then able to save fuel while setting competitive lap times out in front, managing to keep enough in reserve to ensure that he could start to up the ante in the final 25 laps of the race to stay ahead of Newgarden. 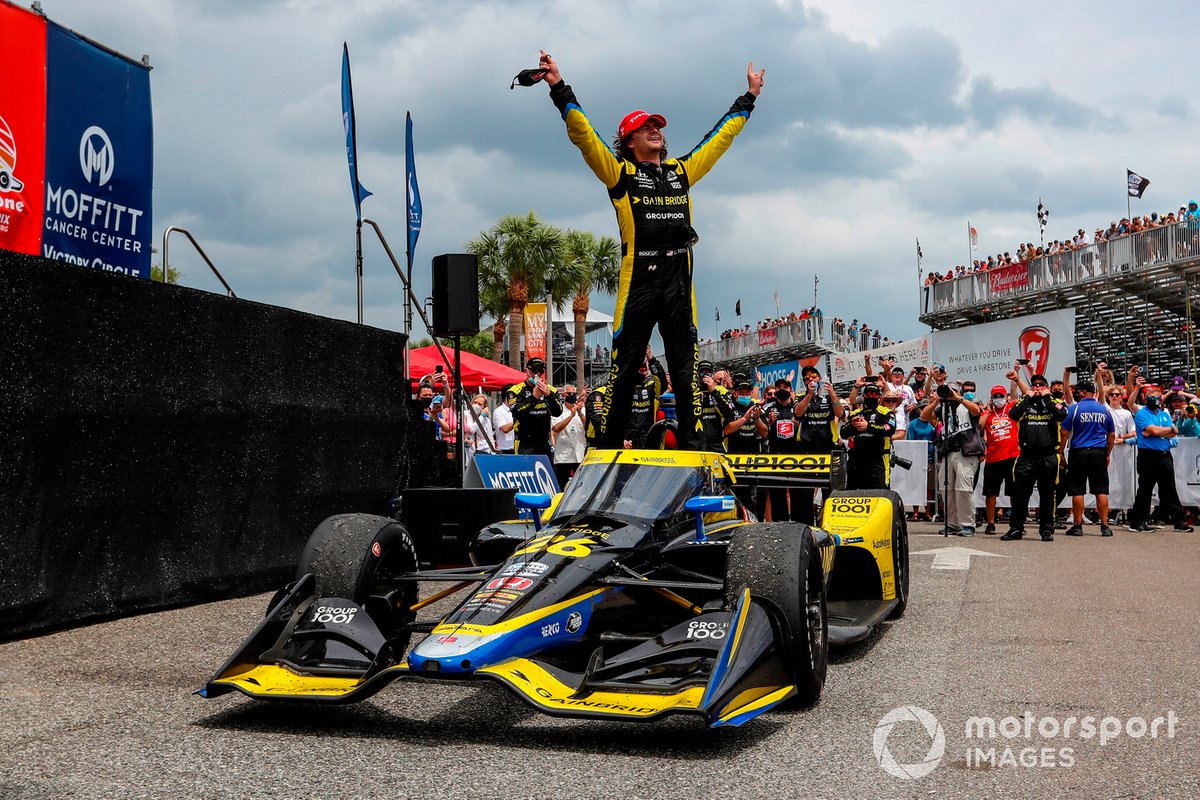 "We were actually saving fuel quite big and once we got 25 [laps] to go, we didn't have to hit a [fuel mileage] number at all because we saved enough fuel. Obviously yellows [full course cautions] helped.

“I don't want to say we were cruising but we just got that momentum going to where I knew I was lifting every lap to save fuel and I knew exactly how hard to hit the brake pedal.

"So it wasn't really coming easy, but obviously it's easier when you have that good of a car, and when it's able to save fuel and go that fast it's amazing. "

After the two restarts in the final part of the race, Newgarden was able to use his softer red tyres to stay threateningly close to the tail of Herta’s #26 car, which was now running on fresh black tyres - with the softer compound usually coming up to temperature faster.

But Herta says that he felt that the opposite was true for his car, and that his harder tyres firing up quickly helped him keep Newgarden at bay.

“I found something early on that I thought the red tyres might have been a little bit worse for restarts,” he said.

“I think [the two compounds] were more equal than we have seen in the past because on the first restart [during the first stint] I was on reds, he was on blacks, and he was able to stay really close.

"And on the restarts when I was on blacks, I felt the tires come up to temp really quick with the blacks rather than the reds.”

“Obviously we saw Josef was really fast on the red tires early on, and then we kind of saw that crossover point where I was able to start pulling out some good laps and his tires were starting to fall off.”