Josef Newgarden held off Pato O’Ward to take victory in an attritional IndyCar race at Gateway, as the Mexican driver took the drivers’ standings lead from Alex Palou.

Pouncing on misfortune for long-time leader Colton Herta, who suffered a mechanical issue while leading with relative comfort, Newgarden assumed the lead of the race.

The Tennessee native had previously taken the lead during the pit phase amid the third caution period, produced by Ed Carpenter’s shunt, after leapfrogging Penske team-mate Will Power and Herta out of the pitlane.

But Herta put in a rapid mid-race charge to shuffle up to the lead, clearing Josef Newgarden and Alex Rossi following the middle pitstop phase.

The Andretti driver then began to cement his advantage over the rest of the field, expecting to be able to go longer than Newgarden thanks to his superior fuel mileage.

But a driveshaft failure forced Herta in early, and the issue was evident when his right wheel was unable to deliver traction out of his pitbox, ending his race.

Newgarden was then able to pick up the pieces, and a looming challenge from Rossi for the lead was abruptly ended when the 2016 Indianapolis 500 winner hit the wall with 60 laps to go, having caught the marbles off-line.

After that final caution period, Newgarden had to spend the remaining 50 laps of green flag running holding off O’Ward, which he duly did so after peeling the Arrow McLaren SP driver away from the rest of the pack.

O’Ward’s second-place finish guarantees him the lead of the drivers’ standings with three rounds remaining, as Palou was taken out along with Chip Ganassi Racing team-mate Scott Dixon by Rinus VeeKay. 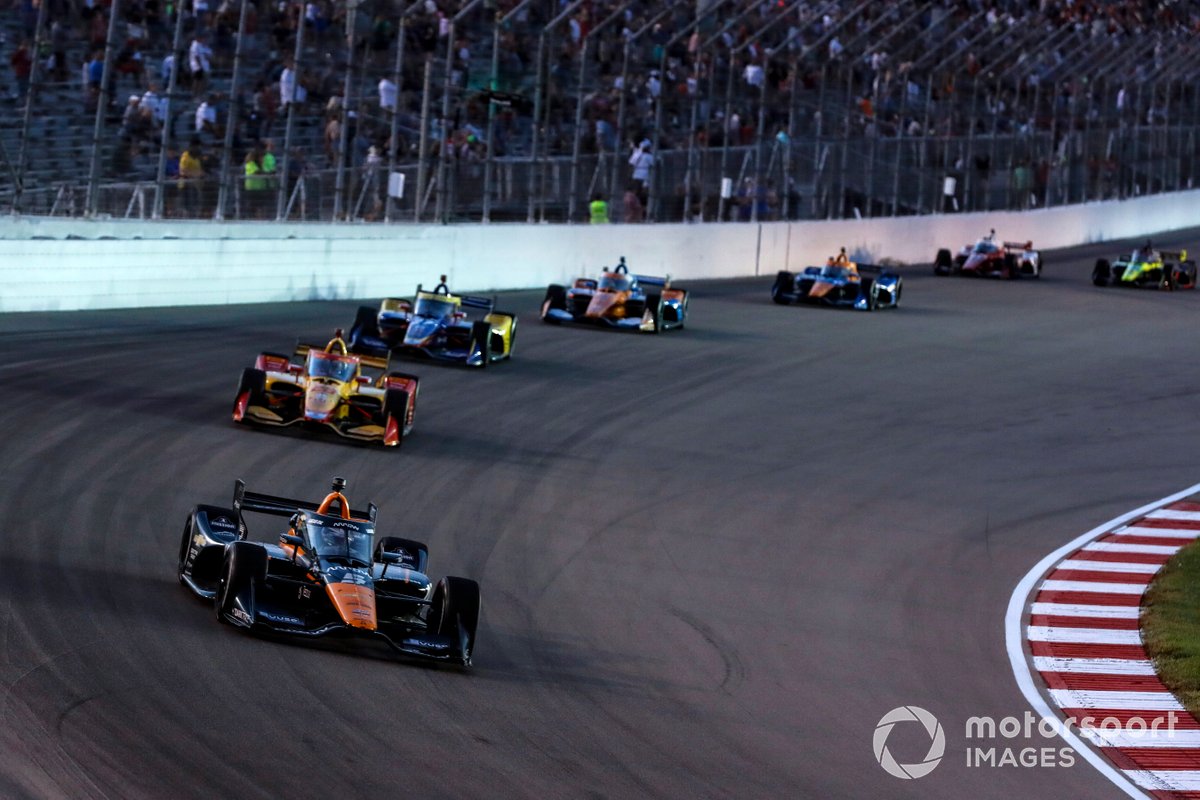 Immediately after the restart following the fourth caution period, VeeKay clipped the rear of Palou and sent the Spanish racer into Dixon’s car, rendering Palou’s machine too damaged to continue.

Polesitter Power collected a strong third-place finish a week after his first win of the year, as Scott McLaughlin continued to showcase his growing potential on oval courses with fourth place – making it three Penske runners in the top four.

Sebastien Bourdais ran off-strategy for the majority of the race and was rewarded for his and the AJ Foyt team’s bravery with the opportunity to pit under the final caution, after which he claimed fifth at the line.

Takuma Sato was sixth having run to a similar strategy as Bourdais, while Ryan Hunter-Reay was 5.8s off the Japanese driver in seventh.

Simon Pagenaud overcame early contact with team-mate Newgarden to finish eighth; Pagenaud had been clipped by the eventual race winner on the Lap 16 restart, losing a chunk of his front wing and leaving him having to recover from the back of the field.

He finished ahead of Marcus Ericsson, as Jack Harvey completed the top 10 – in a race where only 13 cars crossed the finish line on the lead lap.

Romain Grosjean proved to be a livewire in his first oval race, struggling with pace in the initial stages before a surge at the start of the race’s middle portion brought him into the top 10.

But Grosjean's green-flag pitstop shortly after left him struggling for grip, and a few excursions onto the increasingly dirty high lines on the banking stymied his progress. An unfortunately timed pitstop ahead of the final caution left Grosjean a lap down.

Graham Rahal and Ed Jones’ crash brought out the first caution period on Lap 3, in which Rahal attempted to pass around the outside as Jones was slightly off-line at the apex.