Scott Dixon survived a brutal IndyCar finale at Fontana to secure his third IndyCar championship, while Will Power claimed "the most satisfying win" of his career

The intensity of the race was reflected in the numbers: just eight cars running at the end, only five of which were on the lead lap, and 28 lead changes shared between 11 cars.

It was the kind of evening where Penske could make a mistake as catastrophic as calling Helio Castroneves into the pits when the pitlane was closed, forcing him to serve a drive-through penalty with less than 40 laps to go, and still get him back on the track with a scrap of hope of winning the title.

While he dodged a bullet on that occasion, Castroneves' ability to influence the destination of the title was dealt a more serious blow a short time later when he was forced to pit with a broken front wing, putting him a lap down.

From that point his chances of winning were dependent upon some misfortune striking Dixon, and in the latter stages, that was a real possibility.

One of the themes of the race was the massive amount of debris that was being sucked into the cars' radiators, with several of the raft of retirements being linked to cooling problems.

During the final stint, the readings on Dixon's car began to climb, forcing him to make a couple of extra stops late in the race to have his ducts cleaned out.

His cause was helped a couple of times by fortuitously-timed yellows that allowed his car to be serviced with a minimal loss of time, and he dragged it across the line in fifth to give himself a final buffer of 27 points over Castroneves.

"It was a crazy day," Dixon said. "We had to work on a bit of strategy, we had to work on the car a lot, and then we had an issue with some overheating problems towards the end.

"I still can't believe we've won the championship. It's fantastic."

Up front, Power's race was more straightforward. The Penske driver had one of the strongest cars on the track all night, and led 103 of the 250 laps to eventually deny last year's race-winner Ed Carpenter.

"That is the most satisfying thing I have ever done," said Power, whose claim to last year's championship was dashed by a crash at this track.

"And I wanted to do it so badly all year. In the early ovals, I just was kind of conservative because I just wanted to finish every lap. This time, I was going for it."

Tony Kanaan crossed the line behind Carpenter for third, with James Hinchcliffe finishing fourth ahead of Dixon. 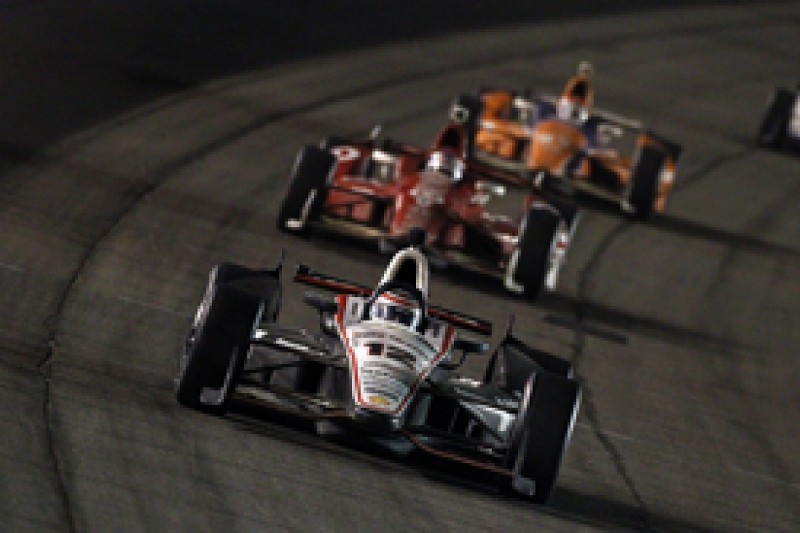 While several cars were eliminated by heat-related problems, many more retirements were the consequence of accidents.

Pippa Mann crashed early while trying to avoid Sebastian Saavedra, who was already having an accident of his own.

But the most serious incident came later when Justin Wilson caught a seam and spun in the middle of the track. He was T-boned by Tristan Vautier, and the resultant combination of smoke and debris accounted for several other cars.

All drivers escaped injury aside from Wilson himself, who was taken to a nearby hospital where initial scans revealed a small fracture to his pelvis.