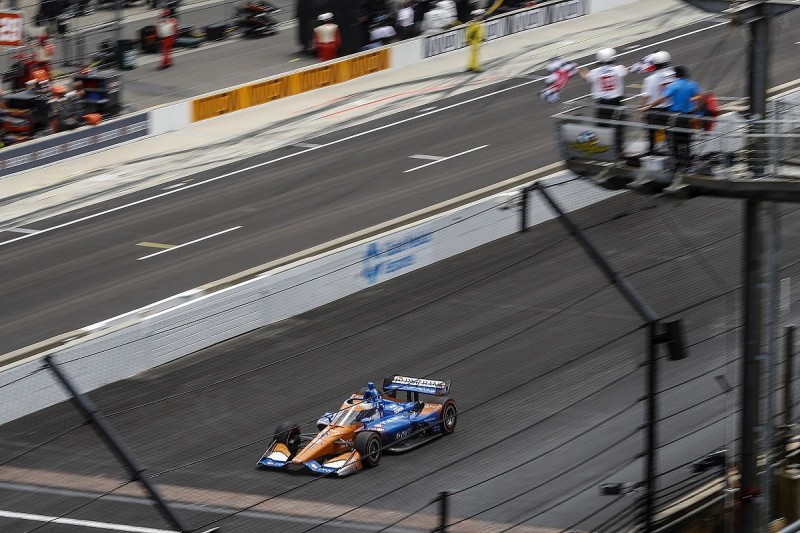 The five-time IndyCar Series champion dominated the second half of Saturday's race after making his second pitstop just before the yellows came out for an accident to Oliver Askew's Arrow McLaren SP-Chevrolet.

That - and some modifications to his car's handling at the pitstop - allowed Dixon on alternate tyres to hunt down the two-stopping RLL-Honda of Graham Rahal who at that stage was leading with Firestone's primary rubber.

After sweeping past Rahal shortly after the caution period, Dixon pulled a lead of nearly 10s before making his final stop and extended his advantage thereafter to win by 20s.

"I think we kind of got a little bit lucky, but I think it also played into our strategy," said Dixon, who had finished runner-up for the past three seasons on the Indianapolis road course.

"We started pretty aggressive, all three Ganassi cars on the black [primary] tyre, which was definitely pretty tough.

"We were able to pick up one spot on the start, and that kind of set us into a pretty aggressive three-stopper, and that's when our window was to pit. Then three, four laps later the yellow came out and we were the ones that cycled towards the front.

"Definitely a little bit of luck there, but honestly it was just the strategy we were on, and hung out the leaders for sure. But we had the pace." 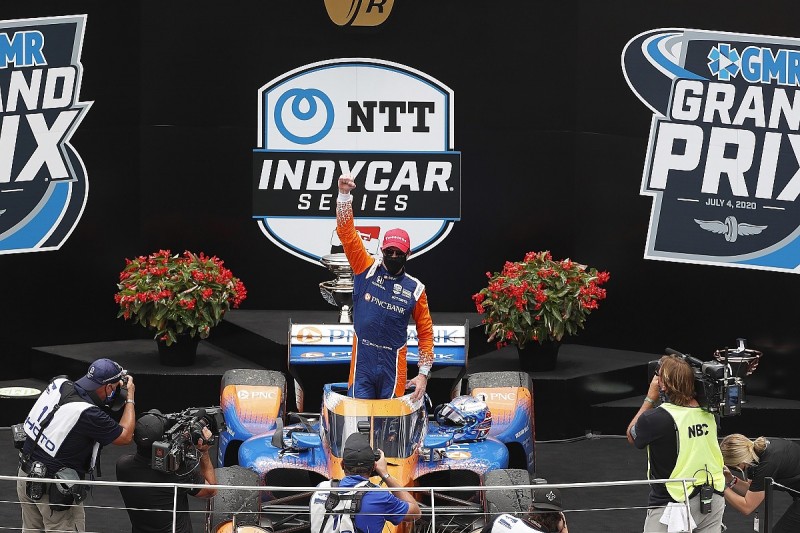 Rahal meanwhile was left to rue the full-course caution having saved enough fuel beforehand to make a two-stop strategy feasible, but lost any advantage as the field bunched up behind him.

"I thought the strategy was honestly working perfect," he said. "Coming out of the pits after the first stop and still being right with [Will] Power and [Jack] Harvey and all the good guys, the guys I was racing at that time, all I kept thinking was that when the pits cycled through for the last time, we'd have about a 25- or 30-second lead.

"But obviously the yellow came out and kind of nullified our strategy because then everybody just got to pit under yellow and then there was just one more [stop] to go.

He added: "That's life. Strategy has burnt me before, and it's helped us a lot before. We've won races because of it.

"And Dixie was very fast today. Would we have won? We certainly would have had more of a buffer, but he was definitely quick. When he caught up to me, it was almost impossible on the blacks, plus fuel saving, to keep him behind me."

Dixon praised the Ganassi team for the off-season staffing boost and tech shake-up that meant his former race engineer Chris Simmons moved into a technical director role while Michael Cannon arrived from Dale Coyne Racing to run the #9 car.

"Kudos to Cannon and everybody on the team," said Dixon, who also won the opening round of the championship in Texas.

"It's kind of a new team for us, a lot of new people, so obviously we've got a lot more depth this year, too, because we kept most of the other people, as well, they just kind of moved around to different areas and helped for support and management.

"It's nice to have a fresh set of eyes not just from Cannon but also the Ford GT program, especially in endurance, which I think was a big help. Brad Goldberg [now working on Marcus Ericsson's car] has been massive in just thinking about different ways of looking at dampers, car set-ups and oval stuff. There's definitely areas over the last few years where we've kind of let slip and maybe not been as dominant as we should be as a team and kind of on the back foot a lot.

"I like Cannon. He's a great person. He's a real racer. I just like his approach. He's pretty laid-back but methodical and doesn't just throw a bunch of things at it. He really thinks about it.

"It's been a fun start to the year so far, and if we can keep this rolling that's obviously the goal, but we'll see how it goes."

How Ganassi's pursuit of perfection is paying off