The Detroit Grand Prix traditionally has a different qualifying system than the other road and street courses, but this year it has been brought much closer in line with the regular system, with the 25 cars divided into groups of 12 and 13 in qualifying, with the top six from each going into a top 12 fight for pole. The difference to regular qualifying for road and street circuits was that there was no final session shootout for pole position between the top six drivers.

As the drivers discovered yesterday, the softer red-walled Firestone tyre compounds were taking a long time to get up to operating temperature around the 2.35-mile course, meaning many drivers cut short their ‘banker’ laps on the primary compound to work on the reds for longer.

That didn’t explain Andretti Autosport’s two-time Detroit polesitter Rossi laying down a startling 1m15.8507s in Group 1 to beat the rest of his rivals field – led by Dale Coyne Racing with RWR’s Grosjean – by an incredible 0.82s. But it did explain why Will Power only scraped through with his second flyer on reds.

The biggest surprise was Chip Ganassi Racing’s championship leader Alex Palou finishing 11th in the first group of qualifying. His misery was multiplied, knowing that he was being penalised a further six places for his early engine change at the Indy 500.

Ganassi’s Jimmie Johnson made a notable stride overnight, knocking more than two seconds off his deficit to the fastest in his session, to finish up 3.2s down.

With Newgarden, Scott Dixon and O’Ward heading straight out on softer tyres in the top 12 shootout, the times tumbled, with Grosjean, O’Ward, Rossi and Jones all taking turns at the top, until the Arrow McLaren SP driver nailed his second pole of the season with a scintillating 1m15.5776s. 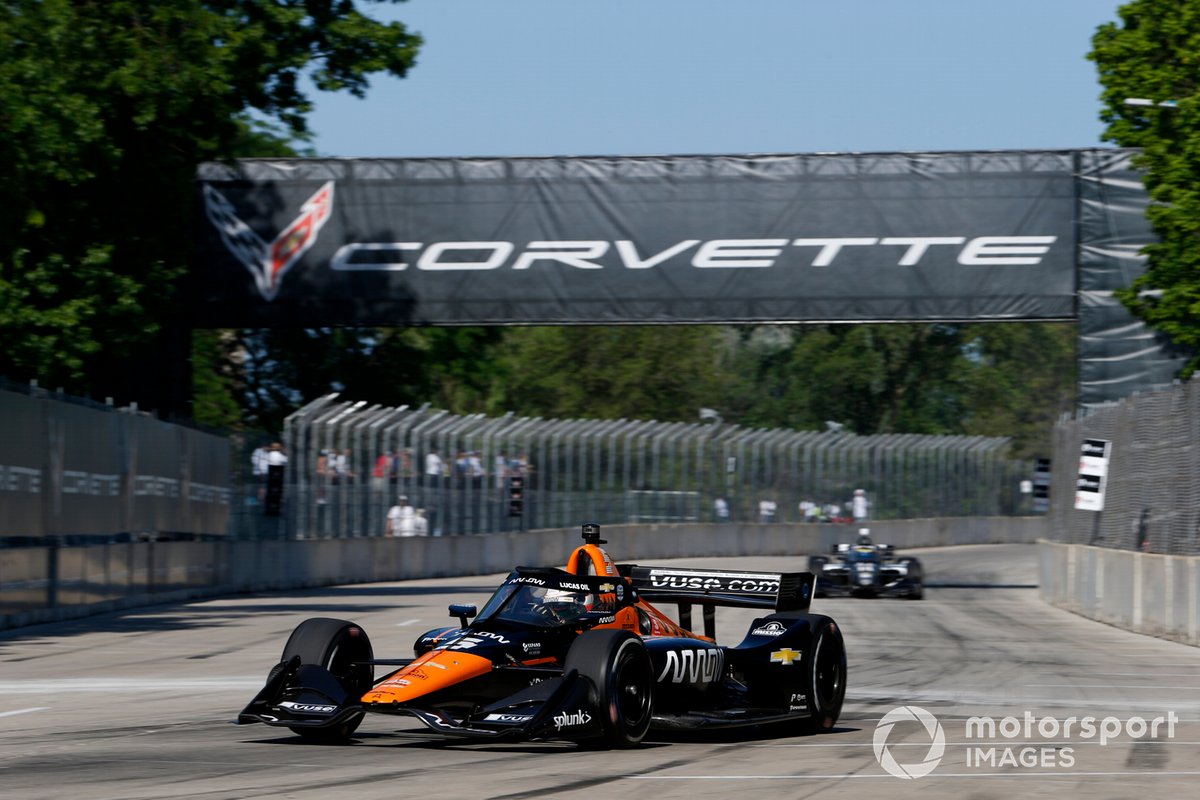 That was a mere 0.08s faster than Rossi, while Grosjean was by far the quickest rookie in third place for Dale Coyne Racing, ahead of Jones.

Josef Newgarden was top Penske driver in fifth, although Power was tracking to be 0.18s faster than polesitter O’Ward, but clipped a wall with his left-rear wheel and at the next corner, a right-hander, the rears locked and he grazed a tyre wall, ending his bid with seventh place, behind Andretti's Colton Herta.

The first race of the Detroit double-header begins at 2pm local time (7pm BST) on Saturday.