Josef Newgarden brought some joy to Team Penske at Detroit with pole position for the second IndyCar race of the weekend, as Santino Ferrucci crashed in the final part of qualifying.

With no Fast Six pole position shootout at the Detroit double-header, the all-important top 12 session got underway with some drivers on used red-walled tyres to do their sighting laps and some on primaries.

Ferrucci put his Rahal Letterman Lanigan on top early on with a 1m15.5s lap on primaries, but Alex Palou snipped a tenth off that – also on primaries – having let his tyres cool for a lap to deliver a 1m15.0244s.

However, Newgarden laid down a 1m14.1094s on red-walled tyres that was 0.320s faster than Colton Herta’s best time that was also set on the softer tyres.

A further three-tenths down was Dixon who slotted in ahead of Rinus VeeKay, Palou, and Romain Grosjean.

But the final qualifying session was halted when Ferrucci caused a red flag after shunting hard into the concrete wall at the final turn of his final flyer, ripping off his front-left corner, and so lost his two best times and will start 12th.

That red flag also meant some drivers completed their final flyers under red, so those times were deleted, to see VeeKay and Palou moved up to third and fourth respectively, while Grosjean and Dixon will start on the third row.

Alexander Rossi was a disappointing seventh, but ahead of Conor Daly, Graham Rahal, Simon Pagenaud and Ed Jones.

Earlier in qualifying in the first group fighting to reach the top 12, Scott McLaughlin, Takuma Sato, Rahal and Oliver Askew – substituting for the injured Felix Rosenqvist in the Arrow McLaren SP – went straight out on the softer compounds, as the drivers had already discovered they took longer than usual to come up to temperature.

Herta set the best time of the segment, with a 1m16.080s ahead of Rahal, Dixon and Newgarden, with Ferrucci and Jones also nipping through the first segment to make the top-12 shootout.

It meant the surprise packages who didn’t make it through were two-time Detroit winner Sebastien Bourdais for AJ Foyt, Ryan Hunter-Reay for Andretti and one of the stars of yesterday’s race Takuma Sato.

Less surprising was that Askew was last, having had no preparation as a last-minute sub. The 2019 Indy Lights champion was wearing Juan Pablo Montoya’s firesuit and Alex Palou’s race boots. 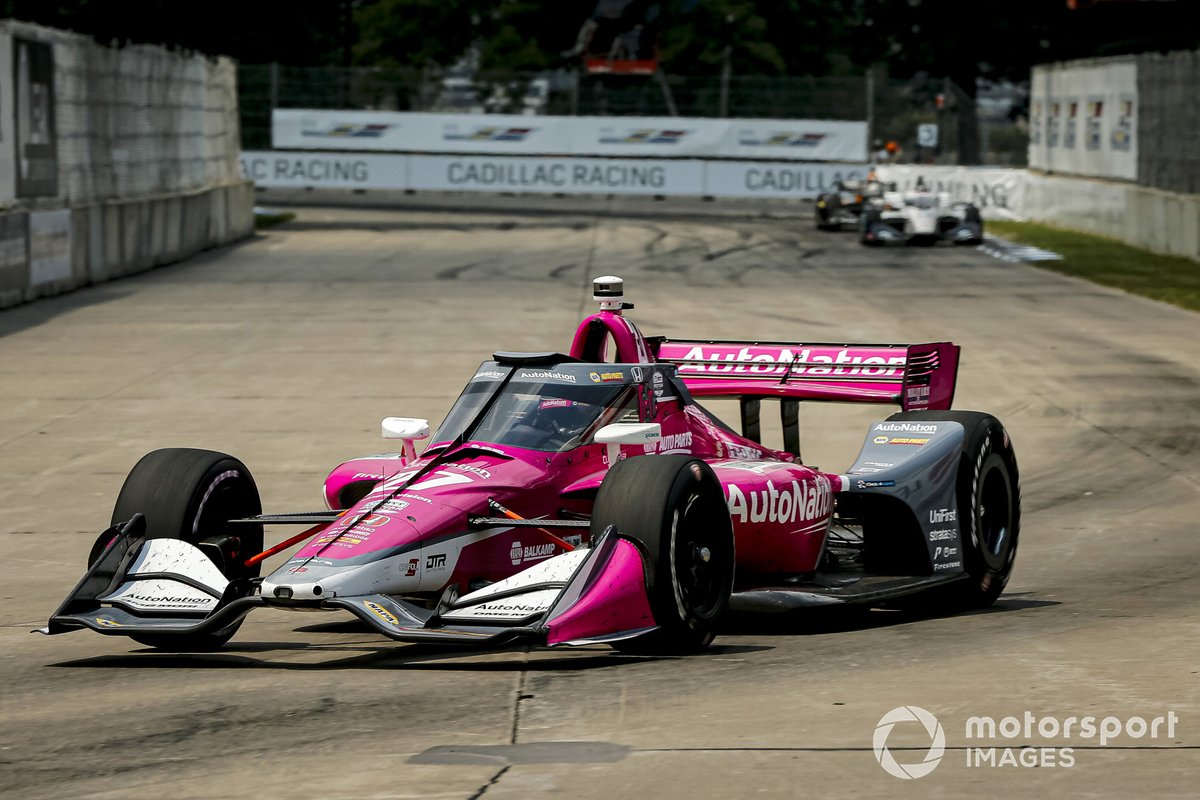 His team-mate Daly also made it through to Q2 after an anonymous Saturday, as did Grosjean, Pagenaud and Palou, with the Spanish driver having started Saturday’s race from the back due to an early engine change.

Pato O’Ward didn’t make it through because he struck the wall with his left-rear, while Will Power, who should have won yesterday, didn’t graduate because he thought he had time for one more flyer, only to receive the chequered flag, with opening race winner Marcus Ericsson also failing to advance.