Zachary Claman De Melo will compete in this month's Indianapolis 500 after Fittipaldi was injured in a qualifying crash in the World Endurance season opener at Spa, suffering a compound fracture of his left leg and a broken right ankle.

Fittipaldi had been slated to share the #19 seat with De Melo, competing in seven out of the 19 races.

He made his debut at Phoenix, but his injury has prevented him contesting both Indianapolis races and will likely rule him out of the Texas oval round before a Mid-Ohio return at the end of July.

With De Melo expected to race at Texas, team owner Dale Coyne said he is likely to revise the car sharing plan.

"Initially you think a broken bone, [he'll have] six to eight weeks [out]," said Coyne.

"The right ankle is probably going to be a little bit longer for him than his left leg. He's putting weight on his left leg already.

"Realistically, his original schedule was to do the [Indy] GP, this race, Texas, then not come back till Mid-Ohio.

"I think the plan is we've moved some races around with Zach, so he'll do this race, probably Texas.

"But that frees the whole rest of the season up so he [Fittipaldi] can come back at Mid-Ohio and finish up the season."

DCR had been looking for drivers with funding to replace Fittipaldi, having expressed concerns about De Melo's lack of experience for the Indy 500 and the Texas oval race. Coyne added a third driver could still appear in place of De Melo.

"There's a possibility of that," he said. "We're still working through the whole rest of the season." 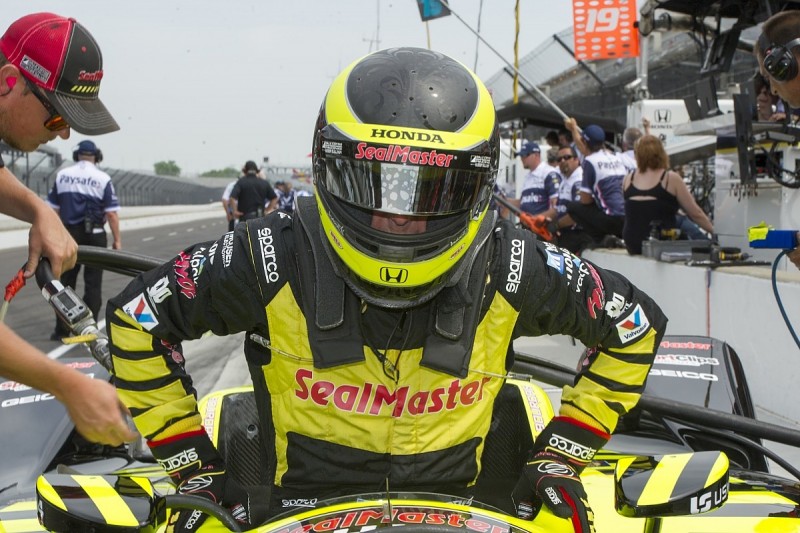 Fittipaldi is currently undergoing his recovery at Indianapolis with IndyCar's leading medical professionals.

He said he has lent on Sebastien Bourdais after the four-time CART champion suffered serious injuries in qualifying for the Indy 500 last year.

"Sebastien came to my motorhome," he said. "I was speaking to him for an hour or so.

"He was telling me all about his recovery, his rehab, how he got back in around eight to 10 weeks, something like that. It's obviously very inspiring.

"Even with my cousin, Christian Fittipaldi, when he got injured [in a 1997 CART race at Surfer's Paradise], he came back [and] had one of his best races. He had the same injury that I had on my left leg.

"I'm getting a lot of input from a lot of friends and family, which is always good. It's putting me on the right path to getting back."

Fittipaldi added that his grandfather and two-time Indy 500 winner Emerson Fittipaldi has been helping him "a lot", as is uncle and three-time CART race winner Max Papis, who put him in touch with IndyCar's medical team.