Andretti, who had finished the first day of qualifying on Saturday fastest, was the last driver in the Fast Nine to make his sole four-lap run around the 2.5-mile oval, needing to beat Dixon's 231.051mph average to take pole for next Sunday's race.

The #98 Honda powered machine matched Dixon, with the first two laps being in the 231mph range, but Dixon's third lap being slightly faster than Andretti's effort.

On the final lap of Andretti's run, he pulled out 0.195mph on Dixon to snatch pole by just 0.017mph and give the Andretti family its first since Marco's grandfather, 1969 winner Mario, took his third pole in 1987.

Dixon, whose #9 Chip Ganassi machine was significantly more trimmed out than his rivals, was the fifth driver to run and the only other driver besides Andretti to break the 231mph average over the four laps.

They will be joined on the outside of the front-row by 2017 race winner Takuma Sato - whose consistent run brought the Rahal Letterman Lanningan Racing ace an average of 230.725mph.

Rinus Veekay was the only Chevrolet driver to make it through to the Fast Nine and the rookie will start the 104th running of the race in fourth place - just narrowly failing to pip Sato's average. 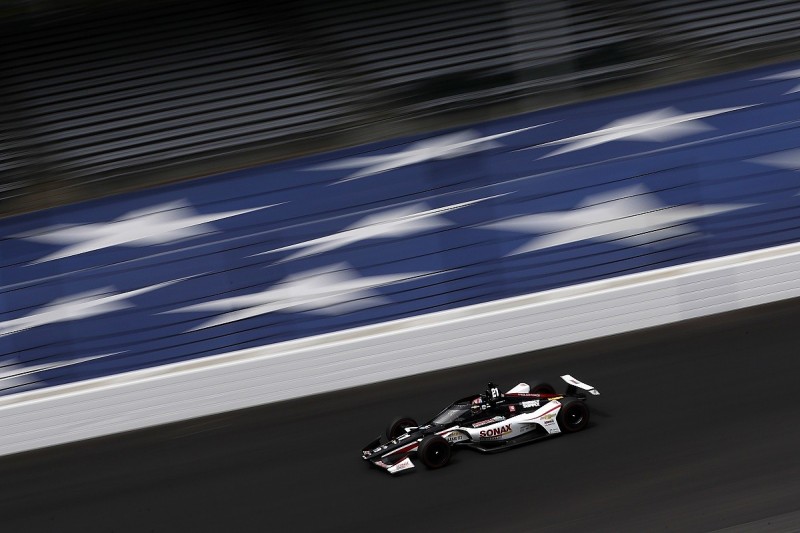 The Ed Carpenter Racing driver clocked 230.704mph across his run - two-tenths of a mile an hour slower than former Formula 1 driver Sato.

The other Andretti Autosport drivers all struggled to match Andretti's blistering pace - Ryan Hunter-Reay placing the best of the other three drivers.

The 2014 winner said he, James Hinchcliffe and Alexander Rossi all went "too skimpy" on downforce and were "sliding all over the place" throughout their runs, although the 2012 series champion did salvage a place in the middle of the second row, with 2016 polesitter Hinchcliffe in sixth.

Ex-Formula 2 driver Alex Palou set the single fastest lap across the Fast Nine session with 231.901mph on his first lap, but struggled to maintain that pace throughout the remainder of his run to see the Dale Coyne Racing driver dropping off to claim seventh place.

Graham Rahal was unable to match the consistency of team-mate Sato and qualified in eighth place, ahead of 2016 winner Rossi, who could only put in a single lap above the 230mph barrier, handing him a berth on the outside of the third row.