Scott Dixon clinched his sixth IndyCar championship in a thrilling final race of the season at St Petersburg, which was won by Dixon's main title rival Josef Newgarden.

The 2019 series champion was the only driver who could prevent Dixon from claiming his sixth title, but he needed to win the race and for Dixon to finish in 10th place or lower.

Newgarden's title hopes weren't helped when he qualified down in eighth position on the grid in Saturday's qualifying session - albeit three places ahead of points leader Dixon.

Newgarden's Team Penske team-mate Will Power led away from pole position at the start of the race, but he dropped down to fourth place with downshift woes just a few laps later.

This promoted Andretti Autosport star Alexander Rossi into the race lead, with his team-mates Colton Herta and James Hinchcliffe rounding out the top three.

Rossi weathered three successive caution periods at the halfway stage of the 100-lap race and looked set to record his first race victory of the season before he spun and crashed into the barriers on the exit of the Turn 3 right-hander with 30 laps to go.

Herta had dropped to fourth place prior to Rossi's incident after he went down the escape road at Turn 4, but he was able to leapfrog Hinchcliffe and title challenger Newgarden to ensure he took the lead when Rossi crashed.

When the race restarted following Rossi's crash, Hinchcliffe - making his third start in place of Zach Veach in the #26 machine - challenged his team-mate Herta for the race lead at Turn 1.

Herta fended off Hinchcliffe's attack and the latter ended up spinning all on his own just a few moments later under another safety car. When Hinchcliffe re-joined the track, he collided with Meyer Shank Racing's Jack Harvey and broke his front wing.

The chaos allowed Newgarden into third place and his patience paid off at the next safety car restart - with spots of rain beginning to fall - as with Herta and rookie Alex Palou squabbling for the race lead into Turn 1, Newgarden swooped around the outside of both of them into Turn 2 with 20 laps to go. 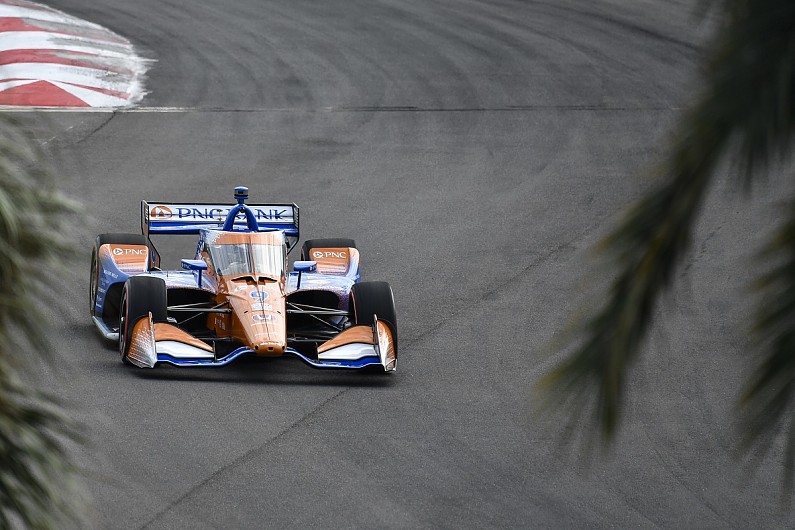 The safety car was required once again when Arrow McLaren SP's Oliver Askew ended up in the barriers at the Turn 10 left-hander following a failed overtake on Indianapolis 500 champion Takuma Sato.

In bizarre scenes, the safety car ran out of fuel and returned to the pits, leaving Newgarden to control the field for the final race restart.

Askew's team-mate Pato O'Ward, who was going in search of his maiden IndyCar race win, passed Dixon and his 2018 Indy Lights title rival Herta to move into second place behind Newgarden.

Newgarden then fended off pressure from O'Ward and was able to build a small buffer at the front of the field, while another mistake for Herta at T4 dropped him from third place to outside the top 10.

Newgarden claimed his fourth race win of the year but it wasn't enough to prevent Dixon claiming his sixth title - placing the 40-year-old Kiwi within one title of the all-time title record holder AJ Foyt.

O'Ward took second place in the race to match his best-ever result in the championship, while Dixon completed his title-winning season with his seventh podium finish of the year in third.

Sebastian Bourdais achieved AJ Foyt Racing's best result of the season in fourth-place, one place ahead of the highest-placed Andretti entry of Ryan Hunter-Reay - despite Andretti running 1-2-3 at the mid-point of the race.