Takuma Sato was accused by Alexander Rossi of moving down into him, in an incident which also collected Ryan Hunter-Reay, James Hinchcliffe and Felix Rosenqvist, the latter sent airborne and his car landed on top of the safer barrier.

Rosenqvist was later released from hospital while the other four drivers were cleared at the circuit's medical centre.

Sato explained that he "thought it was all clear" but later responded to Rossi on Twitter saying that he hadn't moved down into him.

Robert Wickens, whose career has been halted by injuries incurred in a lap one shunt at Pocono last year, said on Twitter afterwards that IndyCar has a "toxic relationship" with the 2.5-mile tri-oval, while fans took to social media to question its place on the calendar.

How many times do we have to go through the same situation before we can all accept that an IndyCar should not race at Pocono. It's just a toxic relationship and maybe it's time to consider a divorce. I'm very relieved (to my knowledge) that everyone is okay from that scary crash

However, runner-up Scott Dixon, race winner Will Power and championship contender Simon Pagenaud defended the track's reputation and hope it remains on the schedule.

"Honestly, I feel bad for Pocono," said Dixon who won the 2013 IndyCar race at Pocono, after its 24-year-hiatus.

"The group of people here that work, they work extremely hard.

"I felt the crowd today at the start of the race was fantastic.

"It was gaining some really good momentum.

"Hopefully it does continue.

"Some mistakes that have happened on track... honestly they could happen anywhere.

"If you look at Justin [Wilson, who was killed by flying debris at Pocono in 2015] or Robbie [Wickens], those can happen anywhere.

"I feel bad that it gets a bit of a bad taste in that scenario.

"I think the drivers in a lot of situations can do a better job to help that situation." 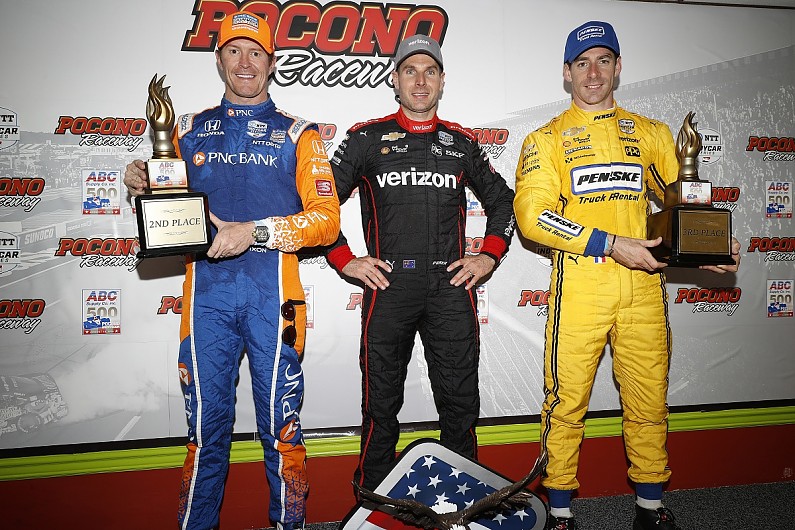 Power, who has won three of the last four IndyCar races at Pocono, said: "I agree, it's a great oval for us.

"Obviously some unfortunate accidents [have happened] here, but like Scott said, they could happen anywhere.

"[Pocono has] kind of got a bad rap for that.

"The crowd is up 15% every year we come back. It's getting better. Like Scott said, the crowd was great today."

Pagenaud, who dominated the first half of the race, added: "Personally, I love superspeedways.

"Obviously when you're traveling at such high speed, you know a crash is going to be a big crash.

"I've been racing here since 2013 in the series. I've enjoyed it more and more every year."

Another driver to come out in support of the event was Rossi, despite being caught up in that first lap crash.

It was also a blow for Rossi's championship as he lost ground to his closest rival and points' leader Josef Newgarden with three IndyCar races remaining.

"Fingers crossed we can work something out and we're all back here next year," Rossi added.