The final hour and a half of the planned seven hours of running was scrubbed off, ensuring Chevrolet-powered Jones's eighth lap of 37, a 227.843mph effort set in the morning, remained fastest.

That lap was 1.5mph faster than the best set by 2017 Indy 500 winner Takuma Sato in the #30 Rahal Letterman Lanigan Racing-Honda, who beat Zach Veach's Andretti Autosport-Honda by 0.6mph.

Sage Karam was the busiest driver of the day in his Dreyer & Reinbold Racing-Chevrolet, turning 86 laps, and finished up just ahead of the continually impressive Juncos Racing-Chevy of Kyle Kaiser, whose car is still without sponsor logos (pictured below). 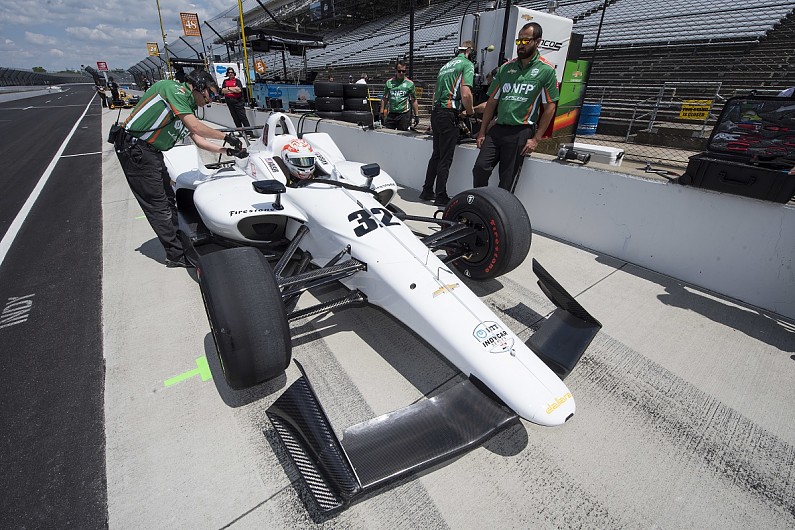 Ahead of the Fast Friday final practice day, when cars' turbos are tweaked up to 1.4-bar boost in preparation for qualifying runs on Saturday and Sunday, several drivers carried out low-drag qualifying simulations without the assist of a draft from other cars. IndyCar officially judges a car has a tow if it is within seven seconds of the car in front.

Carlin driver Patricio O'Ward crashed in the second hour of running and ended up with the 23rd-fastest lap, setting a best speed of 224.170mph.

After crashing on the second day of practice, two-time Formula 1 world champion Fernando Alonso did not complete a lap on Thursday as McLaren opted to repair his damaged car rather than build up a back-up.