The 18-year-old's victory relied on a stunning restart following a safety car called after James Hinchcliffe nudged the rear of Felix Rosenqvist at Turn 19 - where no track limits were enforced - and sent the Chip Ganassi Racing driver into the wall leading into the pitwall entry.

The timing ruined the race of long-time leader Will Power after he had led every lap from pole for 45 of the 60 laps.

At the point of Rosenqvist's crash, Power had not pitted for the final time.

When the pits reopened on lap 46, Power dived into change tyres but stalled upon leaving his pitbox and reported a suspected driveshaft failure that forced him into retirement.

His long-time pursuer Alexander Rossi and third-placed Scott Dixon, running a long middle stint on the harder black-walled tyres, were also forced into the pits and out of contention.

That promoted Herta into the race lead with just 10 laps remaining, having spent the majority of the race in a lonely third after starting fourth, ahead of Newgarden.

Despite Newgarden having a push-to-pass advantage of 127 seconds to Herta's 43, the Harding driver's superior restart gave him the platform to win as the Penske driver failed to muster a challenge.

The victory meant Herta replaced Graham Rahal as IndyCar's youngest race winner, who was 19 years old when he won at St Petersburg in 2008.

Newgarden was a surprise second place considering the fact he had failed to make the Fast Six in qualifying, beginning the race in seventh.

But Penske opted to pit Newgarden early in his first stint after just 10 laps and he ran aggressively with use of push-to-pass to climb to fourth, and then timed his last stop before Rosenqvist's crash.

Ryan Hunter-Reay was third for Andretti, having held off an aggressive Rahal Letterman Lanigan Racing driver in Graham Rahal through the opening series of corners on the restart. 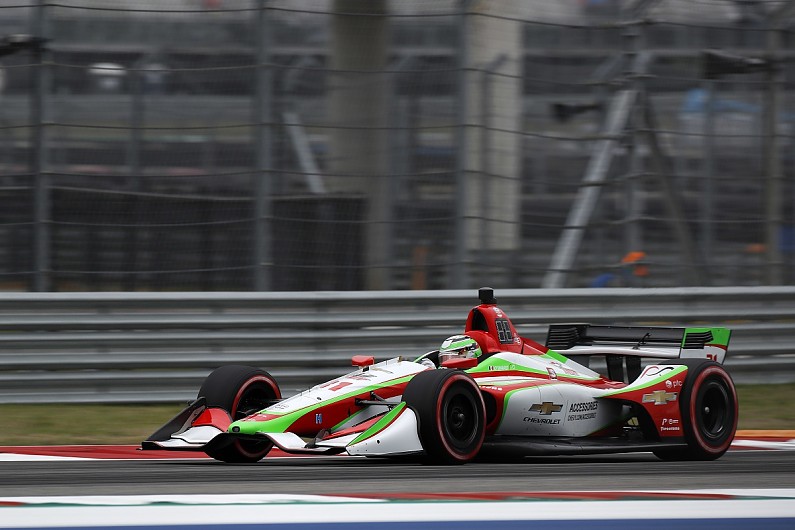 Patricio O'Ward, the driver who defeated Herta to win Indy Lights in 2018, was an impressive eighth for Carlin in his first IndyCar race since an 11th-hour deal gave him a seat after his Harding exit.

Marco Andretti was another driver helped by the late caution and the midfield incident, climbing from 20th on the grid to finish sixth.

Takuma Sato was seventh while ninth-placed Rossi and Harvey behind him Jack Harvey and Rossi rounding out the top 10.

Race-win contender Dixon recovering to 13th in the last 10 laps.

Arrow Schmidt Peterson Motorsports had looked a dark horse for victory after opting to stop both Hinchcliffe and team-mate Marcus Ericsson early in the race.

Ericsson climbed to the fringes of the top five midway through the race but ended up 15th ahead of his team-mate.

Rosenqvist endured a nightmare race as he spun and lost three places midway through as his Ganassi team struggled with tyre life at the end of the stints.

Simon Pagenaud was another to retire following late contact with Rossi that forced him into the pits inside the final 10 laps, while a messy race from Andretti's Zach Veach ended in retirement after a lap one off and a puncture following a clumsy failed move on Dixon.