The Swede had qualified well in second, but couldn't make the most of his front-row grid position for his first ever rolling start in Saturday's opening race, dropping down to sixth.

Kaiser started from pole, but a bold getaway from Zach Veach propelled him from third to first, ahead of Kaiser and a storming Serralles, who moved up from seventh.

Veach opened up a comfortable lead of 1.7 seconds, but on lap 17 an electrical fault vaulted the three-time Lights winner to the back.

That promoted Serralles to first, and he secured the win ahead of Scott Hargrove and Kyle Kaiser.

While Rosenqvist lost out in the first race, the two-time Macau Grand Prix winner proved he had learned from that when he won the second race with a controlled lights-to-flag victory.

An early yellow flag period thanks to a clumsy overtake attempt by Shelby Blackstock, and lapped traffic that failed to heed blue flags looked to challenge Rosenqvist's dominance, cutting his 3.4s lead down to 1.8s.

But the Belardi Auto Racing driver rebuilt that advantage, crossing the line 4.3s ahead of Kaiser and Veach.

With a third and a second, Kaiser sits second in the championship behind Serralles, with Rosenqvist third.

Racing with Andretti Autosport, Stoneman had a better day to finish sixth for race two. 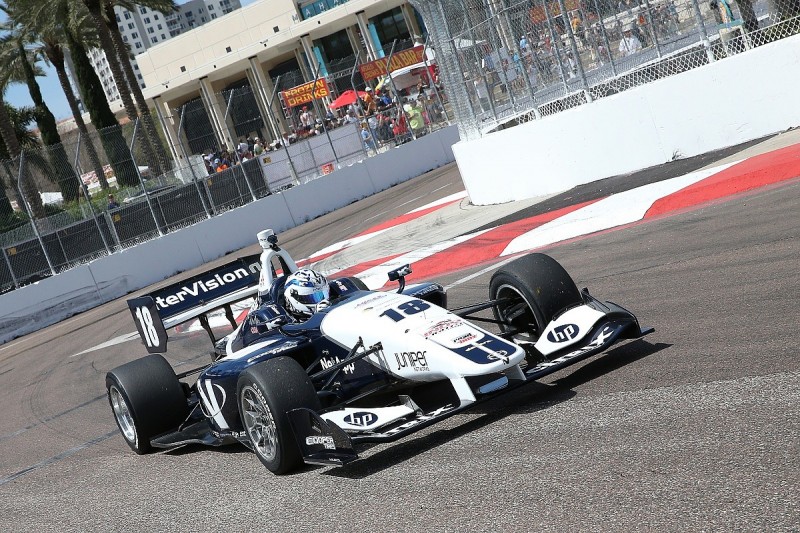