Factory Porsche driver Nick Tandy says he was lucky that his 963 LMDh car didn’t sustain “too much damage” in his qualifying crash for the Daytona 24 Hours.

Tandy appeared to be on course to grab provisional pole for the first competitive outing for Porsche Penske Motorsport's new hybrid prototype in Sunday's qualifying session.

But, after setting two fast sector times, Tandy locked up his left-front tyre and lost control of the rear at the Bus Stop chicane, spinning head-on into the tyrewall.

After causing a red flag, which cost him his two best times, Tandy was able to drag his damaged car back to the pits.

The shunt means the #6 will start the IMSA SportsCar Championship season-opener from the back of the GTP pack in ninth place.

“I have to say thank you to the team for giving me such an amazing car to drive,” said Tandy.

“I’ve never experienced the Porsche 963 in these conditions with that sort of speed and balance. And honestly, the car was just amazing.

“The lap time was looking very good. It doesn’t look like we’ve done too much damage luckily.

“It’s not the ideal situation going into a 24-hour race when parts are limited, but the positive is how the team has been operating this week and how fast the car is.” 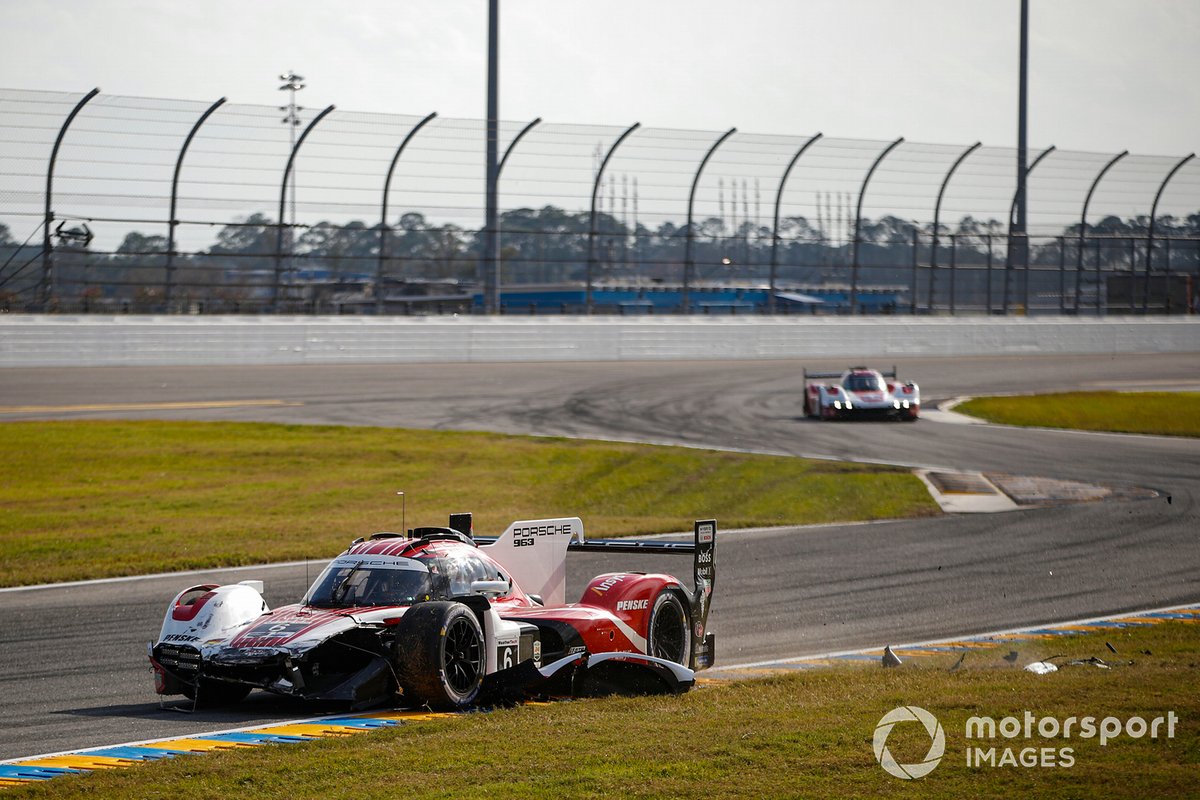 It was left to ex-F1 driver and two-time IMSA champion Felipe Nasr to deliver a front-row starting spot for PPM, as he missed out on pole to Meyer Shank Acura driver Tom Blomqvist by 0.083s.

“The first qualifying of the year in IMSA and it’s a front row for Porsche Penske Motorsport,” said Nasr, who will share his car with Matt Campbell and Michael Christensen next weekend.

“I am really happy with the lap we did. We made really good progress over the week understanding the car, the tires and the conditions out there.

“It would be nice to be on pole, but the bigger picture is next weekend. We unlocked some speed on the car, which was nice to see.”

Porsche Penske Motorsport managing director Jonathan Diuguid was encouraged that it was a “true” reflection of the car’s pace on the first weekend of direct GTP competition.

The #7 car boasted a theoretical best lap of 1m34.011s which would have shaded Blomqvist’s fastest time by 0.02s, but Nasr didn’t do all of his fastest sector times on the same attempt.

“I’m really proud of the group and all of the people that have worked together to get us to this point,” said Diuguid. “It was really fun to show the car’s true potential.

“Both cars had speed to run for the pole. We had a small mistake in the Bus Stop which was unfortunate, but the feedback from both Nick and Felipe were that the cars were really fantastic.

“We are looking forward to the Daytona 24 Hours because the cars clearly have the pace.”