Pla had a 13s lead over Derani when the safety car came out for the fifth and final time of the race with 14 minutes to go, but the Frenchman was able to extend a lead that stood at just under three seconds when the race went green to seal the victory.

The Shank Ligier had the edge on its rivals and was quickly able to come back from a lap down after slow first pitstop and the only stint in the car from amateur driver Pew.

Pla survived a late scare with just over an hour to go when he spun on the entry of the fast Turn 12 righthander after a touch from a GT Daytona Porsche.

Pla said: "The car has been amazing all week, so we always felt confident.

"This is so sweet for me because I feel I've had terrible luck this year."

Mazda Motorsports lost third place in the final 15 minutes with a fiery engine failure on its surviving SpeedSource-run Lola-Mazda B12/80 shared by Joel Miller, Tom Long and Spencer Pigot.

That promoted the Action Express Racing Coyote-Chevrolet Corvette DP of Dane Cameron, Eric Curran and Simon Pagenaud to third, but Jordan Taylor was able to nip past after the race went green for the final time to claim the final spot on the podium for the Wayne Taylor Racing Dallara-Chevrolet Corvette DP he shared with brother Ricky and Max Angelelli.

Fourth was more than enough to give Cameron and Curran the overall IMSA title.

They went into the race with a one-point advantage over team-mates Christian Fittipaldi and Joao Barbosa, but a puncture for the second of the Action Express Coyotes in which they were joined by Filipe Albuquerque cost them more than lap and left the car fifth at the finish. 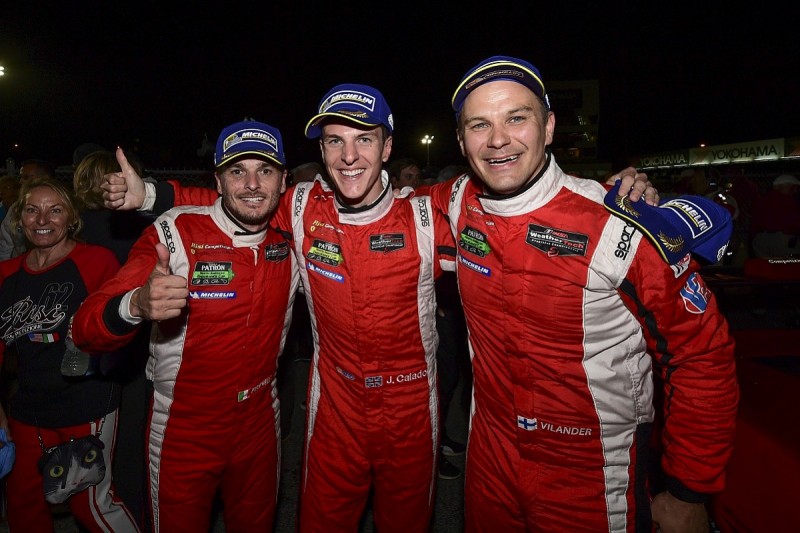 Their Ferrari 488 GTE finished just over 15s ahead of the Ganassi Ford GT shared by Joey Hand, Dirk Muller and Sebastien Bourdais.

The Ford finished with the Corvette Racing entry of Oliver Gavin, Tommy Milner and Marcel Fassler on its tail.

Third position gave Gavin and Milner the GTLM title, which was more or less a foregone conclusion after their closest rivals, Richard Westbrook and Ryan Briscoe, lost time early in the race with a wastegate problem in the Ford they shared with Scott Dixon

Tom Kimber-Smith, Robert Alon and Jose Gutierrez took victory in the Prototype Challenge class for the one-make ORECA-Chevrolet FLM09 with the PR1/Mathiasen squad.

That put them equal on points with Renger van der Zande and Alex Popow, who finished sixth together with David Heinemeier Hansson, but the Starworks drivers claimed the title on countback.

But a drive-time violation for the Audi R8 LMS that Lally shared with Marco Seefried and John Potter handed victory to Bleekemolen and team-mates Ben Keating and Marc Miller.

The GTD title went to the Scuderia Corsa Ferrari team for a second season in a row with Christina Nielsen and Alessandro Balzan.

Farewell to an international behemoth