Tom Blomqvist converted his pole into the early advantage in the title-leading Acura ARX-05, running ahead of Earl Bamber in the Chip Ganassi Racing Cadillac DPi-V.R.

But Blomqvist's lead didn't last long, Bamber getting ahead on lap six, before it was then the Chip Ganassi Racing Cadillac of Sebastien Bourdais that cycled into the lead following several full course yellow periods.

However, the Ganassi crew's chances then took a turn for the worse when, with Scott Dixon at the wheel approaching mid-distance, it was handed the first of two drivethrough penalties for not meeting tyre pressure requirements, which dropped Dixon back to sixth.

Up at the front, there was a close battle between Loic Duval in the JDC Miller Cadillac and Mike Conway in the similar Action Express car.

But several other crews were still firmly in the mix with the Wayne Taylor Racing Acura - which had pitted on the very first lap of the race after Ricky Taylor damaged its tyres with a qualifying spin - cycling into the lead on an alternate strategy.

However, Filipe Albuquerque was then delayed by a spinning LMP2 car, which handed the advantage back to Pipo Derani in the Action Express Cadillac.

But Albuquerque was content to remain in second, given his rival for the title was down in fourth at this stage. 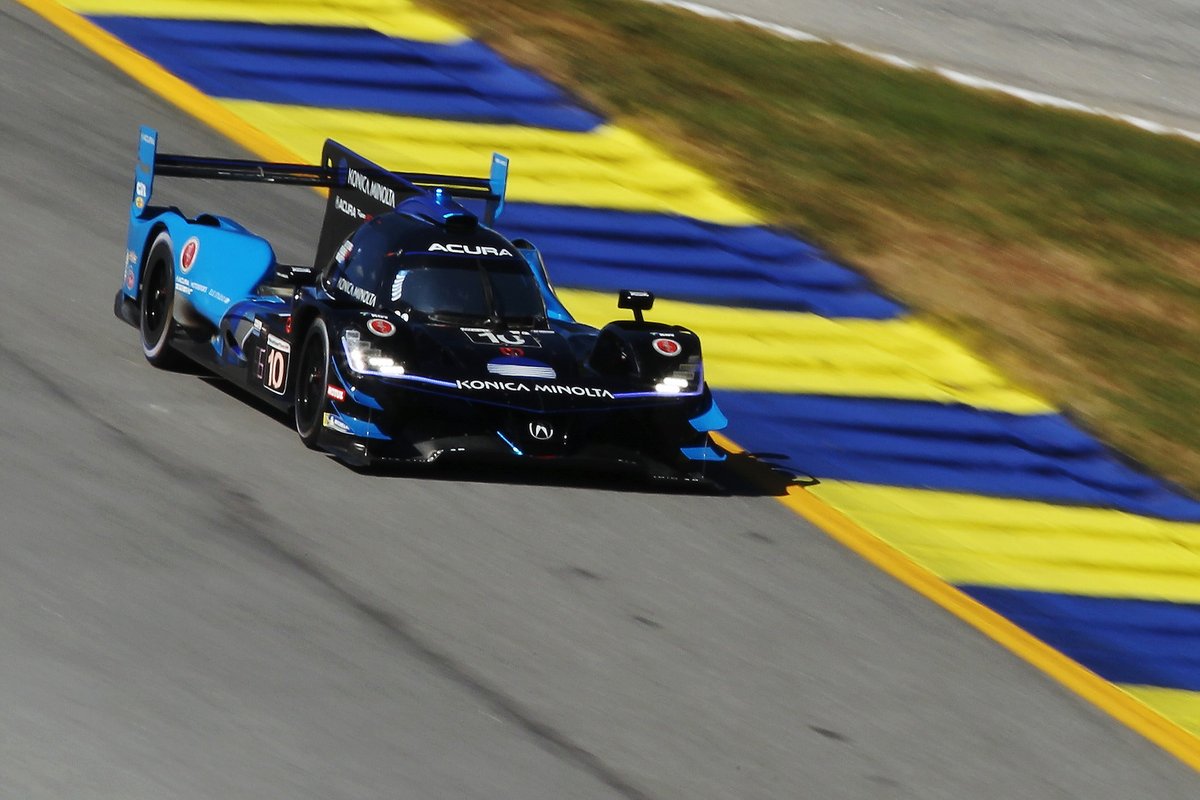 With around  two hours to go, the #01 Cadillac of Bourdais appeared to improve its chances, with the sister car of Alex Lynn falling off the track briefly just ahead before it pitted and Lynn gave up his ride to Bamber. Bourdais then pitted, and CGR got his replacement Renger van der Zande out ahead of Meyer Shank Racing’s #60 Acura, in which Blomqvist had replaced Helio Castroneves.

Olivier Pla also had a brief off in the #31 Action Express Cadillac but he had second place in his hands, 13 seconds behind Albuquerque, but being pressured heavily by Bamber.

But one of the key moments of the race came with with 50mins to go, when the two Ganassi Cadillacs collided. Bamber got held up by the Korthoff Mercedes GTD car, allowing van der Zande to get a run on him on the outside approaching Turn 1, and the pair made side-by-side contact that sent them both into the gravel on the outside and into the tyre wall.

That of course brought out the full course yellow, and when the Acuras pitted, Meyer Shank Racing got Blomqvist out ahead of Albuquerque, who then pitted for a second time to top up fuel without losing position.

At the restart, with little more than half an hour to go, Blomqvist retained the lead from Albuquerque, and they were now being pursued by Derani.

Blomqvist briefly stretched out a small lead on the restart, before he came under intense pressure from Albuquerque as they encountered GT traffic. But it was that very traffic that also proved the WTR car’s undoing, Albuquerque making contact with the Winward Racing Mercedes.

The car trickled slowly to the pits with a dozen minutes to go, leaving the MSR Acura to triumph - Blomqvist and Castroneves sharing with Oliver Jarvis - by four seconds from Derani, Conway and Pla.

Kamui Kobayashi, Mike Rockenfeller and Jimmie Johnson came home third in the second AXR Cadillac, one lap down having been penalised for spinning its wheels while the car was up on its jacks during one of Johnson's stops. 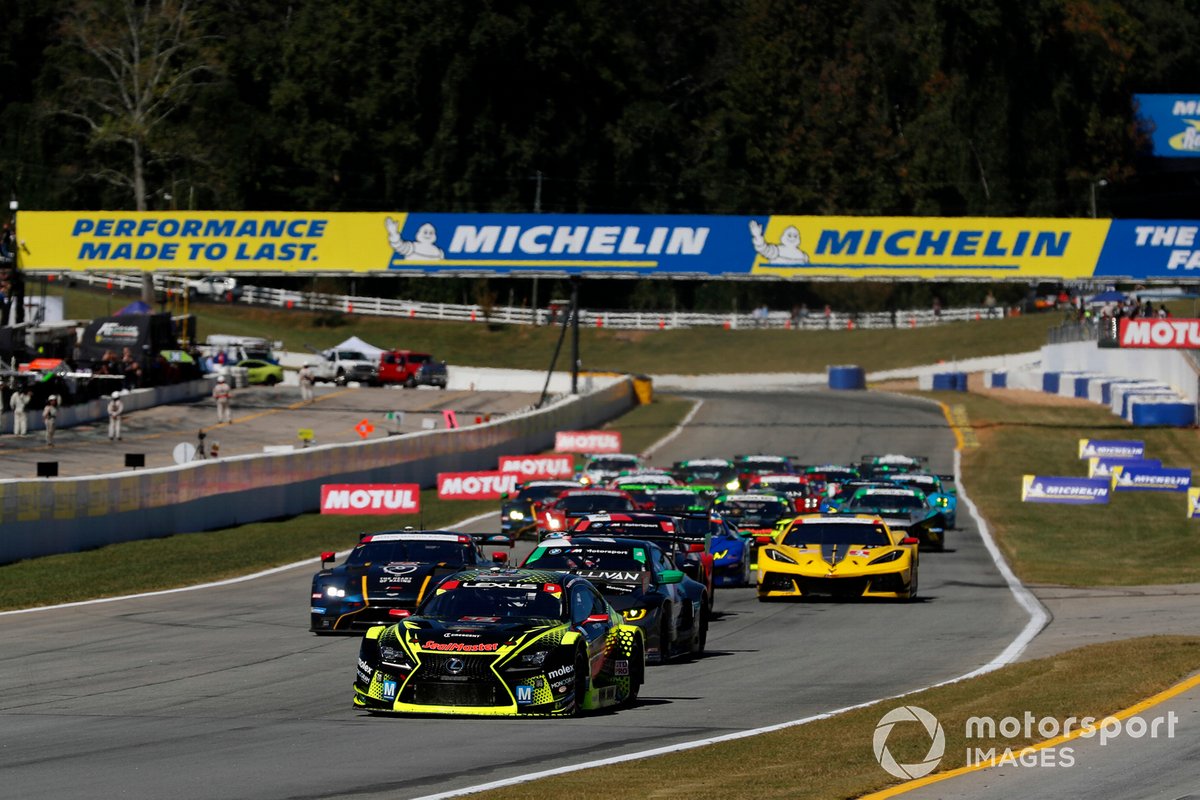 There was drama after the race in GTD Pro class, the Risi Competizione Ferrari of Daniel Serria, James Calado and Davide Rigon having seemingly triumphed having snuck ahead of the leading Lexis and the Pfaff Porsche in a double move down the inside of both at Turn 10.

But Serra had driven four hours and 11 minutes in the last six hours of the race, a violation of IMSA’s drive-time rules, meaning Risi Competizione was moved to the back of the lead lap.

Thus Jack Hawskworth, Ben Barnicoat and Kyle Kirkwood clinched victory for the Vasser Sullivan Lexus, ahead of the RLL BMW and the Pfaff Porsche - the latter's Matt Campbell and Mathieu Jaminet taking the class title by virtue of simply starting the race.

There was more success for Acura in the GTD division, as the Gradient Racing NSX of Kyffin Simpson, Tim Bechtolsheimer and Mario Farnbacher took the spoils.

However, seventh in class was enough for Heart of Racing Aston Martin driver Roman de Angelis to clinch the GTD drivers' title.

In LMP3, Andretti Autosport's Ligier won with Jarett Andretti, Gabby Chaves and Josh Burdon at the wheel ahead of Jr III Motorsports and Sean Creech Motorsport, but title honours went the way of Colin Braun and Jon Bennett of CORE Autosport in fifth place.