Colton Herta says he didn't believe he could pull off the pass on Louis Deletraz for DragonSpeed's third Daytona 24 Hours LMP2 victory, after starting his final stint in second.

Although this was his fourth time in the IMSA SportsCar Championship classic – and he won the GTLM class on his debut with BMW in 2019 – it was his first IMSA outing in a sports prototype.

From three laps down at one point, the team got back onto the lead lap and led the class by just under half a minute with a little under two hours to go when caution flags flew for a spun and stalled GTD car. That erased DragonSpeed’s advantage and allowed Tower Motorsports onto Herta’s tail for the restart.

Gradually Herta inched away but with 50 minutes to go, another full course yellow flew for a broken-down LMP3 car, and by not giving its car new tires in the subsequent pitstop sequence, the Tower team was able to jump Deletraz ahead of Herta.

At the final restart, Deletraz had the lead out to 1.2s, but Herta whittled it down as the Tower driver had to save fuel and with 10 minutes to go he was in the Swiss driver’s slipstream.

“I knew that I would have a little bit of a grip advantage,” said Herta, “but it is quite difficult to get a run and pass in these cars, especially with the Bus Stop [now known as the Le Mans Chicane]. You get a lot of aero wash.

“It took a few tries and it didn't happen until I got a little help from traffic. It was always kind of give and get with the traffic. 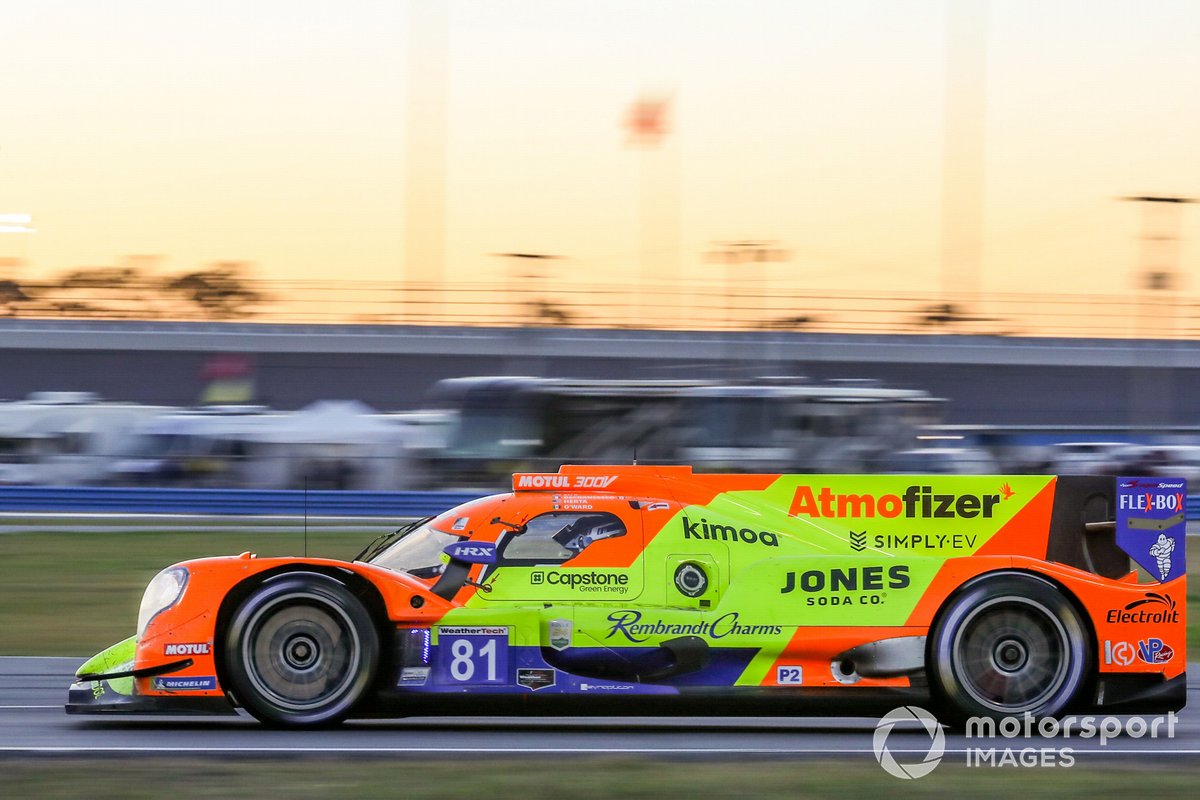 "For the most part I was kind of getting screwed with my runs to the Bus Stop, and eventually I was in the situation where [Deletraz] got screwed.

“He was trying to lift and set up and get a little bit of a gap from a GT car [ahead] so he could go through the Bus Stop and get a run on the exit so I wouldn't get a run, if that makes sense. And when he was lifting, I was able to dive up the inside.

“I wasn't sure how it was going to happen. I knew I was going to need a little bit of help with traffic. I didn't think I could pass him just straight up pace. But luckily we got some help there.”

Herta’s bold pass into the chicane left Deletraz with no room to make it through the chicane without using the grass. He lost enough momentum that Giedo van der Garde in the Racing Team Nederland entry also passed to claim second with Rinus VeeKay, Dylan Murry and car owner Frits van Eerd.

Asked if he felt discouraged when the DragonSpeed car had been three laps down, Herta replied: “I don't think anybody ever is because they know, if there's 16 hours left and with 61 cars, there's going to be a bunch of cautions.

“And you'll get the pass around, wave around: you'll get your lap back. I wasn't worried.”

Deletraz, Ferdinand Habsburg, Rui Andrade and John Farano had to settle for third, with Deletraz writing on Twitter:“Obviously disappointed as we lost it 10mins to go but very proud of the whole team.

“@coltonherta, I was mad after the finish but fair enough I would have done the same if I was behind you. Hard racing and we’re here for that. Congrats guys.”