Ricky Taylor maintained the lead after taking over from the Portuguese driver in the #10 car.

At the start of the 10th hour, Ganassi had effectively taken the lead from AXR's #48 machine as Renger van der Zande jumped NASCAR legend Jimmie Johnson in the pitstop phase.

At the same time, the JDC-Miller MotorSports Cadillac was effectively eliminated from contention when Tristan Vautier made contact with the Wright Motorsports Porsche 911 GT3 R at Turn 1, which sent the former behind the wall for lengthy repairs.

Van der Zande was some eight seconds to the good when he pitted to hand over to ex-Formula 1 star and IMSA debutant Kevin Magnussen towards the end of the hour, but the Dane's advantage was eliminated by the onset of the caution.

The top five all pitted when the yellow flags flew, but at the restart Albuquerque - who had moved up to second before the caution after taking over the WTR Acura from Alexander Rossi - swooped around the outside of Magnussen and into the lead.

Albuquerque held the lead up until his stop at the start of Hour 12, and after coming under some pressure from Simon Pagenaud in the #48 AXR Cadillac, remained narrowly ahead of Rockenfeller as the clock ticked past 3.40am local time. 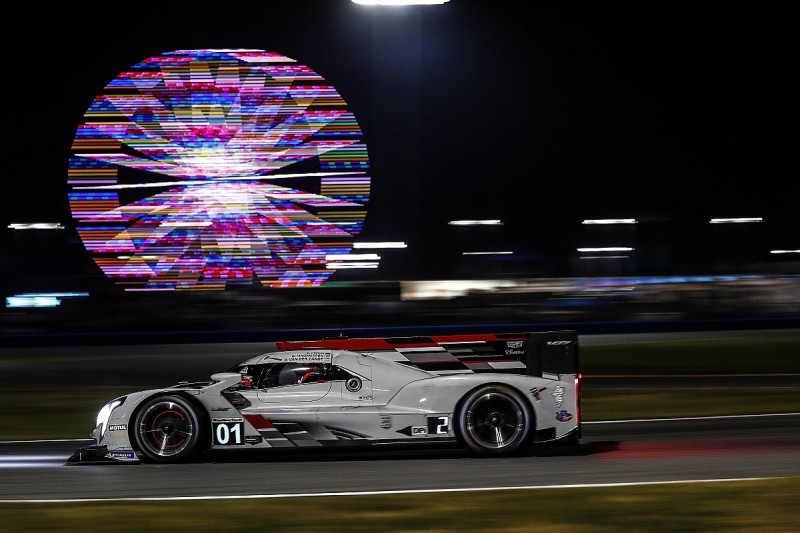 Magnussen was third and 12s down on the leaders, while reigning NASCAR champion Chase Elliott was running 35s off the lead in fourth in the Whelen Engineering-sponsored #31 AXR Cadillac and just ahead of Juan Pablo Montoya in the Meyer Shank Racing Acura.

The sole Mazda had clawed its way back on the lead lap thanks to the caution, but then had to pit for a new rear deck when its rear lights stopped working.

That left the RT24-P shared by Harry Tincknell, Jonathan Bomarito and Oliver Jarvis three laps down, while the JDC-Miller Cadillac was circulating 46 laps down.

In LMP2, the Cetilar Racing Dallara had opened up a big lead over the best of the Orecas, the Tower Motorsport by Starworks car.

Matthieu Vaxiviere had grabbed the advantage in the Tower car with a pass on the WIN Autosport Oreca of Steven Thomas, but that was negated by the caution period - which allowed the Dallara driven by Giorgio Sernagiotto to take the lead.

Sernagiotto handed over to Roberto Lacorte towards the end of the 12th hour, but the Italian was still 25s clear of Vaxiviere at the halfway mark. Christopher Mies ran third in the sole remaining DragonSpeed car, a lap behind.

In LMP3, the #74 Riley Motorsports Ligier, with Scott Andrews at the wheel, held a massive three-lap lead over the #6 Muehlner Motorsports Duqueine.

The Sean Creech Motorsports Ligier that had been in the mix was also three laps off the lead after having had to go behind the wall, with Wayne Boyd at the wheel. 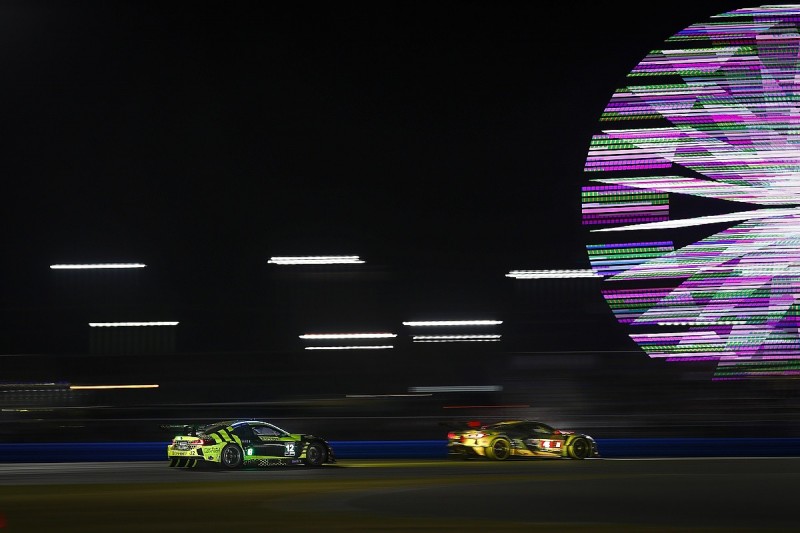 Corvette Racing maintained a 1-2 in the GT Le Mans class, with Nick Tandy in the #4 machine around six seconds clear of Jordan Taylor in the sister #3 C8.R.

Tandy took the advantage after taking over from Tommy Milner in Hour 10, and while Taylor initially stayed within a few seconds of the Corvette newcomer, his pace faded as his stint went on, falling back towards the third-placed BMW M8 GTE of Jesse Krohn.

Risi Competizione's Ferrari 488 GTE fell to fourth in class after the caution, following a long spell in third behind the Corvettes, while the second BMW of Philipp Eng was fifth.

Prior to the caution, the Ferrari in the hands of Simon Mann had been more than 20 seconds to the good, but the caution shuffled the order considerably, allowing Mikael Grenier to surge through into the lead in the SunEnergy1 Mercedes.

Engel made it a Mercedes 1-2 after moving up to second, before taking the lead late in Hour 11. Mann likewise passed Grenier before handing over to factory Ferrari driver Serra.

Grenier was running third ahead of Darren Turner in the Heart of Racing Aston Martin and Zacharie Robichon in the Pfaff Motorsports Porsche 911 GT3 R.

Two of the leading contenders in the class dropped down the order, as the Paul Miller Racing Lamborghini Huracan GT3 lost ground with a brake change and the only surviving Vasser Sullivan Lexus lost five laps with a reported water system problem.