Joao Barbosa claimed pole for the IMSA SportsCar Championship opener in the Mustang Sampling ACR Cadillac DPi-V.R with a time of 1m36.903s.

That put him sixth hundredths up on team-mate Dane Cameron in the sister Whelen Engineering Caddy Daytona Prototype international, which ended up on a 1m36.973s.

Barbosa said: "It took a while for the tyres to come up to temperature, but when they did I could do anything I wanted with the car.

"It's a great result for Action Express and it's good to know that you have your team-mate next to you going into Turn 1."

Neel Jani was third fastest aboard Rebellion Racing's ORECA-Gibson 07 LMP2 on a 1m37.123s.

Ricky Taylor made it three Cadillacs in the top four aboard the Wayne Taylor Racing Cadillac with a 1m37.169s. 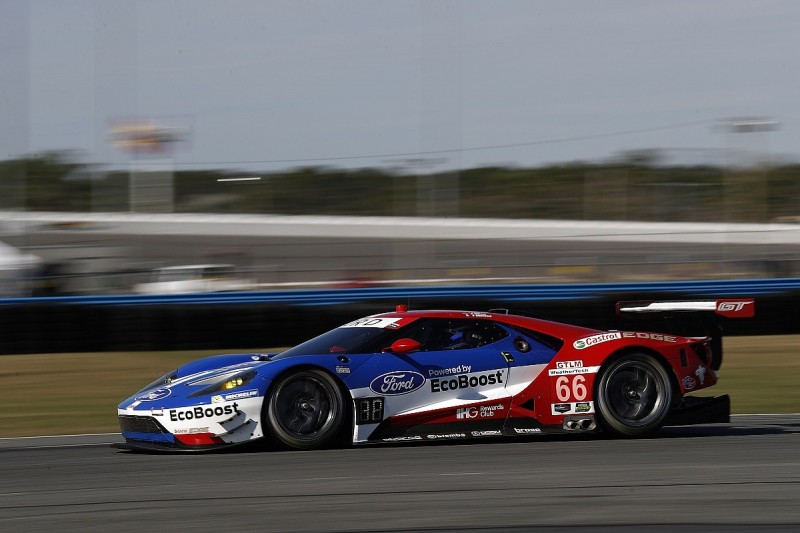 Hand said: "I got a really good front side of the lap, but shoved it a bit too deep into Bus Stop.

"I got a bit of dirt, but the lap was good enough."

Olivier Pla was a further three tenths back on a 1m43.987s in the best of the British-based World Endurance Championship Ganassi team's entries.

Ferrari ended up fourth with a 1m44.121s from Toni Vilander in Risi Competizione's solo 488 GTE.

Patrick Pilet took fifth place for Porsche at the wheel of the best of the new rear-engined 911 RSRs on a 1m44.251s.

The two Chevrolet Corvette C7.Rs, which finished one-two in class at Daytona last year, ended up seventh and ninth in the 11-car GTLM field.

The battle for pole in the GT Daytona class was fought out by the two Ferrari 488 GT3s on the entry list.

Alessandro Pier Guidi claimed top spot for the Spirit of Race squad, a spin-off of the AF Corse team, with a 1m47.099s.

A late effort from reigning class champion Alessandro Balzan resulted in a 1m47.117s.

James French was quickest in the Prototype Challenge class for the ORECA-Chevrolet FLM09 in the Performance Tech Motorsports entry.