Antonio Garcia says Corvette Racing "deserved" to win the second round of the IMSA SportsCar Championship at Daytona having finished second eight times since his last win in 2017.

After starting with slick tyres on a damp track, Taylor managed to run one lap longer than the competition in his first stint, a ploy matched by Garcia in the second stint which brought them up to second before Garcia's race-winning pass on Bamber sealed the victory.

It was the 100th for Corvette Racing on US soil, in only the car's third race start following up a fourth-place finish in the Daytona 24 Hours and a guest appearance in the World Endurance Championship's 6 Hours of COTA in which it was lapped three times.

It was the first GTLM class victory for Corvette since Oliver Gavin and Tommy Milner's victory with the old C7.R at Long Beach in 2018, a year in which Garcia and Jan Magnussen claimed their second successive title but without winning a race.

It also ended Garcia's 25-race winless run dating back to VIR in 2017. 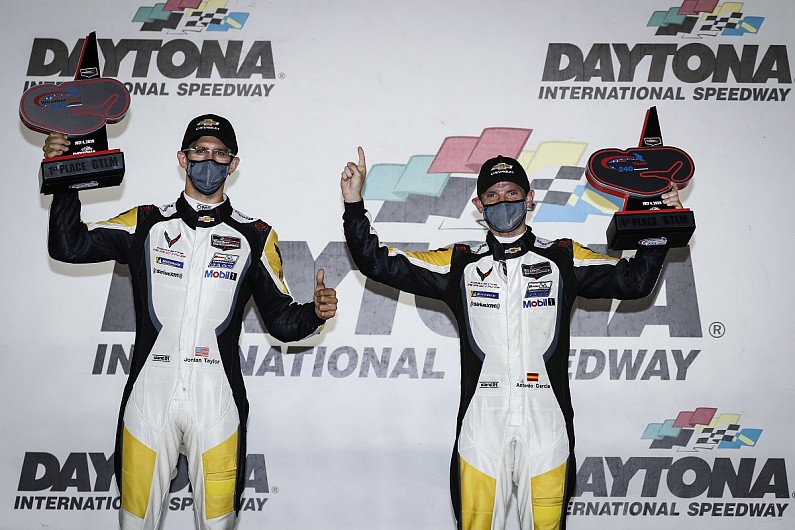 "I think we deserved this moment, we came up just short so many times even though we won championships," he said.

"This means a lot. Our last win was at VIR in 2017 and from then until now, you look at all the times we finished second and how many times we could have won a race, so I'm very happy for today.

"There was great execution in the race and we didn't make a single mistake, it really showed that we learned a lot from the Rolex 24.

"This was a perfect day for us with the first pole and first win for the Corvette C8.R. Hopefully this is the first of many."

Garcia added that Taylor "did a perfect job" on fuel-saving, with Taylor explaining that the coronavirus hiatus had given the Pratt & Miller squad which runs the factory Corvette team a chance to "make some headway" with the car.

"Our fuel mileage, engine and drivability at the beginning of the race was much better than the first race," he said.

"We rolled off the truck this week very strong, which was good with the limited track time.

"The guys did a great job with pit stop execution and reading the strategy well from the beginning."