The #55 Team Joest RT24-P shared by the trio dominated much of the race, but lost the lead with an hour remaining to the #6 Team Penske Acura of Juan Pablo Montoya.

Along with the sister #77 Mazda, Tincknell hounded Montoya following a late caution, eventually grabbing the lead back with an assertive move at the Boot.

The #77 also leapfrogged back past the Penske Acura at the final round of pitstops to ensure a Mazda lock-out.

The #6 car had dramas from the beginning, with Montoya's team-mate Dane Cameron having to start from the pitlane after discovering a cut tyre on the grid.

The race got off to a chaotic start and only three corners were completed before the first full-course caution period, caused by a heavy crash for the #4 Corvette of Tommy Milner.

Slight contact with the #912 Porsche 911 RSR of Laurens Vanthoor at the Esses tipped the Corvette across track and into the outside barriers.

Milner was then collected by the #33 Riley Motorsports Mercedes-AMG GT3 of Ben Keating, with both retiring on the spot.

The Brazilian lost control of his car and took the #5 Mustang Sampling Cadillac of Felipe Albuquerque into the gravel. Albuquerque continued, while Nasr required outside assistance. 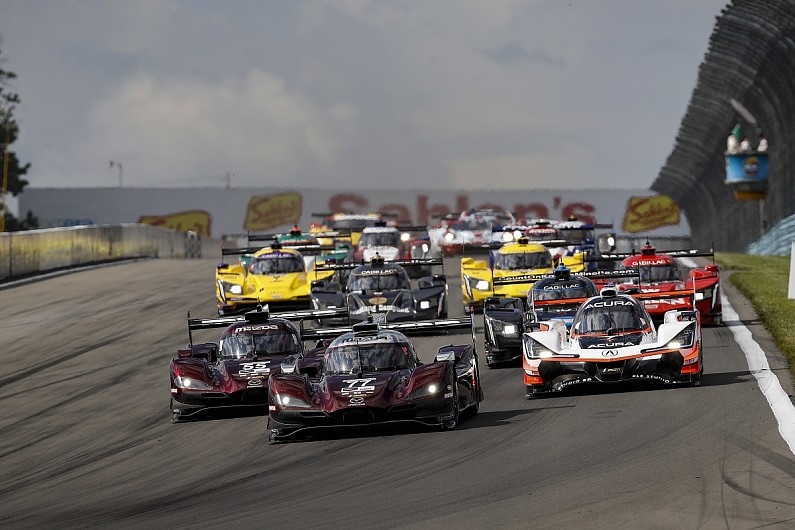 Oliver Jarvis led the early stages in the #77 Mazda once the race began properly but was usurped at the top by Tincknell, who held a narrow three-second advantage at the one-hour mark.

Having dominated from the start, the Mazdas then split their strategies after two hours, with Timo Bernhard staying out on track in the #77 while Bomarito pitted as Stephen Simpson (#84 JDC-Miller Motorsports Cadillac) brought out the third caution of the day.

Simpson made contact with the #44 Lamborghini Huracn GT3 of John Potter after being momentarily squeezed by the recovering #31 Cadillac at Turn 5.

The order in the DPi class remained unchanged until the start of the final hour as a full-course yellow was shown when Andrew Evans stopped the #38 car at the exit of the Boot.

A few laps earlier, Evans tagged GTLM leader Patrick Pilet at the Bus Stop chicane and spun into the path of the oncoming Team RLL BMW of Tom Blomqvist, who hit the ORECA head on.

This forced the leading trio of Tincknell (#55), Jarvis (#77) and Montoya (#6) into the pits, with quick work for the Penske crew shuffling Montoya to the front - only for the two Mazdas to fight back past.

Matthew McMurry came out on top in LMP2 in the #52 PR1/Mathiasen Motorsports ORECA, but was not without his own dramas, after collecting the then third placed #7 Penske Acura of Helio Castroneves at Turn 1 in the closing stages. 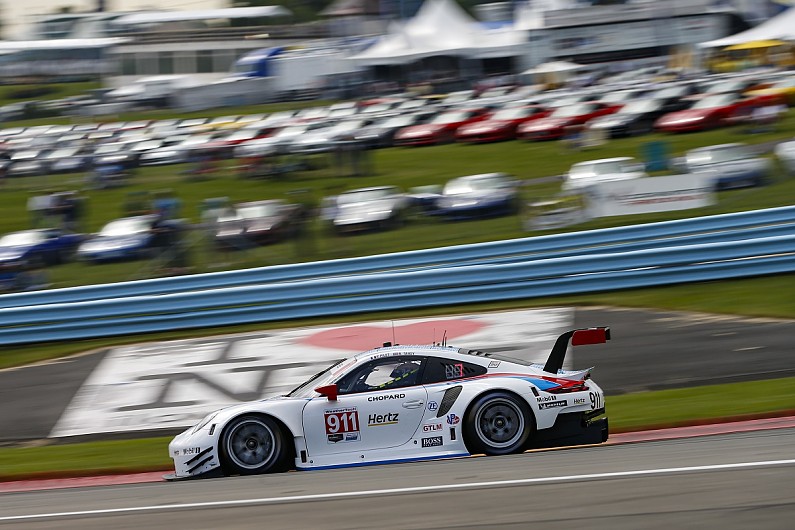 The battle for GT Le Mans supremacy went right down to the wire, with Nick Tandy and Patrick Pilet taking victory for the #911 Porsche GT Team by just half a second from Antonio Garcia in the #3 Corvette.

Garcia was the early leader following the sister #4 car's retirement, but Richard Westbrook took the #67 Chip Ganassi Ford - shared with Australian Ryan Briscoe - to the lead ahead of the two-hour marker.

Westbrook then lost the lead following a steering column issue, handing back the initiative to the Porsche of Tandy.

After the final caution, Garcia hounded Tandy, with the Brumos-liveried Porsche just hanging on to win with Westbrook recovering to finish third.

Farnbacher had been running second heading into the final 15 minutes, but made a late lunge round the outside of leader Ryan Dalziel (Starworks Audi R8) at the chicane to claim victory for Meyer Shank Racing Acura.