New Mazda signing Harry Tincknell reckons the pace of the revised RT24-P Daytona Prototype international bodes well for the remainder of the IMSA season, even though both cars retired from the series opener at Daytona.

"At times we were the quickest car on the track and we were fast in the wet," Tincknell, who shared the #55 Mazda with Jonathan Bomarito and Spencer Pigot, told Autosport.

"We've shown pace on what we were always expecting to be our weakest track of the season, which proves the potential in the package for the rest of the year.

"The Mazda was nearly 3.5 seconds faster in qualifying than last year, so that shows we've taken a big step forward."

Oliver Jarvis, who raced the #77 car with Tristan Nunez and and Rene Rast, described the lessons learned by Joest at Daytona as invaluable.

"To get out and race in a 24-hour event like this, put everything under stress, is fantastic," he said.

"We've learned so much about the car here, what needs fixing.

"The Sebring 12 Hours [in March] isn't far away, but I'm certainly optimistic for the shorter races."

Joest team boss Ralf Juttner insisted that "there were positives for all the negatives" to be taken from Daytona.

"We've taken a big step forward since the Roar [the official pre-race test in early January," he explained.

"The 15kg [minimum weight reduction] Balance of Performance change is noticeable, but we have made progress with the car — at the Roar we couldn't get the tyres to work.

"We now have to sit down now and see how we can address the situations that we had here in Daytona." 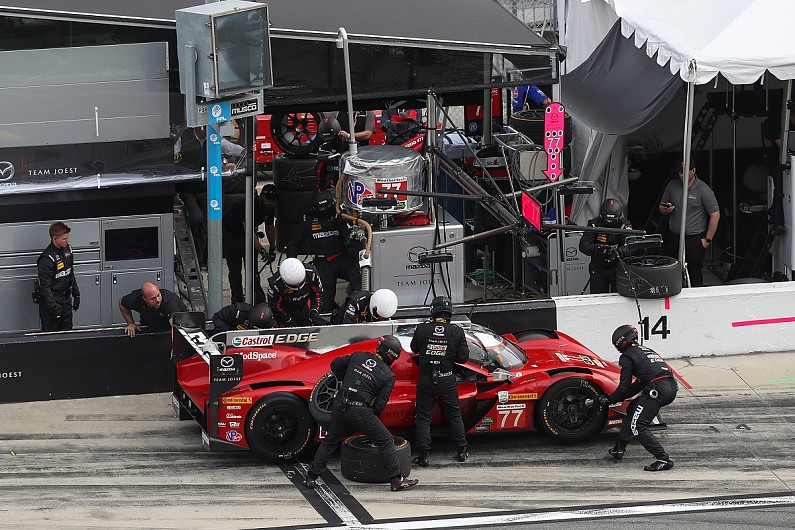 Both Mazda DPis suffered a multitude of problems after running in the top 10 in the second hour.

An exhaust problem leading to a fire resulted in the retirement of the #55 car in the 18th hour.

The team subsequently decided to withdraw the sister car less than an hour later as a result of on-going electrical issues and fear of a repeat of the fire.

The Mazda prototype programme has undergone a major overhaul for 2018 with the signing of multiple Le Mans 24 Hours winner Joest Racing and the major revision of the RT24-P by Multimatic Motorsport.