Former Ferrari Formula 1 driver Rubens Barrichello will rejoin Wayne Taylor Racing for the second round of the IMSA SportsCar Championship at Sebring later this month.

The winner of 11 grands prix is being given another chance aboard the squad's Dallara-Chevrolet Corvette DP, after being brought in at the last minute for the season-opening Daytona 24 Hours in January as cover for the ill Jordan Taylor

Barrichello will again line-up alongside Jordan Taylor, his brother Ricky and team co-owner Max Angelelli in the Sebring 12 Hours on March 19.

Team boss Wayne Taylor explained that he didn't want to take any chances after all three of his drivers struggled in the heat at Sebring last year.

"Max was absolutely exhausted after a stint and then Ricky and Jordan started to struggle - I don't want to be in that situation again," he told Autosport.

"Daytona was all so late for Rubens: we didn't get a chance to make him a seat and he didn't get much time in the car.

"I still want to get to know him because you never know what is going to happen in 2017, and on top of that he is such a nice bloke."

Barrichello, who finished second at Daytona with WTR, got further experience in the Dallara at the official Sebring test earlier this month.

The WTR Dallara is one of 12 cars in the Prototype class on the entry list for Sebring.

The grid will be boosted by the debut of the DragonSpeed ORECA-Nissan 05 LMP2 ahead of its European Le Mans Series assault and the Alegra Motorsport Riley-Dinan/BMW MkXXVI, whose drivers include Dominik Farnbacher.

The Daytona-winning Extreme Speed Motorsports Ligier-Honda JSP2 returns with an unchanged line-up of Luis Felipe 'Pipo' Derani, Johannes van Overbeek, Scott Sharp and Ed Brown for what is scheduled to be its final IMSA appearance this season.

The Ferrari 488 GT3 will make its race debut in the GT Daytona class at Sebring in the hands of Scuderia Corsa drivers Alessandro Balzan, Christina Nielsen and Jeff Segal.

Lamborghini's entry has increased from five to six Huracan GT3s with the addition of a second car from Change Racing.

Former Daytona winner Terry Borcheller returns to Konrad Motorsport to drive its lead Lambo, 15 years on from winning the American Le Mans Series GT crown at the wheel of a Saleen S7R run by the Austrian team. 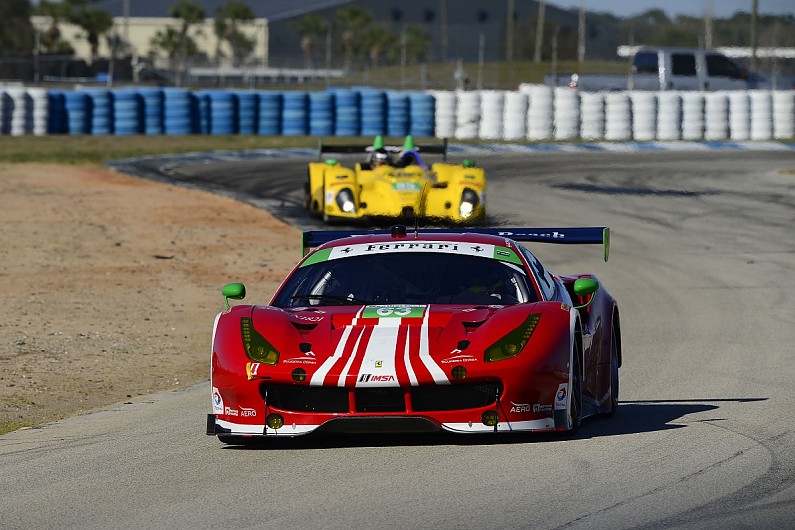