Joao Barbosa held off a determined Oswaldo Negri Jr to claim victory for himself and Action Express team-mate Christian Fittipaldi in a crash-strewn United SportsCar race at Road America.

The lead pair were shuffled up the order as a result of pitting out-of-sync and a dose of luck with the arrival of the final two caution periods.

After trading places with Michael Shank Racing co-driver John Pew, Negri followed the Action Express car up the order as others pitted and began hounding Barbosa as the race resumed, only to be halted by the sixth and final caution period when Christopher Haase in the #48 Paul Miller Audi R8 went off into the gravel at Turn 2.

That resulted in a 10-minute sprint to the chequered flag and Barbosa clung on to the lead. Despite valiant attempts by Negri, it was the Corvette that crossed the line first, which means Action Express continues to be the only team to have completed every race lap this season.

Barbosa and Fittipaldi entered the race leading brothers Ricky and Jordan Taylor by two points, and their position in the championship is slightly more secure after the latter crashed out during the penultimate caution period.

Running sixth having just pitted, his steering malfunctioned and he crashed into the tyre wall just before the Carousel.

Richard Westbrook and Michael Valiente made a great recovery drive from the rear of the field to finish fourth overall. The Spirit of Daytona drivers failed a post-qualifying inspect and were sent to the back of the 50-car pack. 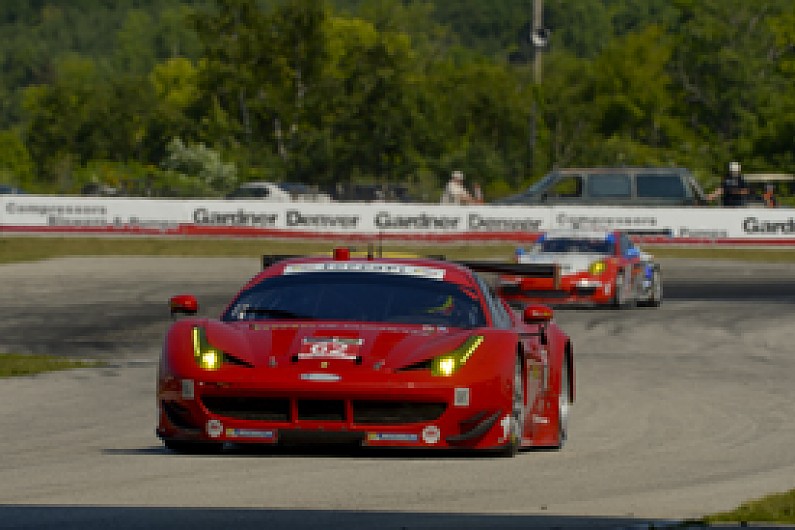 Risi Competizione carried its momentum over from its previous best outing of the season at Indianapolis and went one better at Road America as Giancarlo Fisichella and Pierre Kaffer claimed a dominant victory.

The Ferrari duo led GTLM for the majority of the race, thanks in part to the #56 RLL BMW being down on performance having suffered front left panel damage when tagged in an early race incident involving Duncan Ende in the erstwhile PC leading RSR car and Scott Mayer in the Starworks Riley-HPD Prototype.

Jonathan Bomarito made a last lap lunge on the poorly BMW, but it came to nought and the #93 SRT Viper remained third in class.

Duncan Cameron and Markus Plattala traded second on the grid for first in GTD and did so by 2.169s over the Porsche 911 of Cooper MacNeil and Leh Keen.

Madison Snow and Jan Heylen completed the category podium after a muted race.