Hill settled into fourth as the early lead tussle raged between Dutch teenager Olivier Hart (late-built Cobra Daytona coupe) and American Michael Gans in his Cobra. When Anthony Galliers-Pratt's Porsche 911 rolled onto its side opposite the Wing, triggering a safety car, Gans pitted before the window opened and was sent back round before Andy Wolfe was installed.

Once the pitstop stagger sequence unwound, Hill passed Ron Maydon's Ginetta G4R to lead from James Dodd (Jaguar E-type), the recovering Wolfe and John Spiers (TVR Griffith). Dodd did Hill a favour, repelling Wolfe until Brooklands on the final lap. Wolfe then hounded down Hill, who nailed Maggotts, but decided against a move into Becketts "which might have taken us both off".

As Spiers "used the last of my brakes" in passing Dodd's Jag into Stowe, Hill exploited every last reserve of the Elan's agility and cornering speed through Club to keep Wolfe's snarling Cobra behind. "Absolutely awesome," beamed the ecstatic Hill to a rapturous reception. "If that doesn't start my historic career I don't know what will!" 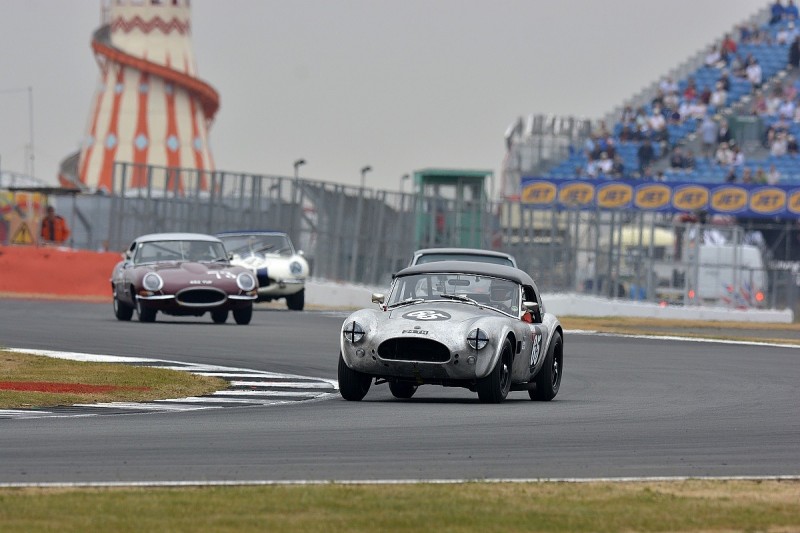 The GT highlights had started in the morning's RAC Tourist Trophy Pre-'63 race when Martin Hunt sowed the seeds of a magnificent victory by shaking off three of the quickest Jaguar E-type drivers - Andrew Kirkaldy, James Cottingham and Sam Hancock - in his narrow-arched AC Cobra.

After Kirkaldy's FHC expired smokily, Cottingham "came out of nowhere" to challenge Hunt, who relayed Patrick Blakeney-Edwards after six and a half laps. Gregor Fisken replaced Hancock but it wasn't until Cottingham put Harvey Stanley in that hard-charging PBE returned to the top.

A staggering 111 competitors in chassis representing 33 marques qualified for the culmination of the FJHRA's Formula Junior's 60th anniversary world tour, filling grids with 1958-'60 and '61-'63 cars in the presence of category founder Count 'Johnny' Lurani's daughter Ciga.

Qualifying order sets the grids for both FJ races, thus Jackson had to do it again on Sunday. He made it to a brilliant second, almost 12 seconds behind Wilson, after de Silva fell, having lost first, third and fifth gears. "On the last but one lap the cockpit filled with smoke on the Hangar Straight," puffed Sam, having landed his 11th successive Classic victory. Pete Morton (Lightning Envoyette) was third.

Motor Racing Legends' earlier sports-racing set provided a wonderfully evocative RAC Woodcote Trophy field, from which Gary Pearson emerged on top in a long-nosed Jaguar D-type. His success was hard-won though, for with Fred Wakeman's Cooper-Jaguar T38 within striking range Gary hit oil at Stowe. "I hit the lock-stops [trying to catch it] but how it didn't spin I've no idea," grinned the local ace. 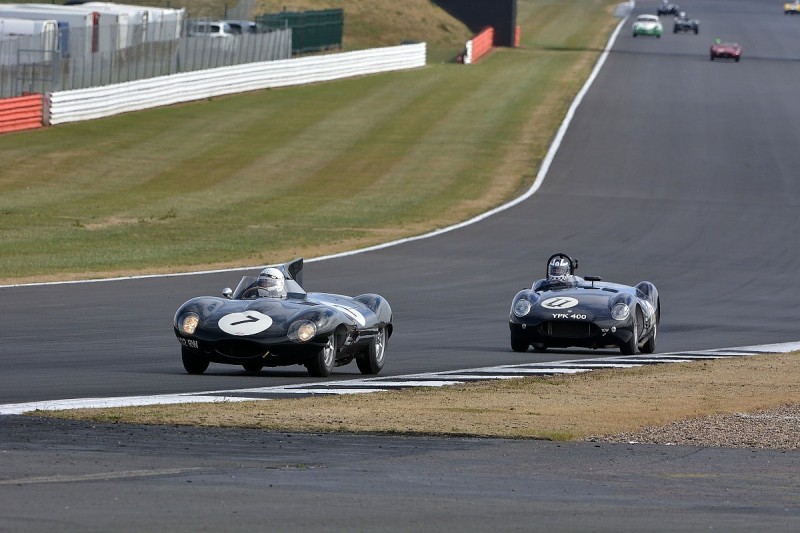 Wakeman edged past a couple of times, but the pair pitted together, allowing Martin Stretton to lead in Richard Wilson's glorious Maserati 250S. Gary resumed as Fred handed the ex-Tommy Sopwith car over to Blakeney-Edwards, but Pearson just had the legs on his rival. Brother John Pearson's scary exit, stage left, when his short-nosed D-type's engine blew exiting Chapel Curve two laps from home, sending it spinning, "took the edge off things" although it stopped short of the wall.

First Escort home was Ben Gill's very original Jolly Club Mk1 after David Tomlin had a massive spin at Stowe while fighting with Dance, then pitted with a puncture. Grahame and Olly Bryant won the concurrent Tony Dron Trophy race, outrunning the Capris in their Richard Lloyd Chevrolet Camaro.

One has to scroll back to Ollie Hancock's Fittipaldi F5A triumph in 2014 for somebody other than Nick Padmore, Michael Lyons or Martin Stretton to win an FIA Masters Historic F1 round at the Classic. The three champions fought it out again on Saturday, until youngster Matteo Ferrer-Aza - ragging a Ligier JS11/15 - tapped Stretton's Tyrrell 012 into a spin at Loop, for which he apologised. 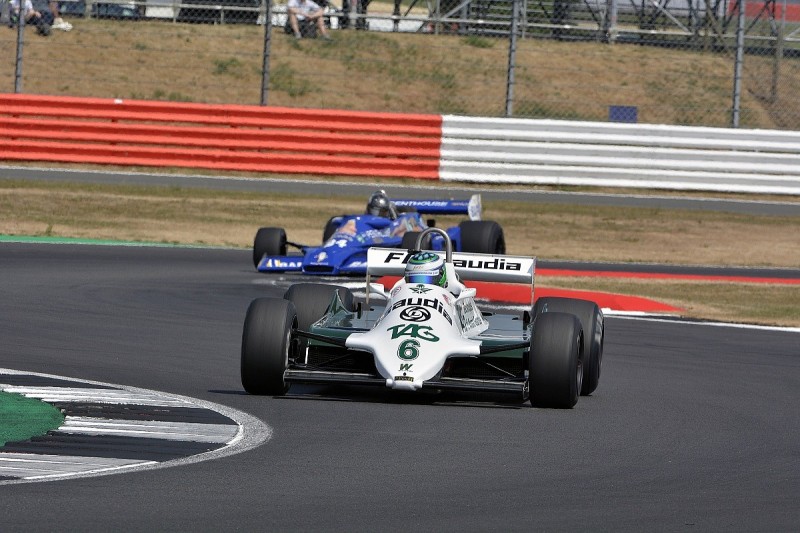 Padmore and the ex-Carlos Reutemann Williams FW07C were untouchable, despite Lyons' efforts back in his faithful Hesketh 308E. Even with the top eight reversed on Sunday's grid Padmore passed Henry Fletcher's Hans Stuck Jagermeister-liveried March 761 to lead into Stowe on lap two and hurtled to the combo's fifth win in six event starts, plus the recent British GP support race. Lyons and Stretton were runners-up.

Oliver Bryant won the FIA Masters Historic Sports Car race in his Lola T70 Mk3B, but most of the 50-minute event was dominated by the Banks brothers' ex-Jo Bonnier McLaren M6B. Andrew started the five-litre car that finished second in the 1968 Swedish GP from pole and pulled away.

Max Banks was 10s clear when the McLaren's gearbox jammed in third with 10 minutes to go. Bryant swept through to victory, 2.6s ahead of Gans - who picked up a 5s penalty for pitlane speeding - but was still classified ahead of Diogo Ferrao's BIP Lola T292, finished by Martin Stretton. Henry Fletcher (B19) was an excellent fourth and top Chevron, ahead of Ferrari racer Gary Culver's T70. 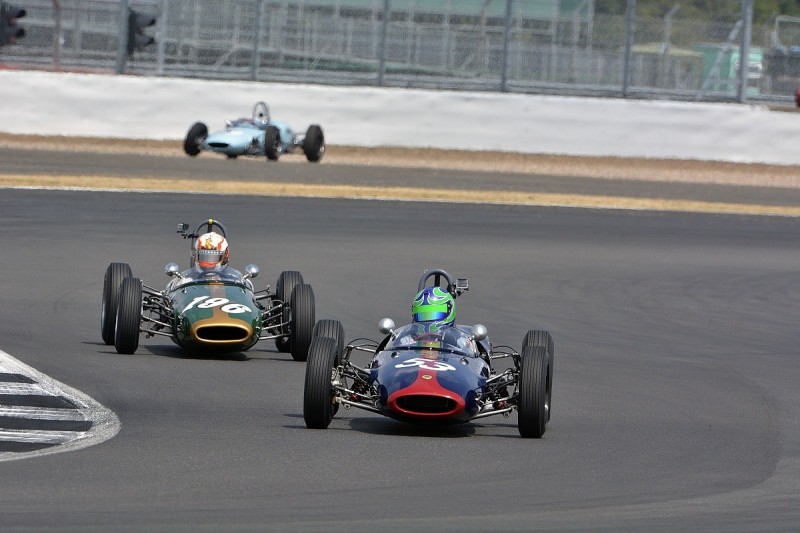 Sunday's sequel was a bizarre race of attrition. Nuthall's engine conked out on the warm-up lap, de Silva pitted with a misfire and quickest qualifier Jon Fairley suffered his second fuel pump failure of the weekend, leaving Horsman alone. Mark Daniell (Cooper T45) and Tony Wood in the TecMec-Maserati joined him on the podium, having started eighth and 15th. 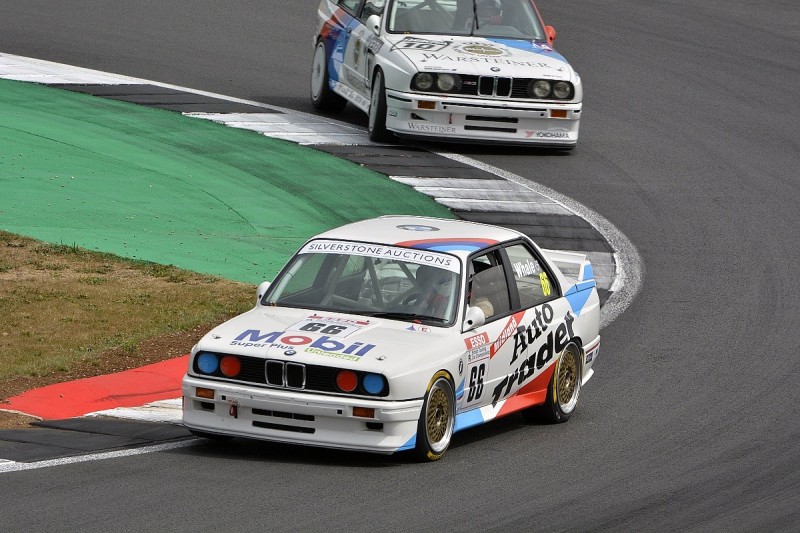 Rickard Rydell pipped James Dodd to Super Touring pole position by 0.043 seconds, but the returning 1998 British Touring Car champion was outfumbled on the opening lap of race one. Despite squeezing Abbie Eaton's 500bhp Holden Commodore at the rolling start, Rydell had to give way at Abbey, then lost out to Dodd exiting the Loop.

Dodd's Honda Accord got up the inside of Eaton at Club at the end of the first lap, with Rydell's Volvo S40 following and the top two quickly pulled clear. Rydell pressured regular pacesetter Dodd initially, but eventually started to drop back as the Honda set fastest laps quicker than the pole time.

Eaton eventually lost out to the Vauxhall Vectra of Jason Hughes - up from sixth on the grid - but held on for fourth, ahead of double BTCC champ John Cleland's Vectra.

Rydell was beaten into Abbey by Eaton again in race two. He made it by before the end of lap one and then, with an improved set-up, reduced the 1.9s margin to Dodd. 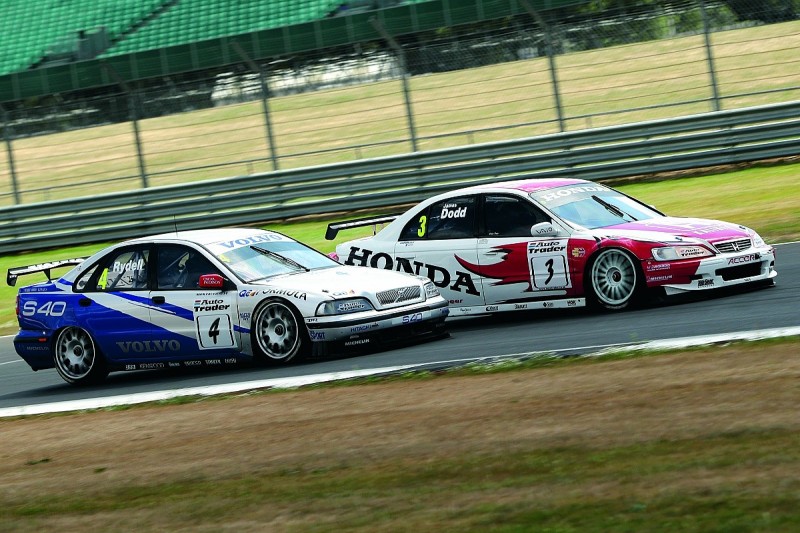 On lap four of nine Rydell dived down the inside of the Honda into the Club left-hander, but he couldn't get away. Two laps later Dodd attacked on the outside of Stowe and made it stick at Club before heading to victory by 2.3s.

Cleland overcame Eaton on the penultimate tour before the Holden stopped with engine problems. "It's special to have two legends alongside," said Dodd on the podium.

Polesitter Rob Huff was peerless in U2TC, his punishing pace from the rolling start leaving Lotus Cortina owner Andy Wolfe - a top pedaller - little to do beyond steering it home. Second for the Banks boys' raucous Alfa GTA injected Italian flair into what has become a Cortinafest.

Huff also starred in the Transatlantic Trophy in Trevor Buckley's Ford Falcon, taking pole in appalling conditions, but the car lacked pace in the dry. Sean McInerney's Ford Mustang blasted from row three to lead early on before handing over to James Thorpe.

He couldn't match his co-driver's pace and was overcome by Wolfe with six minutes to go in the Falcon started by Mike Gardiner.

Craig Davies' Mustang had the pace to challenge, but started from row 14 and lost ground during the stops. He grabbed second when Thorpe ran wide at Stowe. 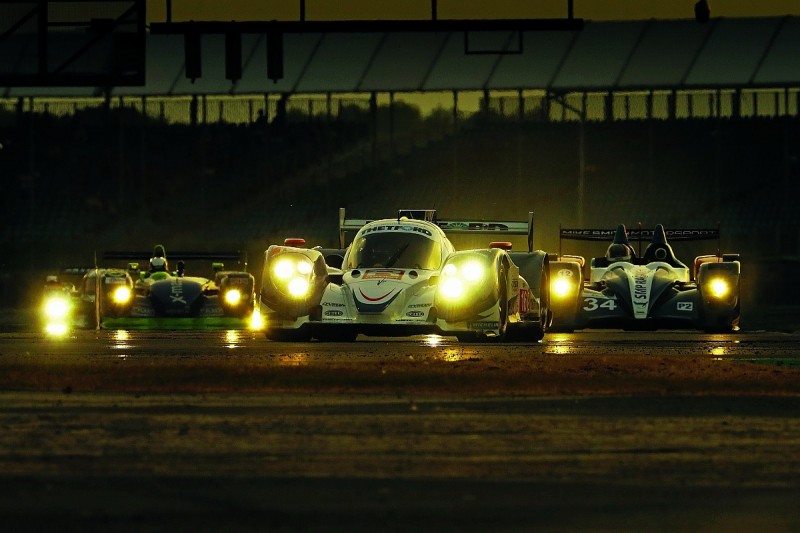 Bought after finishing second in the 2012 American Le Mans Series, the ex-Dyson Racing Lola B12/60 was a double winner in the new Masters Endurance Legends contest, in the hands of Steve Tandy.

"We've really started to get motoring," he said after a difficult start to the season. "I'm feeling more at home in the car and it just ran perfectly all weekend."

Exceeding track limits robbed Michael Lyons of pole and that allowed Tandy to steal a march into Abbey. Lyons also had to overcome a 50-second penalty for his 'elite' driver status and so, in a bid to pass to pull out a lead, he ran his ORECA 03 deep into Brooklands and ended up on the grass. But half a lap later, he wasn't going to make the same mistake and swept by Tandy under braking for Village to take the lead.

Despite Lyons' best efforts, the penalty proved too much and Tandy (above) led home from the Gulf-liveried Lola-Aston Martin of Christophe d'Ansembourg and Martin Short's Dallara SP1.

The Aston's V12 power told as he passed on the Wellington Straight. But trying to compensate for excessive understeer through The Loop, Regout mistakenly hit the pit limiter and allowed Tandy through for a 0.6s win.