Porsche claimed first blood in a topsy-turvy opening round of the GT World Challenge Europe Endurance Cup as the Dinamic Motorsport squad reprised its 2019 victory at Monza.

Christian Englehart, Matteo Cairoli and Klaus Bachler came through to claim victory at the end of the rain-effected event by 2.8 seconds from the lead Auto Sport Promotion Mercedes-AMG GT3 shared by Raffaele Marciello, Daniel Juncadella and Jules Gounon.

The best of the Dinamic Porsche 911 GT3-Rs had qualified only 12th, but Englehart had propelled the car up to fifth place in the space of 17 laps after the entire field made a switch to wet-weather Pirellis when the rain arrived.

Cairoli then moved the car through into the lead on a wet but drying track after staying on grooved rubber through the middle hour of the race.

Bachler, who was part of the winning Dinamic line-up two years ago when the GTWCE was known as the Blancpain GT Series, emerged from the final round of pitstops with a lead of six seconds.

That disappeared with a full course yellow that turned into a safety car but, when the race went green with 40 minutes to go, the German driver was able to ease away from Gounon in the ASP Merc.

The lead went up to almost five seconds, before Gounon edged back at the Porsche despite having his mirrors full of the Emil Frey Lamborghini Huracan GT3 Evo driven by Ricardo Feller.

Englehart said: "The unexpected ones are always the nicest ones.

"We didn't think we could do it; we didn't have the pace in qualifying.

"The race just came to us: Matteo was quick in the rain and Klaus was flying at the end."

Feller crossed the line in third position just three tenths behind Gounon to secure the Silver Cup class victory together with Rolf Ineichen and Alex Fontana. 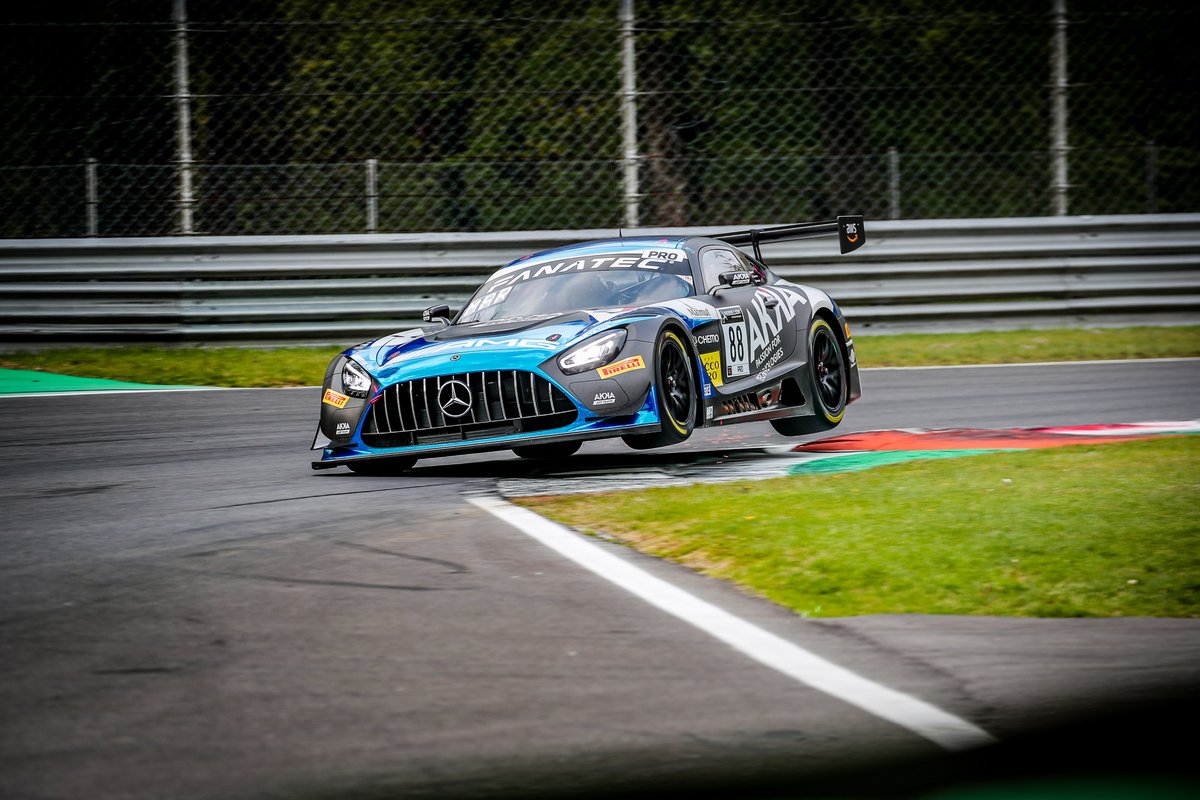 Fontana sustained a puncture during the middle hour of the race, the call by the Swiss team to send him out on slicks when he pitted subsequently paying dividends.

Feller had to fight off the advances of another car that had made an early stop for slicks, the Iron Lynx Ferrari 488 GT3 in which Antonio Fuoco finished the race.

Sportscar debutant Callum Ilott had been given slicks at the halfway mark and made rapid progress up the order in the car started by Davide Rigon.

Fuoco was fourth when the race went green for the final time, but crucially he had another of the Emil Frey Lambos, the lapped car with Albert Costa at the wheel, between him and Feller.

The Ferrari driver set a succession of fastest laps in the closing stages after moving past Costa, but ended up a shade under half a second down at the chequered flag.

The second of the factory-supported Iron Lynx Ferraris finished a further four seconds back in fifth position in the hands of Alessandro Pier Guidi, Come Ledogar and Nicklas Nielsen.

The pole-winning FFF Racing Lambo of Mirko Bortolotti, Marco Mapelli and Andrea Calderalli led the race until the race went yellow for the first time after 10 laps.

Bortolotti pitted for a set of Pirelli wets only for his Huracan to crawl to a halt as he rejoined the track.

The Lamborghini lost more than a lap while the Italian rebooted the electronics and ended up a lap down in 24th position at the end.

The Haupt Racing Team Mercedes of Maro Engel, Luca Stolz and Vincent Abril got into the lead during the second hour despite a lowly qualifying position and a poor start.

Stolz was one of a number of drivers to sustain a failure of the left-rear wet tyre as the track dried.

The HRT car made it home in 13th position, but the lead WRT entry of Kelvin van der Linde, Dries Vanthoor and Charles Weerts non-finished after it was hit by a similar issue.