The new R-Motorsport Aston Martin squad has retained its victory in the Silverstone Blancpain GT Series round in May, where it raced under appeal

The win for Aston Martin V12 Vantage driven by Nicki Thiim, Jake Dennis and Matthieu Vaxiviere in the BGTS Endurance Cup round on May 20 has been confirmed after the Arden/Jota-run team successfully argued against its exclusion from qualifying at a hearing last week.

The pole-winning car raced under appeal at Silverstone after its times were scrubbed because the official series data-logger was found to contain no information post-session.

R-Motorsport has announced the result of the hearing, which took place in front of the Royal Automobile Club of Belgium under whose permit the BGTS is run, but no further information has been released by either the RACB or series promoter, the Stephane Ratel Organisation. 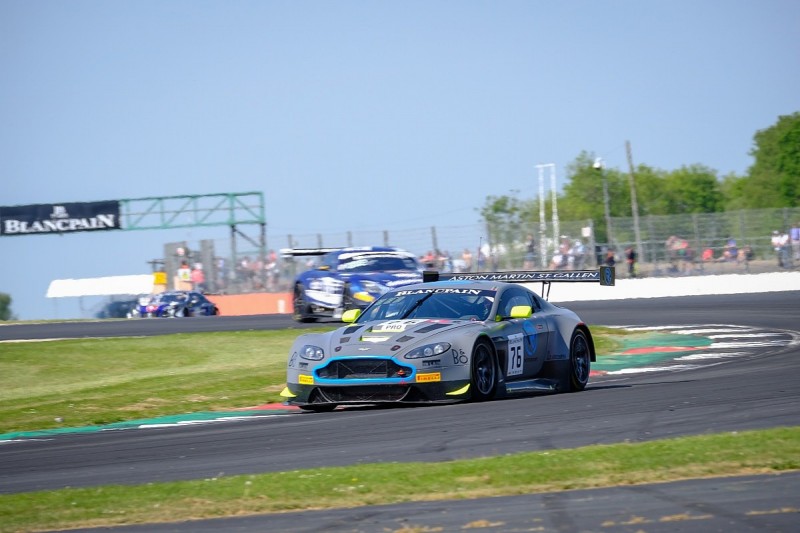 It is understood that R-Motorsport successfully argued that it provided the necessary power to the championship-supplied data-logger throughout the three-part qualifying session.

Its evidence is believed to have included on-board TV footage, which incorporated gearchange and engine rev graphics generated by the data-logger.

R-Motorsport team principal Florian Kamelger said: "We are extremely glad that the superb victory of our car #76 has been retained.

"We are now looking forward to Spa-Francorchamps 24 Hours [on June 28/29], the highlight of our season."

The confirmation of the result means that Thiim, Dennis and Vaxiviere go into the double-points BGTS round at Spa in fourth place in the championship table.

R-Motorsport has shuffled its line-up for Spa, bringing in Austrian Dominik Baumann in place of Alex Brundle alongside Maxime Martin and Marvin Kirchhofer in its second car.