Catsburg told Autosport that he ended up off the circuit "at least four times" in the heavy rain of the final hour of a race he won together with Walkenhorst Motorsport team-mates Augusto Farfus and Sheldon van der Linde.

"It was nearly impossible to maintain the 80km/h speed limit because the visibility was so bad and there was so much standing water," said Catsburg, who claimed the IGTC title together Farfus with victory in the Kyalami 9 Hours.

"I was on the grass, in the gravel and I almost hit a marshals' post.

"I turned into a corner 50 metres too early at one point because I couldn't see where I was going."

Catsburg also revealed that the conditions were crucial in the victory for the Walkenhorst BMW M6 GT3, because they allowed him to close on race leader Frederic Vervisch's WRT Audi R8 LMS GT3 under the yellows.

"Even though there was a FCY, we were still racing because we couldn't do 80km/h," he explained.

"At one point the team told me to take it easy because I was 10s a lap faster than everyone else."

Catsburg moved into the lead after Vervisch, who shared the WRT Audi with Mirko Bortolotti and Charles Weerts, took what is known as a reset pitstop nine laps before the chequered flag.

The Audi came out of the pits side-by-side with the BMW and moved ahead into the first corner, but Vervisch was adjudged to have been behind at the exit of the pitlane and had to give up the lead to Catsburg. 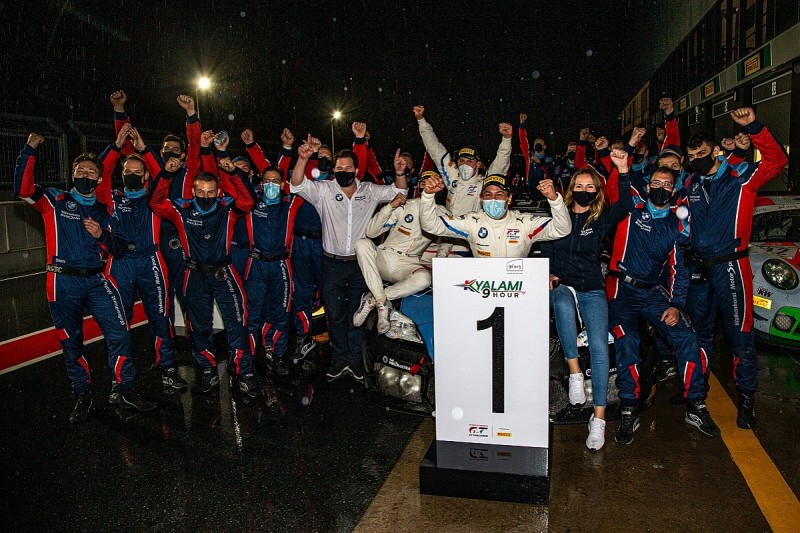 Walkenhorst had brought Catsburg in for his reset stop immediately after an attempt to restart the race with just over an hour to go had to be aborted following one green-flag racing lap.

The stop allowed Catsburg to go to the end of the race without exceeding the 65-minute stint length maximum, but the tactic was a gamble because any protracted period of green-flag running would have meant he required a stop for fuel.

"The team made the call immediately to reset the drive time and they made it perfectly," explained Catsburg.

"They made all the right calls on a day that we didn't have the pace to win in the dry.

"We needed something crazy to happen and it did, so the team can be very proud of the way they handled the situation."

The majority of the race was led by the factory JAS-run Honda NSX GT3 shared by, Renger van der Zande, Mario Farnbacher and Bertrand Baguette, who called their defeat "hard to take".

JAS pitted the car out of the lead with just over an hour to go and the team opted to do a full pitstop, swapping Baguette for Farnbacher and giving the car a full tank of fuel.

Farnbacher took the chequered flag in fourth position behind the safety car, which closed up the field as the nine-hour duration approached.

Second place went to the WRT Audi of Vervisch, Bortolotti and Weerts, while third was taken by the GPX Racing Porsche 911 GT3-R of Patrick Pilet, Matt Campbell and Mathieu Jaminet.

Catsburg questioned the decision not to stop the race in the wet conditions.

"The conditions were so bad at one point that I thought about just driving into the pits and getting out of the car," he said.

"I felt that the race director got it wrong, but maybe he didn't because there were no accidents."