The GruppeM Mercedes will start the opening round of the 2019 Intercontinental GT Challenge, the Bathurst 12 Hour, from pole position after a grid penalty for shootout pacesetter Jake Dennis.

R-Motorsport Aston Martin driver Dennis dominated the single-lap Shootout with a lap of 2m02.494s, which put him four-tenths of a second clear of the entire field.

While Dennis, pictured below on the right, secured the Allan Simonsen Trophy during the initial qualifying session, the #62 Vantage will not start tomorrow's race from pole.

A two-place grid penalty for speeding in the pitlane during regular qualifying means that the GruppeM Mercedes will head the field instead.

Marciello was another star of the shootout in the GruppeM entry, making up a total of eight spots on his regular qualifying position to snatch pole. 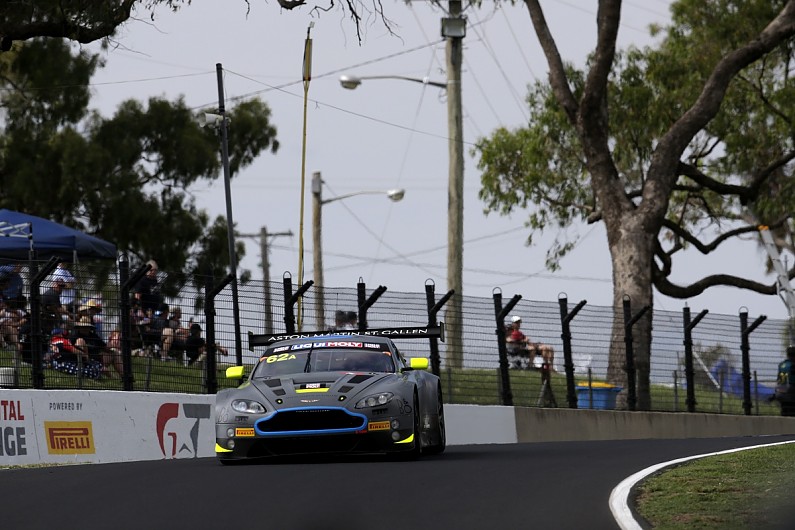 The front row was locked out by Mercedes, with Maro Engel putting the #77 Craft-Bamboo AMG third for the session and second on the grid due to Dennis's penalty.

With the Aston Martin in third, the outside of the second row will be the #107 M-Sport Bentley as Steven Kane made two spots on his original qualifying effort.

David Reynolds dropped three spots to end up fifth, however the #777 Erebus Mercedes was still the best of the Pro-Am cars.

Kelvin van der Linde's lap started in wild fashion as the South African ran wide at Hell Corner and left himself with plenty to do.

But he recovered well, putting the #22 Audi sixth on the grid, a spot better than he managed earlier today.

Matt Campbell put the #912 EBM Porsche seventh on the grid, losing time in the final sector after going purple in the second, while Yelmer Buurman lost four spots compared to regular qualifying to grab eighth on the grid.

Christopher Haase dropped a couple of spots to qualify ninth in the #2 Audi, while Alex Imperatori was unable to improve on his regular qualifying position in the #18 KCMG Nissan, which means the car slots on the outside of the fifth row tomorrow morning.

Watch the Bathurst 12 Hour live and free on Motorsport.tv