Maro Engel and Mercedes are the winners of an inaugural GT World Cup in Macau that ended in hugely anti-climactic fashion.

There were two and a half laps remaining when hapless backmarker John Shen, who had been lapped by the first few cars, crashed his Porsche at Moorish while the field was running behind the safety car, causing a chain-reaction accident behind as the track was suddenly completely blocked.

Engel had inherited victory in the qualification race on Saturday when on-the-road winner Stefan Mucke was penalised for braking after accelerating on the restart from an early safety car, dropping the Aston Martin driver to third behind Audi's Edoardo Mortara.

Mortara made a great start to the World Cup itself, only for the torquey Mercs of Engel and Renger van der Zande to thunder past between the Reservoir and Mandarin kinks, while Mucke shouldered his way past Mortara for third into Lisboa.

Engel pulled out a gap as team-mate van der Zande held off Mucke, Mortara and the second Audi of Rene Rast, but the complexion of the race changed on lap 12 of the scheduled 18.

Van der Zande sustained damage to the left-rear bodywork due to a thump from Mucke while he was bottled up behind Shen at the Melco hairpin, and Mucke got a run on him down to Lisboa.

Contact was made again between the Merc and Aston, and the opportunist Mortara dived inside both of them to take second, while Rast was able to fight his way up to third ahead of Mucke and van der Zande.

Shortly afterwards, Vutthikorn Inthraphuvasak crashed his Porsche at the Solitude Esses, bringing out the safety car under which Shen would crash, preventing what would have been at least a one-lap sprint to the chequered flag.

The best of the outpaced McLarens was that of Alvaro Parente, who lost sixth place to the Aston Martin of Darryl O'Young at half-distance.

The sister McLaren of Kevin Estre ran into Richard Lyons's Aston at Lisboa on the first lap, ending both their races, while Earl Bamber retired his Porsche after contact with the barrier at San Francisco Bend.

"I'm happy and proud to be the first winner, but especially proud of my team," said Engel who, like team-mate van der Zande, crashed heavily in qualifying.

"I made a big mistake in qualifying, and I was there standing on the wall thinking I'd blown my opportunity to win this race.

"Once I got into the lead I put my head down and tried to focus on my driving to build a gap."

UPDATE: Mortara has been penalised for jumping the start and falls from second to sixth in the results. Rast and Mucke now complete the podium behind Engel. 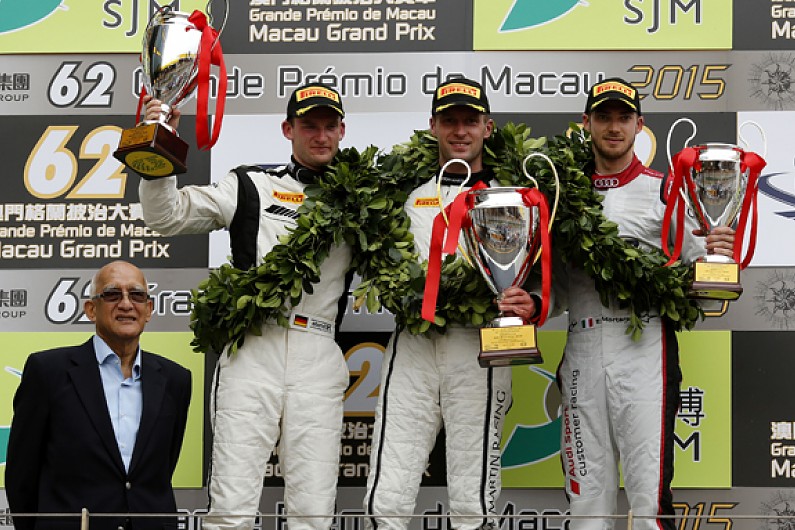