The Nordic team of Tom Kristensen and Petter Solberg won the Race of Champions Nations Cup in Barbados, defeating the British entry in the final

The battle came down to a deciding race in the best-of-three final using Ariel Atoms around a special two-lane configuration of the Bushy Park circuit, with Kristensen leading home David Coulthard by almost three seconds.

Coulthard was in the hunt until the final corner, when he ran wide into the gravel (pictured above), handing Kristensen a clear run to the chequered flag.

Kristensen had earlier won the opening heat of the final, beating Susie Wolff with both driving the Audi R8 LMS.

Coulthard then levelled the tie by beating World Rallycross champion Solberg in a race using the Volkswagen Polo RX by over two seconds, setting up his head-to-head with Kristensen.

The Nordic team reached the final by defeating French pairing Romain Grosjean and Esteban Ocon in the previous round.

Both teams emerged from a four-team group in which the Americas team of Robby Gordon and Jose Maria Lopez and the Young Guns entry of Jolyon Palmer and Pascal Wehrlein were eliminated. 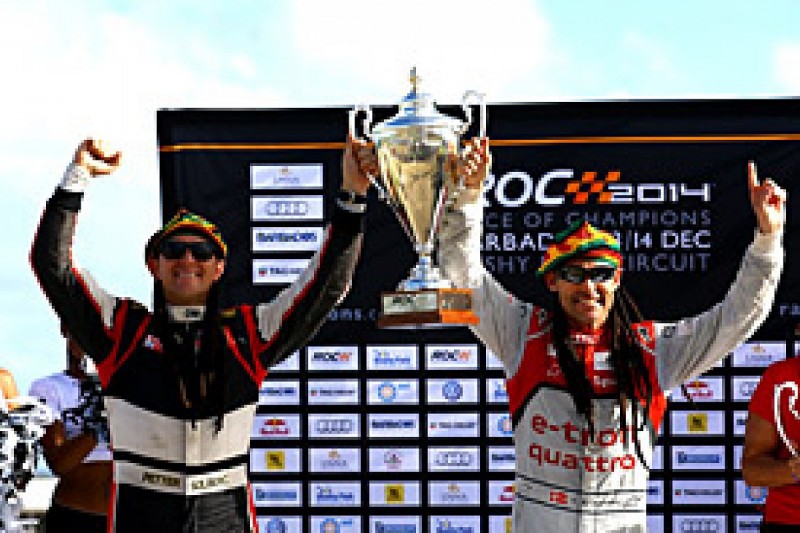 Lopez had a particularly eventful time in the group stage, suffering an engine problem and retiring in his ROC Buggy race against Wehrlein.

He later rolled his Stadium Super Truck while head-to-head with Grosjean.

In the other half of the draw, the British team beat the surprise package Barbados squad of Rhett Watson and Dane Skeete to reach the final.

Both teams qualified for the semi-finals from a group also containing the USA team of Ryan Hunter-Reay and Kurt Busch and Australians Jamie Whincup and Mick Doohan, with Wolff and Coulthard winning five of their six races.

The Race of Champions itself, which is an individual competition, takes place on Sunday.