Fittipaldi led home Harrison Newey for each of his two wins, the Briton putting in his best performance of the 2015-16 MRF campaign but unable to quite get close enough to challenge the new champion.

It is the third title in cars for Fittipaldi, who moves up from Formula 3 to Formula V8 3.5 with Fortec Motorsport this season, following on from his 2011 Junior NASCAR honours and his '14 Formula Renault BARC crown.

"It means a lot, and it's great to have something else to put on my CV," said Fittipaldi.

"I start 2016 with one foot forward, and that gives me a boost. Also, Fortec were champions in 3.5 last year so I have full confidence that everything will be good and they'll give me everything I need.

"I also have to thank my manager Fernando Plata [the 1989 class B British Formula 3 champion], who is always coaching me - that helps a lot."

On his debut in the MRF Challenge, Mick Schumacher finished third in the first race of the weekend, then went one better with second in the reversed-grid finale.

That race was won by Alessio Picariello, the Belgian taking the most convincing victory of the weekend to make up for a spectacular crash in the first of the reversed-grid races.

The accident happened in the closing stages, when Picariello vaulted over the cockpit of local hero and race leader Tarun Reddy.

The crash meant Nikita Troitskiy took the win, the Russian having moved up from sixth earlier on when Schumacher collided with Tatiana Calderon, and Newey took to the grass in avoidance.

Calderon took third place in the weekend finale to ensure herself second in the championship ahead of Troitskiy. 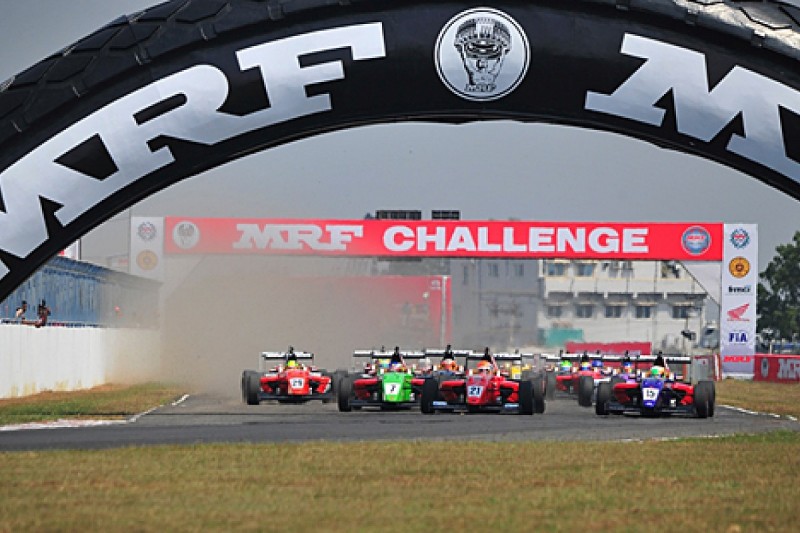