Hallbery’s love of racing came from being brought up watching speedway at Wembley but also going to grands prix around Europe. He was drawn to the Brabham team and started a fanzine when attending the London College of Printing. This was his calling card in 1986 when he came for an interview for the first step on the Autosport ladder as editorial assistant.

Helping to produce the magazine meant long nights at the typesetters, but he got to try racing in the Ford Fiesta Challenge and then the Mondello Park 2CV 24 hours.

Hallbery cut his reporting teeth in the GM Lotus Euroseries and loved it, especially as most of the races were on the grand prix support programme, so he swapped Mallory Park for Monaco. History relates that he had a special group of drivers in 1990, as Rubens Barrichello won the title with Gil de Ferran and David Coulthard not far behind.

Then came his happiest years, following the DTM around Europe. This was where he spent time with the Franchittis, and Dario remembers: “We had a ball from Helsinki to Hockenheim and a spin on the Nordschleife in my company Mercedes.” 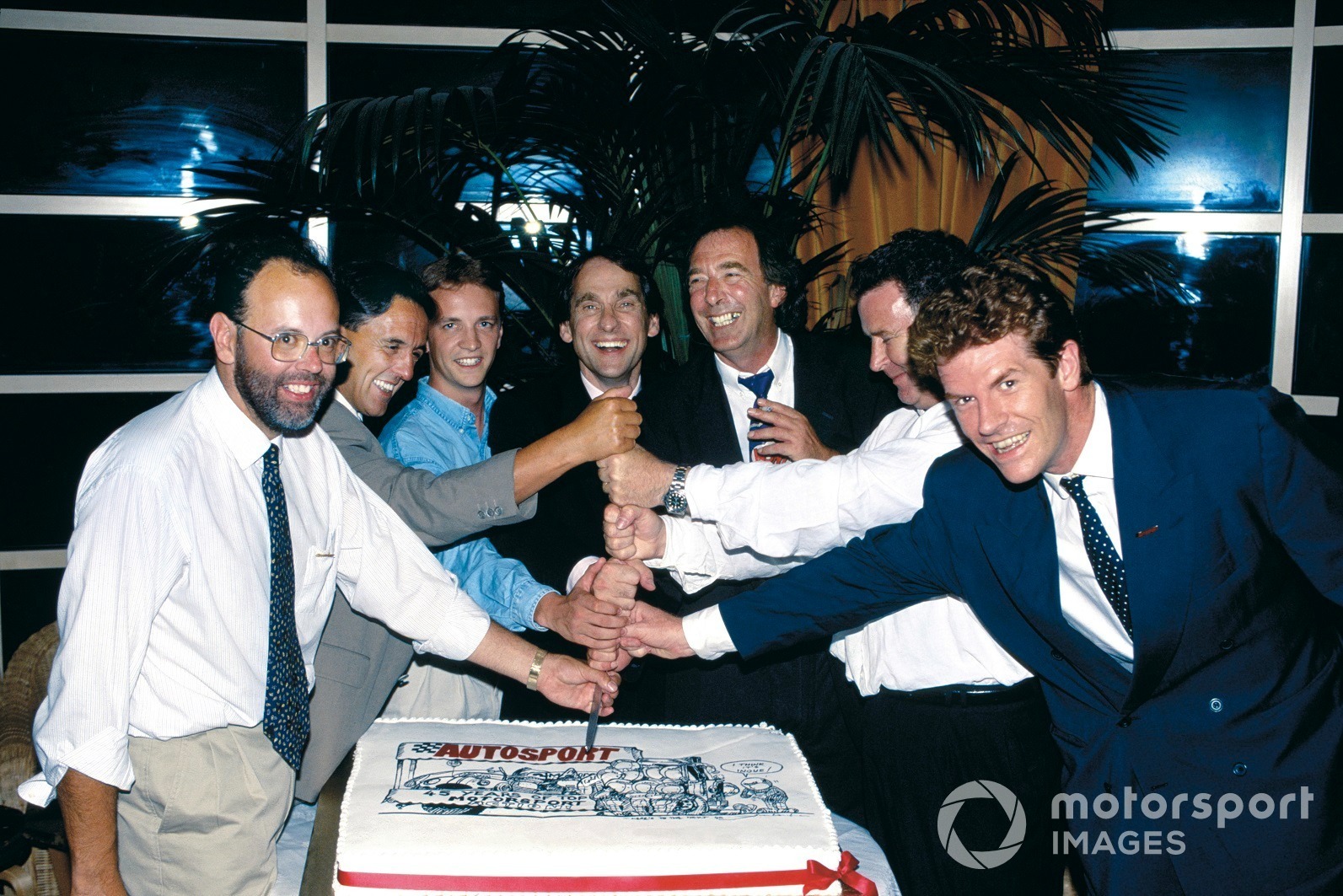 In 1992, he was promoted to editor, meaning less travel and more in his in-tray, but he soon decided that his expertise was better suited to working on editorial projects and so leapt at the chance to head up Haymarket’s new Special Projects department. It was a job that got his creative juices flowing, starting with the Stars & Cars magazine for Mercedes, memorably recreating the Oasis What’s The Story Morning Glory? cover shot very early one morning in London with Dario Franchitti.

The biggest change of Hallbery’s working life came when he transferred to Racer magazine in California in 2001. Not only did it take him to tracks he’d only dreamt of as he followed the Indycar trail, but it reunited him with Franchitti and de Ferran. “Andy was there the morning after my first Indy 500 win,” recalls Dario, “organising a photo in which I was surrounded by milk bottles and had a painted-on milk moustache. Only for Andy would I do that.”

The highs were many, but the lows of losing good mates Greg Moore and Dan Wheldon were very low. Another friendship forged was with Bryan Herta, the pair drawn together by their love of music, even though his love was Depeche Mode. 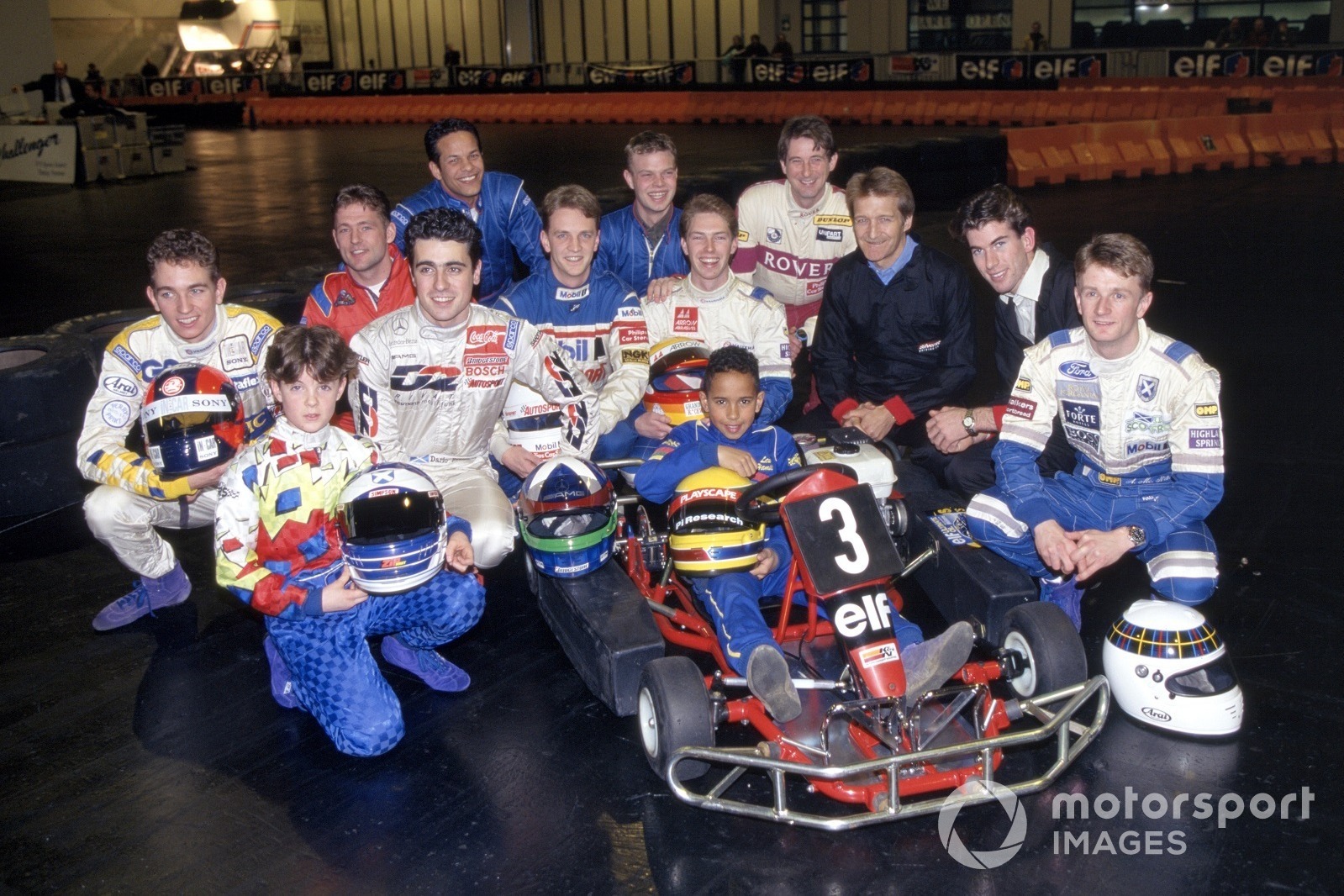 Since returning to the UK, Hallbery produced two brilliant books, co-writing The Romance of Racing with Dario and later Lionheart on Wheldon’s glories in the Indy 500.

Recently, he enjoyed going back to the grassroots level in the UK and was at a foggy Silverstone for the Walter Hayes Trophy meeting in November. Running parallel with the racing, he moved to Cardiff and was at a concert at least once a week, revelling in it all.

Hallbery lived a life he loved and was liked and respected as someone who really knew his stuff and, as Dario concludes, “brought a real rock and roll feeling to the sport”. 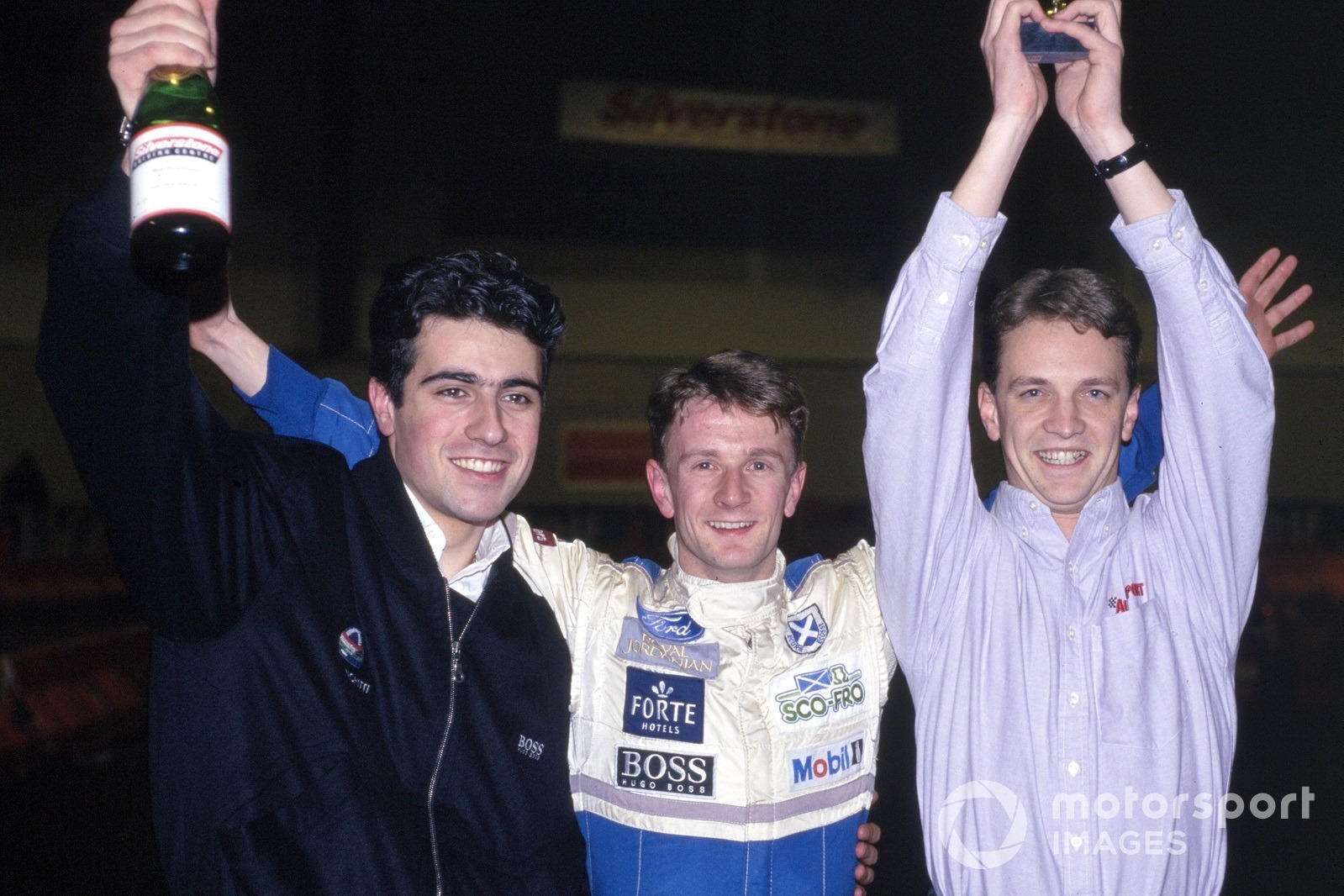 When I was introduced to Andy, my first thought was ‘he’s too young to be editor of Autosport’. But he wasn’t and he was brilliant.

In the pre-internet age, when Autosport was still where we got our up to date information on the world of motor racing, ‘Strawberry’ brought a real rock and roll feeling to it.

Foub, Laurence, Gordon, Andy, Laura and the whole gang at Haymarket became friends, and they were instrumental in me getting my Mercedes DTM deal. We had a ball from Helsinki to Hockenheim, had a spin on the Nordschleife in my company Mercedes plus a visit to London to recreate Oasis’s What’s the Story Morning Glory? album cover for Stars & Cars magazine.

Andy was there the morning after my first Indy 500 win organising a photo in which I was surrounded by milk bottles and had a painted on milk moustache. Only for Andy would I do that. 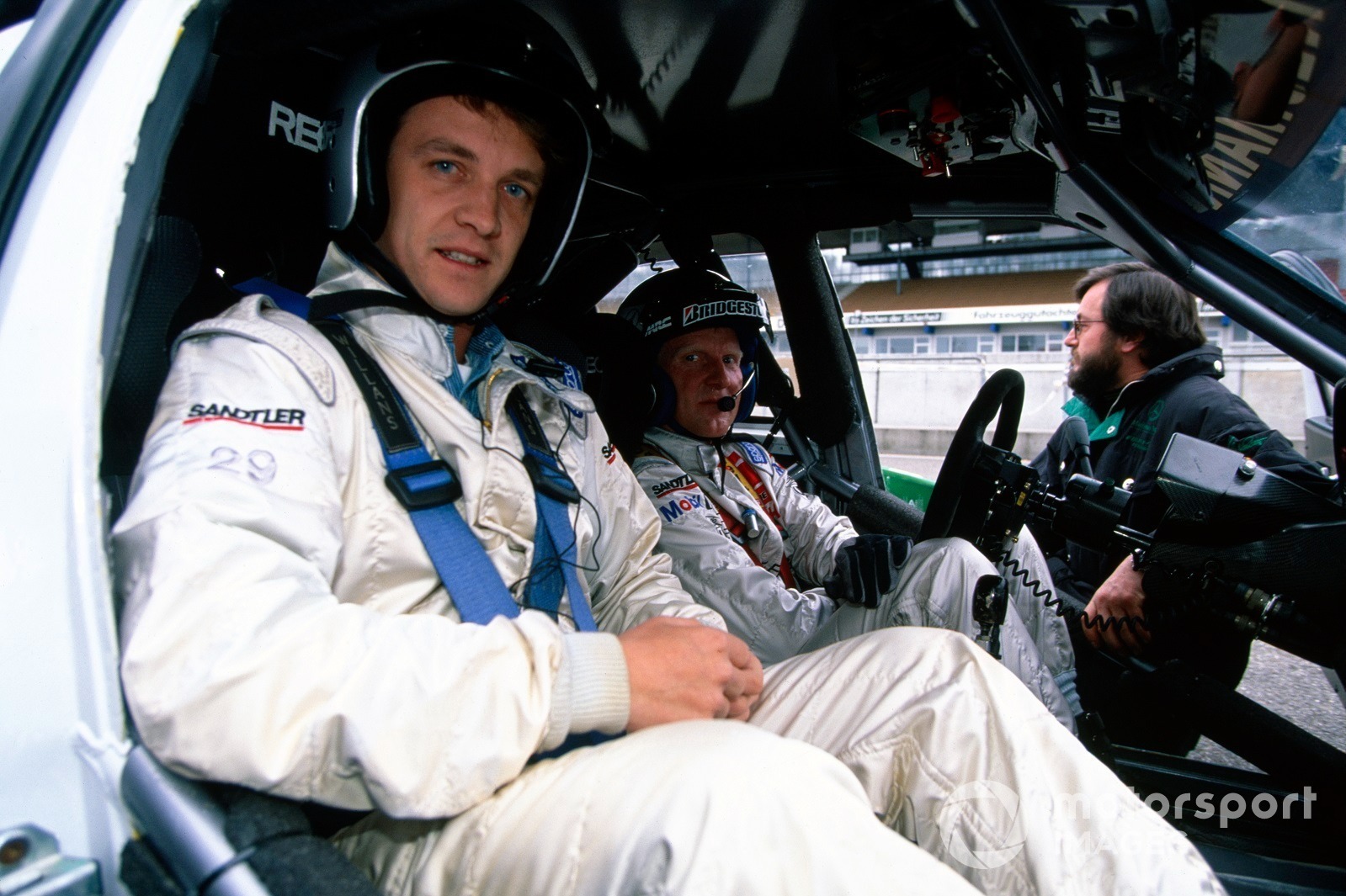 He loved all racing and had very strong opinions on drivers. Nelson Piquet was his favourite but in his early days Tom Pryce was his driver. A young Andy went up to Tom at the 1975 British GP to ask for his autograph, but this was minutes after he had crashed out of the lead and Tom replied ‘f*** off’. This was most unlike the kind Welshman, but I’m sure the adrenaline was still flowing. So, career lesson one for young Hallbery was on how to deal with racing drivers…

We did a book together Romance of Racing and all of Andy’s hard work, wonderful writing and passion was on full display. We had some heated discussions about who to include and who to leave out. Afterwards, we talked about doing a second book to be titled ‘Those We Cannot Believe We Forgot To Include In The First book’.

My favourite memory of Andy was a few days spent hanging out with Greg Moore, Gordon Henderson, my brother Marino and Andy in Florida back in 1998. He later wrote about it in a tribute to Greg. Go find it on the internet, it’s worth a read.

Andy faced some pretty big challenges over the last 10 years or so, but never lost his love of racing or his incredible gift for writing about it. As I wrote in a book that I signed for him ‘this is a great book but all the good stories remain untold…’

Rest in peace Andy and thank you. 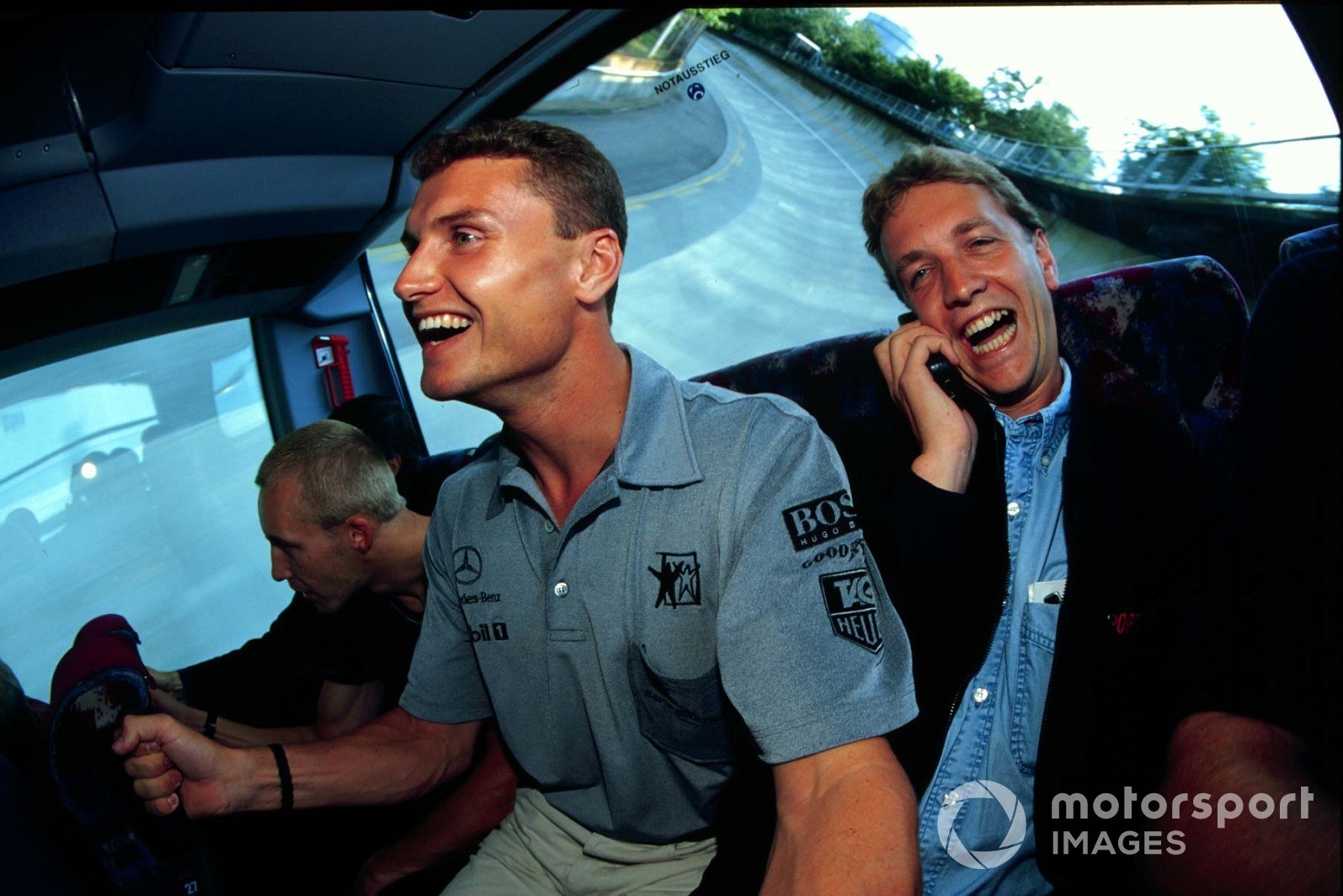 Schumacher and Vettel team up at 2023 Race of Champions