This weekend its comeback begins with the Mid-Wales Stages. JACK BENYON analyses its prospects.

What is the bravest move a championship can make? Shaking up the rules package? Perhaps putting a new kingpin in charge? No. The answer is folding.

That's exactly the step the Motor Sports Association took in 2014 with the British Rally Championship struggling.

For three years the series had exclusively featured Citroen DS 3 R3 cars, a front-wheel-drive car slower than Group N machinery, at the front in a decision steered by commercial factors. Hardly the kind of equipment most would expect a top-level national championship of the BRC's pedigree to focus on.

"I was on the panel to assess the tender [for running the BRC] and when we reviewed them, none of them cried out as a winner. I said 'I think IMS can take this on'," he recalled.

But though the MSA top brass approved that decision, they did so with the proviso that the series must take a year off as Taylor had to prioritise running Rally GB and researching what 'new BRC' should be.

Decisions then came thick and fast.

Allowing R5-specification cars was the first, a hark back to the four-wheel-drive days of the BRC and commitment from the organisers that they were going to provide for the quickest machinery readily available - R5s flat-out in the right hands having beaten mid-level World Rally Car runners in the WRC.

The huge Junior class prize of a subsidised season in the WRC-supporting Drive DMACK Trophy followed, along with a television deal encompassing Channel 4 and BT Sport.

Then came the star names, headlined by Elfyn Evans. Though Malcolm Wilson favoured Mads Ostberg and Eric Camilli for his plum 2016 WRC seats, Evans proved his class by blitzing the competition in WRC2 on the opening rounds, despite stern opposition from local specialists in Monte Carlo and Sweden. He'll complete a full BRC season for the DMACK outfit.

There's also major foreign interest. This is often a barometer of the strength of a national championship, as the Super Touring era British Touring Car Championship's allure to overseas racers and ex-Formula 1 drivers proved. People coming over from Australia to tackle the BRC has to be a good sign.

So has the new BRC been pitched right?

Taylor was not 100 per cent behind the decision to can it for 2016, fearing that competitors, teams and spectators might realise they didn't miss it - such had been its decline.

He now admits it was the right decision. The BRC has got the right cars, the right rules, and certainly the right rallies.

It's no coincidence many in rallying are predicting the series will recapture the dizzying heights of the 1980s and '90s eras when people saw it as a viable alternative to the WRC.

There's still work to do. The plan for year one was always about the competitor and attracting the numbers. With more R5s than you would see in most WRC2 events, the BRC has certainly done that.

But the rebuild isn't complete. A title sponsor is missing, and a few of the rallies need help to move on from being provincial local events to international counters that should be attracting big manufacturers and sponsors. That's the next step.

Rome wasn't built in a day, as the old adage goes. Yet the BRC has built at least two-thirds of what it was trying to construct. All the signs point to a great championship this season, and it's been achieved from nothing over the past 18 months.

For the full story of the fall and rise of the British Rally Championship, see this week's Autosport magazine - available in shops and online now - and the current edition of our sister publication Motorsport News 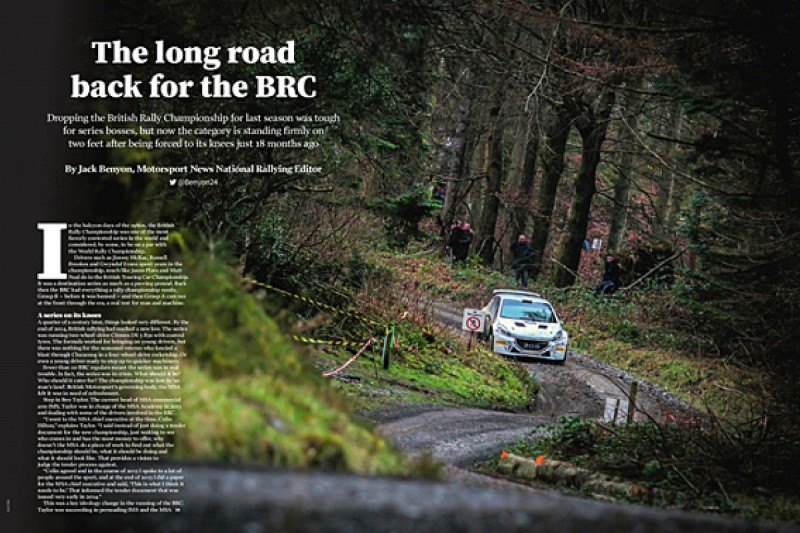