The 49-year-old was 18 seconds behind at the 10km mark of the time trial, with the first cyclist to complete the route, Australian Stuart Tripp, setting the pace.

But Zanardi had a strong finish, overhauling Tripp over the second half of the route to take the gold medal by 2.74 seconds with a time of 28m36.81s.

"It has been a long journey, which basically started the day after the London games, when I decided that I would focus on a new horizon in my life and that this would be Rio," said Zanardi.

"After the exciting years of preparation and coming here to a course that was not really my kind of course, it is just fantastic to finally enjoy the taste of gold once more.

"I have to admit that it was hard when I realised after the first lap that I was only third and almost 20 seconds behind.

"But nevertheless I kept cranking, following my plan, executing my project. And I really pulled off a miracle on my second lap: not only I did not slow down, but I actually managed to increase my average power and sprint towards the end.

"So to win a gold medal by just 2.7 seconds like this is even more tasty than otherwise. 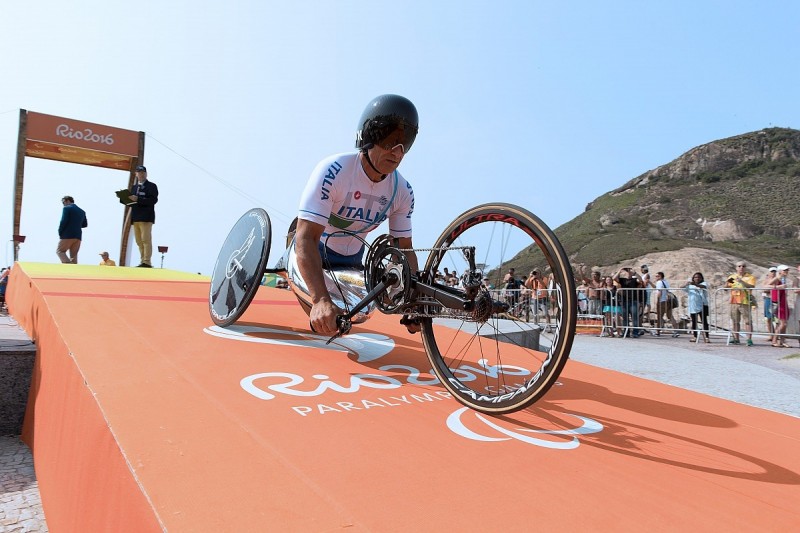 The time trial was the first of three events Zanardi is contesting in Rio, with the second being the road race on Thursday and the third on Friday when he will be part of the three-man Italian team in the H2-H5 team mixed relay.

"This race will be a gamble," he said of the road race. "I am pretty sure that all will be decided in a sprint towards the finish.

"I have a great chance. But this is what everybody is thinking.

"It will be a thrilling race. I will do my best and the key will be to stay out of any trouble."

Zanardi, who won the H4 time trial and road race at London 2012, is competing in his second Paralympics after first taking up handycling in 2007 and moved into the H5 class three years ago.

Thursday is the 15th anniversary of the Champ Car accident at EuroSpeedway Lausitz that cost Zanardi both of his legs.