Ferrari Formula 1 junior driver Leclerc had taken a dominant victory in the 27-lap race ahead of Artem Markelov and Rowland, but the two standings leaders were excluded from the results following scrutineering "due to excessive wear to the underfloor plank", according to an F2 statement.

"Both cars were subjected to the usual post-race scrutineering checks, which is when the damage was noted on both vehicles," it continued.

"The planks were removed and measured, with the thickness recorded as below the allowable limit."

Markelov and Rowland were already under investigation for an incident at the last corner of the race where the Russian driver went off the track as he battled his DAMS rival, but had enough traction to steal provisional second place at the line.

They were each handed a five-second penalty for the incident - Rowland for "forcing a rival off track" and Markelov for "exceeding track limits and gaining an advantage".

Those penalties cancelled each other out before Rowland was disqualified.

The change to the results means that Russian Time's Markelov is promoted to race winner - his first victory since winning the Austria sprint race - with his team-mate Luca Ghiotto now second. 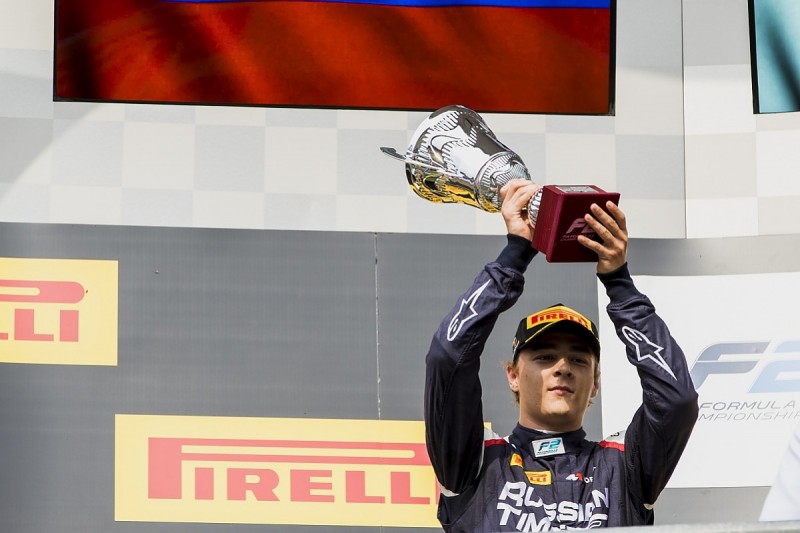 Norman Nato will now start Sunday's sprint race from pole position after being boosted up to eighth by the change of results.

Leclerc's disqualification from what had been his sixth victory of his rookie F2 campaign is the second time in two rounds that he has been removed from the final classification of a session.

Last time out in Hungary he lost what would have been a record-breaking seventh consecutive F2 pole due to his car having an illegal brass shim in its differential.

Prema opted not to appeal the decision and explained that the wear to Leclerc's plank had occurred inadvertently.

"In addition to being minimal (less than 0.2 millimetres on one of the seven holes of measurement) the damage was accidental and accentuated by the characteristics of the Belgian circuit," read a statement sent out by the Italian team.

Markelov and Rowland have also had high-profile on- track incidents so far this season.

Rowland got a penalty for forcing the Russian driver off track during the Silverstone sprint event, while in the Hungarian feature race Markelov crashed out while attacking his rival for the lead late on.

With Leclerc and Rowland disqualified from the feature race, the Monegasque driver's standings lead remains the 54 points he had after topping qualifying.

Markelov is now eight points further back from Rowland in third place.