It was announced late last night that Ferrari Formula 1 junior driver Leclerc had lost his dominant seventh win of the season due to excessive wear on his car's underfloor plank.

Prema boss Rene Rosin explained that one of seven measurement holes on Leclerc's plank was worn just enough to disqualify the car.

"Six of them were ok, one of those - the top right - there was 0.4mm above but right on the edge, if you move just a couple of millimetres inside you were ok,' he told Autosport.

"[But] we were 0.2mm below the conformity measurement."

Rosin reckons the damage occurred at specific left-handers with high kerbs at Spa as Leclerc raced to what was a race-winning margin of 26.6-seconds.

"Considering the topology of the circuit, the exit of corner nine, the exit of Blanchimont - when [drivers] really go on the kerb and have very high speeds, so a lot of downforce - on the kerb you can damage the plank," he said.

When asked if there was anything Prema could have done to mitigate against high plank wear, Rosin outlined his belief that raising Leclerc's ride height would not have made a difference.

"We could [have] just taken a bit more margin or rise the car up a bit more, but it's not rising up the car that makes the difference because the kerbs and bumps are there whatever your ride height is," he said. 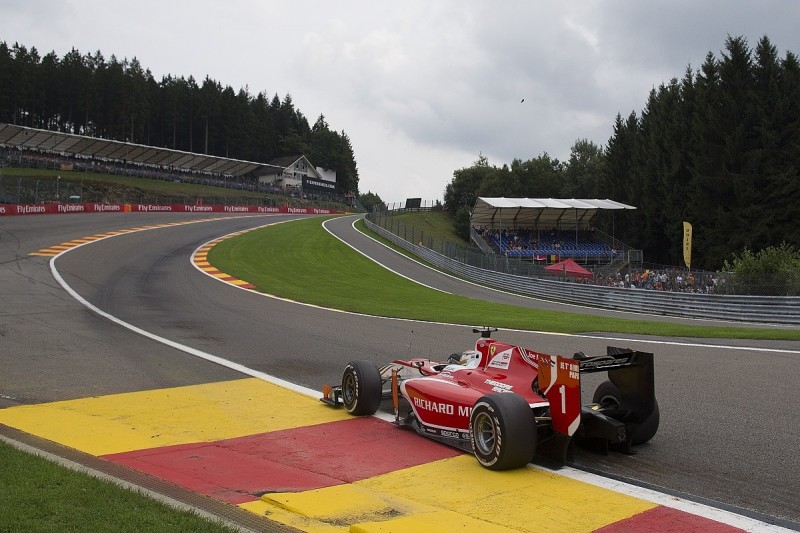 Leclerc was also disqualified from qualifying last time out in Budapest after an illegal brass shim was fitted to his differential.

Rosin insisted that while he found the decision to strip the Monegasque racer of his win hard to take, his team had not made any changes to gain performance.

"I'm not against [the decision] - the FIA has all the rights and has the grounds to do that, there's nothing wrong on it - but on the other hand it's difficult to accept," he said.

"We need to make sure that as a team these mistakes cannot happen anymore because they are silly mistakes that are not performance gains.

"There could be gains if you go really low, that's true, but when we are speaking about 0.2mm in one out of the seven holes and all the others were far inside the measurements, that's not performance."

DAMS boss Francois Sicard believes that the damage to Rowland's plank occurred in similar places on the track to Leclerc.

"It was worn a lot more than we were expecting, mostly because of the right-hand side of the plank was damaged," he told Autosport.

"We think we damaged the plank on the kerb, maybe outside of Blanchimont or something and it wore out the plank a lot and we were below the limit.

"It happened also to Charles, so at least it balanced the problem for the championship.

"It's always a shame to lose such a podium, but we have to accept the decision of the stewards."

Sicard also lamented the engine problem that stopped Nicholas Latifi from starting the feature race in second place alongside Leclerc, but vowed to come back strongly at Monza next weekend.

"[Latifi's problem] was a broken valve and then the valve went into the piston and the piston exploded," he said.

"A very unlucky weekend because if you look at the pace we are P2, P3 - fast in the dry, fast in the rain.

"Even if Charles is still a bit ahead I think we were planning to make him [have a] hard life during the race with the two cars and unfortunately it was not possible.

"Now we are focused on Monza, we are pretty good in Monza and we will try to push him once again."