Ferrari Formula 1 junior driver Charles Leclerc topped Formula 2 practice at Spa, despite missing much of the session after his car's cockpit fire extinguisher was activated

Only a third of the 45-minute session had elapsed when Leclerc, who leads the F2 championship by 50 points over Rowland, had to slow.

The Monegasque driver had put in a best time of 1m57.681s when the extinguisher went off just after he ran over the kerbs at the entry to Eau Rouge and he was forced to return to the pits.

His Prema racing team worked hard to replace the extinguisher and Leclerc was able to rejoin the action for the final two minutes of the session, but did not have enough time to complete another timed lap.

After the mid-session lull, there were few improvements as Fuoco and Rowland, who had been second and third after the early running, were not able to better Leclerc's time as he sat waiting for his car to be fixed.

Running on the medium Pirelli rubber looked to be a handful for several drivers, with Jordan King - who ended up 18th fastest - and Artem Markelov among the drivers sliding off-track at the left-hand Turn 9, which comes just after the Bruxelles hairpin.

Despite that, Markelov was ultimately fourth quickest for Russian Time ahead of Campos Racing driver Ralph Boschung and Arden International's Norman Nato. 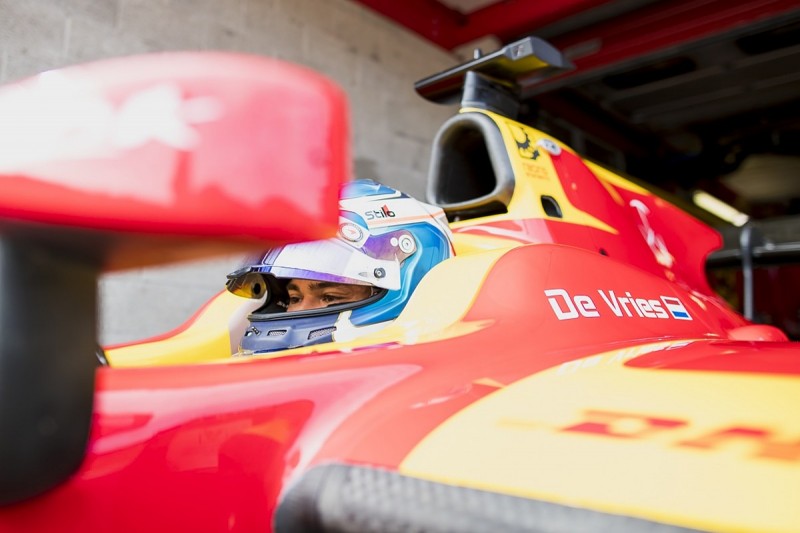 McLaren F1 junior Nyck de Vries, making his first appearance for Racing Engineering after switching from the Rapax squad ahead of the Belgian round, finished seventh quickest in front of Sean Gelael.

Gustav Malja, who ended the session with the quickest times in the first and third sectors, was ninth overall, and Nicholas Latifi completed the top 10 in the second DAMS-run car.

Louis Deletraz, who swapped seats with de Vries, was 15th in his first session for Rapax.

His new team-mate - former F1 driver Roberto Merhi, who is replacing Sergio Canamasas this weekend - brought up the rear of the field in 20th.