Dan Ticktum claimed victory in a delayed first Formula 2 race of the Sochi weekend that saw title contender Guanyu Zhou spin out on the lap to the grid.

Ticktum made the most of his reverse grid pole position to win the only sprint race of the F2 weekend after wet weather prompted organisers to issue a revised Saturday schedule.

The Carlin driver ultimately cruised to victory after surviving pressure from Juri Vips to claim his second F2 win of the season by 4.422s.

Luckily for Zhou, his error was not punished as championship leader Oscar Piastri missed out on the points in ninth.

In contrast to the torrential rain that forced the race to be postponed to the afternoon, the encounter began with the field on slicks on a damp but drying track.

The race start was delayed by five minutes to clear the wreckage of Felipe Drugovich’s crashed UNI Virtuosi machine after the Brazilian crashed on his way to the dummy grid.

Drugovich’s team-mate Zhou also suffered a spin on the sighting lap, but although he had no damage, the Chinese driver was unable to re-fire his engine and forced to vacate his seventh spot on the grid.

The top three quickly broke away from the chasing pack, with Ticktum under heavy pressure from Vips and Lawson. However, with DRS disabled from the start of the race due to the conditions, Vips' chances to pass were made more difficult. 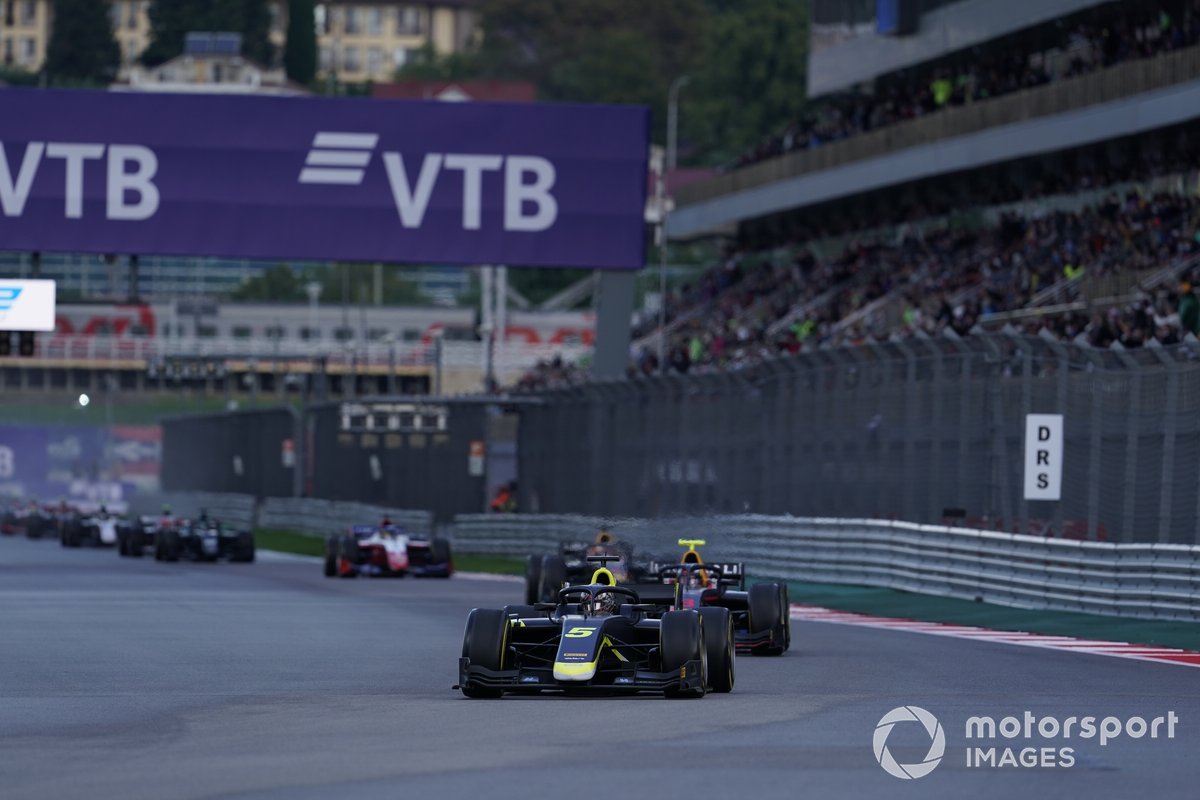 Ticktum led all the way from the front

The race was neutralised under a virtual safety car when Bent Viscaal spun on lap 5, with the Trident driver coming to a halt in a dangerous position at Turn 15.

Once racing resumed, the action ignited as Piastri dropped from ninth to 12th. But worse was to follow for third-placed Lawson, whose contact with the Turn 13 wall put him out of the race and triggered a second virtual safety car period.

At the front, Ticktum seemed in control as he opened up a comfortable lead over Vips, with Shwartzman now sitting third ahead of Jake Hughes, Ralph Boschung and Theo Pourchaire.

The order changed on the restart as Jehan Daruvala passed Pourchaire and Boschung into fifth, but the Indian driver threw it all away with a spin three laps from the flag, dropping to 12th at the finish.

Vips began to eat into Ticktum’s lead in the final quarter of the race but he couldn’t deny his rival the win, while Shwartzman completed the podium.

Following the cancellation of the second sprint race due to earlier weather delays, the F2 field will return on Sunday for the feature race at 1120 local time (0920 BST). Piastri will start the race from pole position alongside Daruvala.