The top three started on the rapidly degrading supersoft tyres, with Louis Deletraz and Callum Ilott jumping polesitter Sette Camara to run line astern until the pit stops at the end of lap six.

Because of how quickly the tyre dropped off, as the lap count ticked past six the drivers who started on the soft tyre - much more durable than the supersoft - moved ahead, with Deletraz's Carlin team-mate Nobuharu Matsushita heading Guanyu Zhou of Virtuosi Racing for most of the race as the top two cleared off into the distance.

Renault junior Zhou hauled in a gap of over five seconds to catch Matsushita with five laps to go, but Matsushita pitted and got the undercut on his rival to emerge in fourth.

The supersoft tyres proved as much as seven seconds a lap quicker than those who had took the softs at lap six, and Matsushita and Zhou hauled in Deletraz to take second and third.

But Sette Camara made the most of the dicing team-mates and disappeared up the road, the Brazilian taking a first F2 feature race win.

He had looked adrift of Deletraz in the middle of the race, but at the end of the stint the Brazilian began to close in and he made the decisive move at Turn 8 on lap 28/31.

The win that appeared to be Deletraz's to lose was soon Sette Camara's to take in comfortably his best F2 performance for DAMS. 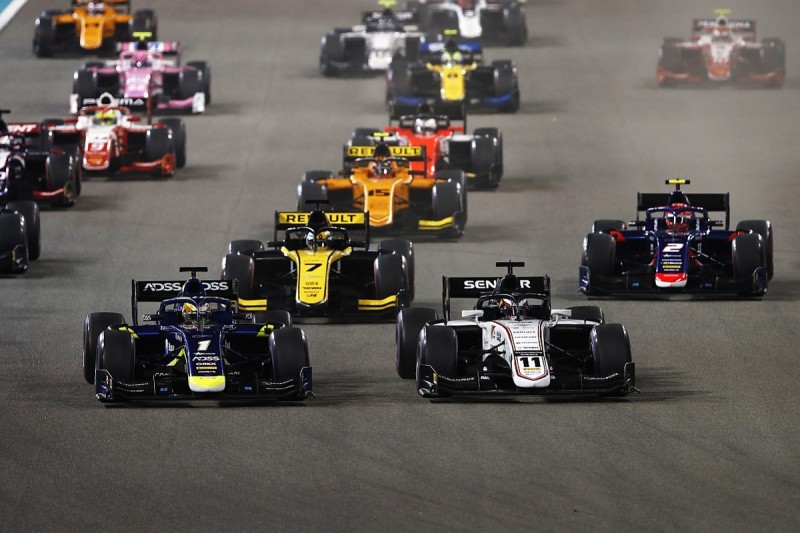 His victory sealed the teams title for DAMS, and boosts his championship as he moved past Luca Ghiotto into third in the standings, and is only six points off team-mate Nicholas Latifi in second with Sunday's race remaining.

Top rookie Zhou scored his fifth podium of his rookie year, fighting the much more experienced Matsushita all the way.

Deletraz just held on for fourth ahead of Ferrari junior and Sauber Junior Team driver Ilott, who couldn't live with Sette Camara and Deletraz's pace on the soft tyre in the middle of the race.

Ghiotto - Zhou's Virtuosi Racing team-mate - took sixth from 10th on the grid and crucially finished ahead of title rival Latifi.

Latifi lost time as DAMS double-stacked its drivers in the pitstops - arguably still a good decision as the alternative was to leave him out on old supesoft tyres - but he made up the places lost again on track in an excellent second stint to take seventh and second on thr grid for Sunday's race.

Mazepin's team-mate and 2019 F2 champion Nyck de Vries had a nightmare race where he took 13th from sixth on the grid as he struggled with his tyres.

The new Mercedes Formula E driver finished three spots behind team-mate Mazepin, despite the latter starting at the back of the grid.