Schumacher: No malice by team-mate Gelael after France F2 crash

Ferrari Formula 1 junior Mick Schumacher believes there was no malice intended from his Prema Racing Formula 2 team-mate Sean Gelael, who sent Schumacher into an airborne crash

On the opening lap of the Paul Ricard feature race on Saturday, Gelael struggled to slow enough at Turn 3 and crashed hard into the rear-right of Schumacher's car.

The German driver was sent into the air, and had a puncture immediately after landing. Gelael stopped immediately, while Schumacher made it back to the pits, but with too much damage to continue.

"There's not much to say today, what happened was very unfortunate," said Schumacher.

"Still it is a shame, since we had a good start and looked confident that we would have fought for the top five.

Both Prema cars were eliminated on the first lap after this huge shunt for Gelael and Schumacher#FrenchGP ?? #F2 pic.twitter.com/Icb1UuQQiS

"But then of course, nobody does something like that on purpose, especially not their own team-mate.

"About the incident itself I cannot say too much, suddenly my car was lifted in the air and unfortunately it was too badly damaged afterwards.

"Obviously, I'm going to give all I have and try my best in the race tomorrow, then we'll see what we are able to achieve."

Gelael apologised to the team for the incident, which is being investigated by the stewards following the race.

"I had a good start, then Matsushita went wide at the exit of Turn 2.

"I had a good run and tried to get alongside him, with my front wing close to his rear tire. 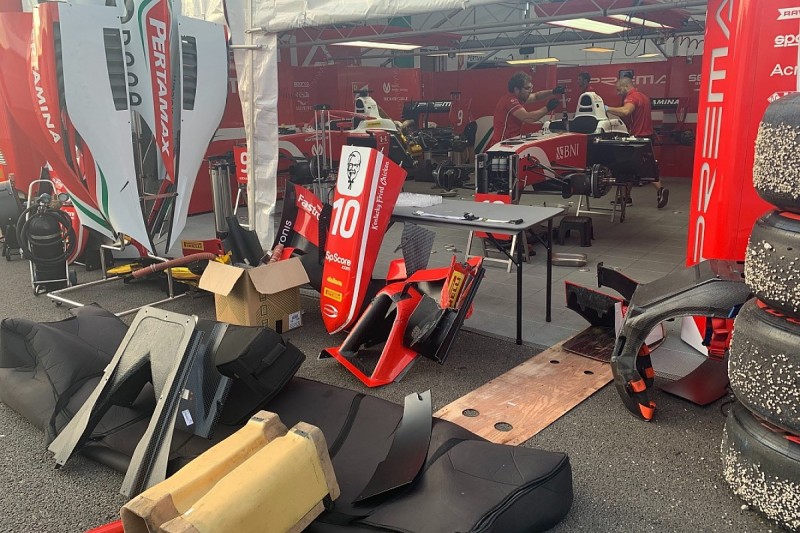 "Just before the corner, in the kink, he moved a bit under braking and that caused me to go completely on the inside.

"As the inside was dirty, I was having trouble to brake.

"I tried as hard as I could to stay clear of trouble but I ended up T-boning Mick.

"In the end, it was a mistake from me maybe to try to overtake, but there was also a bit of movement under braking which caused me to be significantly more off-line than I should have.

"It was even more of a shame that it was Mick because we were in a good position.

"This is my first lap 1 incident this year.

"It's a bit annoying to make these kind of mistakes, it hurts and I'm sorry for the team."

Raghunathan banned from Austria F2 round after VSC infringement