Rowland, who completed his first full season in the championship when it was known as GP2 in 2016, won the feature race ahead of his DAMS team-mate Nicholas Latifi and finished second in race two.

As a result, he cut championship leader Charles Leclerc's points advantage to 50 heading into the summer break.

"I think [it was] my best performance in GP2/F2," he told Autosport.

"The pace was good, I was confident, I was comfortable and I felt good all weekend."

"It doesn't get much better than that.

"I'm happy, I'm learning more and more every time with the tyres and the starts."

One of the areas where Rowland's performance appears to have fluctuated this season is at the start.

He explained that his system of operating the F2 car's clutch did not necessarily produce the fastest launch, but did deliver consistency - and it was those around him who made his starts look better or worse.

"My start in race one [when Artem Markelov jumped him off the line] was quite good - I always seem to be in the unfortunate position where, when it's important, the person next to me always seems to get a better one," he said.

"My start [in race two] was my best one of the year, so it's getting better and I'm comfortable.

"My way is not amazing but it's consistent, so I should be there or there about every time." 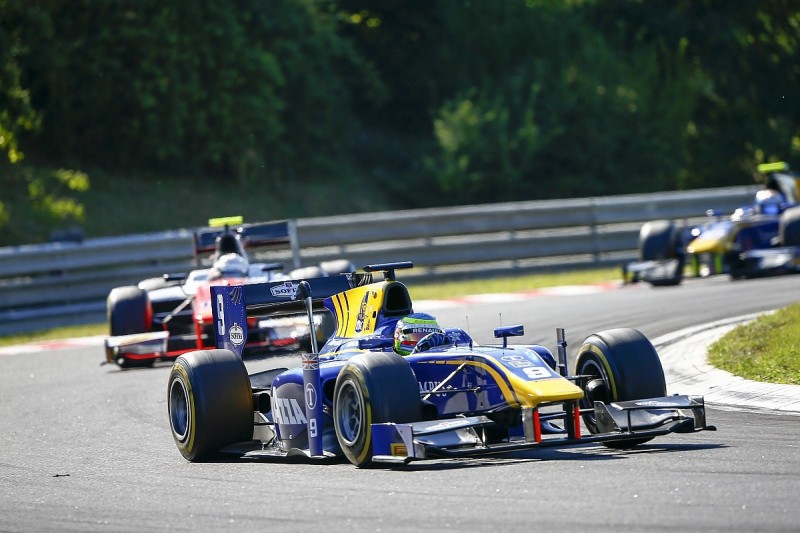 Rowland struggled for pace following a late-race safety car in race one, which led to Markelov's late attack and dramatic exit.

He said he learned from that experience to avoid taking the best out of his tyres in the sprint race at the Hungaroring.

That left him well placed to attack Luca Ghiotto and Nyck de Vries when they struggled for grip and move into second behind winner Nobuharu Matsushita late on in race two.

"From the start of the race I wanted to manage everything, and yesterday I made a mistake in how I was with the tyres, so I stayed calm and was there or thereabouts the whole race," he said.

"I was waiting, I had good tyres, but they had the grip to defend so there was no point in trying.

"Then I saw Luca starting to struggle and Nyck was pushing so I thought I'd better get close in case something happens.

That move [on Ghiotto at Turn 9] - Daniil Kvyat did it to me in 2-litre in 2012, actually [he] crashed into the side of me - but I knew that you could surprise somebody there.

"I knew he was struggling, he'd just been passed by Nyck, so I thought I needed to sting him quickly whilst he was in a bit of a panic."